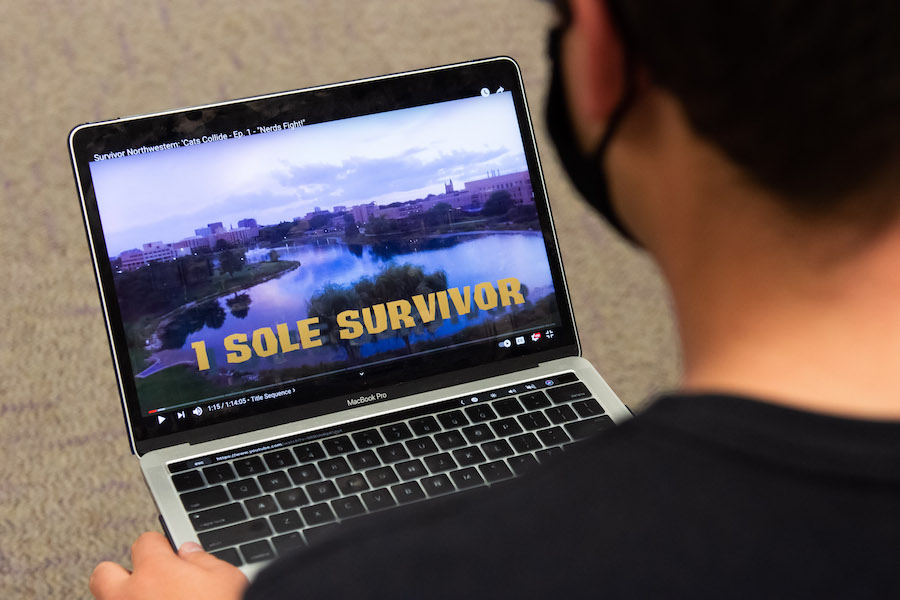 A student watches the inaugural episode of “Survivor Northwestern.” The show is a spinoff of the hit CBS show “Survivor.”

One hundred thirty days, 22 castaways, one “sole survivor”: on Thursday night, ‘Cats Collide(d) in the premiere of the inaugural season of “Survivor Northwestern,” a spinoff of the hit CBS show “Survivor.”

“Survivor Northwestern” began two years ago as a mimic of other colleges’ remaking of “Survivor.” Due to COVID-19, the first season was filmed half in-person and half virtually, while the second and third seasons were filmed completely virtually. The show has the same basic rules as its namesake, with a few exceptions to accommodate being a student on campus.

Communication junior Kylie Boyd, who was a player in the first season and subsequently became a host for Season 2, said she enjoyed the experience of joining the group as a freshman for Season 1.

“It was so much fun, especially as a freshman coming into the school not knowing anything and being thrown into this crazy game,” Boyd said. “Once we were kicked off campus halfway through the year, we had to do the rest of it virtually… so it was a really cool way of staying socially connected with people despite being on Zoom.”

Boyd said the group had so much fun filming the first season, members decided to make “Survivor Northwestern” into a full-fledged organization with a production team for the next year, despite still being virtual.

Communication junior Sami DeVries was also a cast member in her freshman year and is now the group’s casting director. DeVries echoed Boyd’s thoughts on how much she enjoyed being a player in the show, which led her to want to become more involved in the group.

DeVries said the process is always changing for casting in each season of the show.

“It’s a really fun process and not too stressful because it’s just talking to people and getting to know them,” she said. “I’m asking the same questions every interview, so it’s exciting to find someone who makes me lean in and want to know more.”

Dengler said he was interested in video editing, but the task was time-consuming. However, he said he is excited to see the premieres of the episodes he edited.

“The actual process is a lot of watching the footage we record and coming up with the best way to tell the story. It’s like documentary style, slice-of-life storytelling,” Dengler said. “Editing in reality TV is a lot about creating the narrative, creating the way you want to tell it when you release information.”

He added he is excited to see the team grow, something Communication senior Gus Moody agreed with. Moody was a castaway on the first season and has since become a host for the show.

Unlike his peers, Moody said he had never seen “Survivor” before. But he was looking for a community to become a part of and found that in the group. Although being a player on the show was fun, Moody said he enjoys being a host and getting to know the castaways from a different perspective.

Reminiscing on filming Season 1, Moody recalled a scene that did not air in the first episode where he talked negatively about his fellow castaway, Boyd.

“There’s a great moment that wasn’t aired in the episode, but I just ranted about her even longer,” Moody said. “(I said), ‘I don’t think she’s a hero, she’s the villain of the season,’ and I know that by heart because Kylie and I always rewatch it because now we’re best of friends.”

Although the season just premiered on Thursday night, the group said it has been getting positive feedback from viewers and from other college “Survivor” clubs at the University of Maryland, University of Michigan and more.

The group used a Google Form to collect responses from viewers, and the first episode currently has more than 450 views.

“It’s been cool to see the interest from people we don’t know on campus,” Boyd said. “It’s not huge right now, but it’s cool to see people watching it and it being something entertaining to people.”