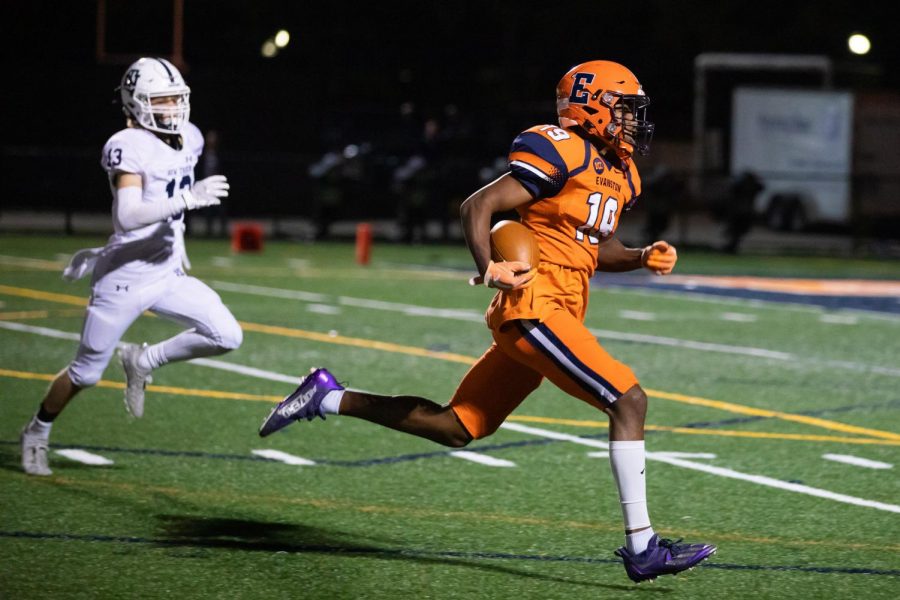 Senior receiver Kamau Ransom bolts to the end zone on a 65-yard touchdown. The host Wildkits knocked off New Trier 38-24 for their first win in the rivalry since 2010.

Ahead of Evanston Township’s rivalry game against New Trier on Friday night, senior wide receiver Kamau Ransom told anyone who would listen that he’d score on the first play.

When the Wildkits offense took the field for the first drive, Ransom did exactly that, dashing past his man on a go route and hauling in a 52-yard touchdown pass from junior quarterback Dylan Groff.

The source of Ransom’s pregame confidence? An anticipated one-on-one matchup with no safety help, along with words of motivation from the coaching staff.

“They were telling me that if I didn’t catch it, a sub would be coming in for me,” Ransom said. “I told them, ‘ain’t no sub coming in.’”

The scoring didn’t stop there. Behind two receiving touchdowns from Ransom and two rushing scores from senior running back/linebacker Sebastian Cheeks, Evanston Township (3-2, 1-0 CSL South) blew past the Trevians (3-2, 0-1) in a 38-24 rout and captured its first win over their archrivals since 2010.

“August 9 came, and we talked about milestones this year,” coach Mike Burzawa said. “Beating New Trier was a milestone for us and I couldn’t be more proud of the kids.”

Playing in front of a roaring crowd on homecoming weekend, the Wildkits’ offense dissected New Trier with big plays through the air and on the ground.

Ransom torched the Trevians’ secondary with five receptions for 164 yards and two touchdowns, while his quarterback finished the night with 297 passing yards and 69 rushing yards. By halftime, Evanston Township had boosted its lead to 24-7.

New Trier coach Brian Doll, who competed in the rivalry as a player, said the Trevians did not expect the Wildkits’ offensive approach at all.

“We played absolutely horrible,” Doll said. “The first play of the game set a bad tone for us, and we didn’t really respond from it tonight.”

For Cheeks, a UNC commit, the crosstown rivalry was incentive enough to return for his senior season.

Last season’s matchup, held on April 3 after the postponement of the fall season, left a bitter taste in the Wildkits’ mouths, with a goal-line stand sealing New Trier’s 14-7 win. This time around, Cheeks — who primarily plays linebacker — redeemed himself by rushing 11 times for 119 yards and two touchdowns.

“This is one of, if not the only reason I came back this year,” Cheeks said. “The situation I was in, not scoring on the goal line in a clutch moment, it stung me. I’ve been waiting for this game for months.”

Evanston Township didn’t let up after halftime, extending its lead to three touchdowns by the fourth quarter. New Trier’s offense finally built traction in the passing game in the final frame, with senior quarterback Nevin Cremascoli passing for two scores, but the Trevians couldn’t mount a rally to extend their rivalry win streak to 11 games.

First held in 1913, the rivalry between the two North Shore high schools now sees its all-time record updated to 55-52-6 in favor of Evanston Township. While the most recent installment didn’t go down to the final minutes, the intensity of the matchup elevated the stakes for both teams.

“We haven’t beaten them in a very long time,” Cheeks said. “I’m soaking this all in right now. I knew that number, and it’s our time to start the streak.”

— Summer sports get going at ETHS with updated mask regulations