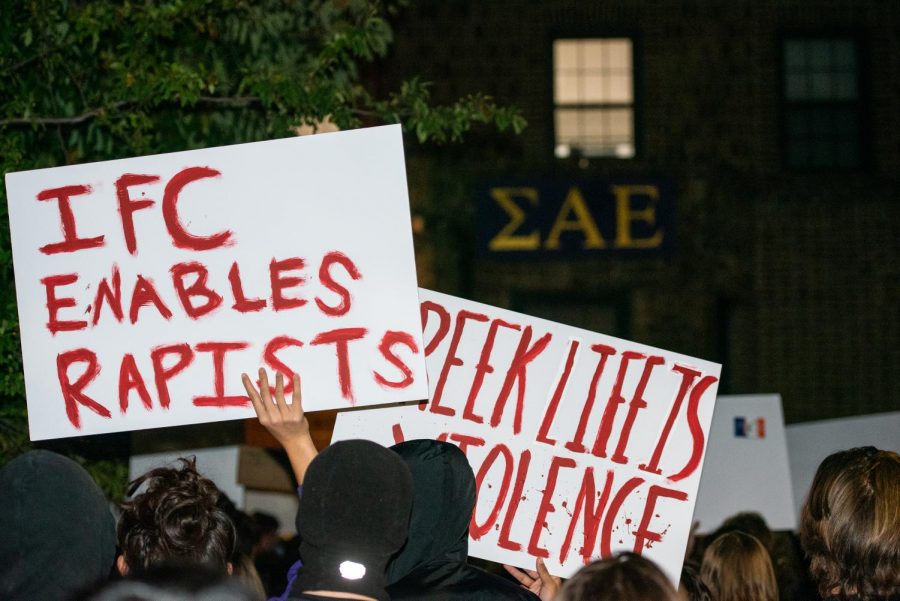 Students hold protest signs in front of Sigma Alpha Epsilon, one of the Northwestern fraternities involved in a series of student druggings.

Content warning: This story contains mention of drugging and sexual assault as well as explicit language in audio clips.

Until an organizer’s shout cut through the air: “Abolition is not the end! It is the beginning!”

The crowd cheered and shouted back in response. Soon after, students hurled eggs, which splattered against the AEPi house’s walls.

The protest, held outside the on-campus houses of Sigma Alpha Epsilon and AEPi Sunday night, followed two University Police crime notices. According to the Friday notice, multiple individuals reported they were drugged at an AEPi house event, and according to the Saturday notice, another individual reported they were drugged at an SAE house event. The Saturday notice identified both addresses as on-campus fraternity houses, though the Friday notice did not. Neither notice identified the fraternities by name.

Sunday’s action was part of ongoing advocacy to remove Greek life at Northwestern. The alleged druggings have spotlighted the movement to end Greek life on campus and brought historic violence in fraternity spaces to the forefront.

As students take action, they look to the future and wonder: What would it look like for NU to replace the Greek system with safer communities, and how can the University better support survivors?

At 7 p.m, protesters prepared posters on SAE’s lawn. Some signs targeted SAE and AEPi with phrases like “Say bye bye to AEPi and all frats,” while others addressed Greek life as a whole: “IFC enables rapists.” “Not too late to disband.”

The crowd gathered on the sidewalk in front of the house and poured onto the lawn. Students held their posters to the house, though blinds covered the windows.

They chanted: “How do you spell rapist? SAE.” “Silence is violence.” “Out of the frats and into the streets.”

Around 7:45 p.m. demonstrators moved to the AEPi house. “1-2-3 f–k SAE,” they chanted. “3-4-5 f–k AEPi.” Some protesters banged on AEPi’s door and others spray-painted the sidewalk in front of the house with “abolish Greek life” and “f–k rapists,” among other phrases.

UP, Evanston Police Department and officers from Allied Universal, a company contracted by the University, patrolled the protest. Officers stationed themselves around the SAE house, on the street and outside the AEPi house.

At the demonstration’s end, Medill sophomore Maggie Sullivan, the event’s organizer, urged students to look out for each other’s safety and stop attending parties hosted by fraternities.

A history of harm

Calls for the removal of Greek life from campus are not new. An Instagram page began posting anonymous, firsthand accounts of sexual assault, racism, homophobia, classism, ableism and misogyny within Greek life in spring 2020. Waves of individual members then deactivated from their chapters and some of NU’s IFC and Panhellenic Association Greek chapters disbanded.

But some chapters continued to recruit new members last year, and they plan to continue recruiting this school year.

Opposition to SAE’s presence has deep roots on campus. The University suspended the fraternity in April 2017 after a report that four women were drugged at the house that January. Despite the report, the chapter faced no disciplinary action from NU, and returned to campus on probation in 2018 after completing a one-year suspension.

In 2017, IFC moved to cease recognition of SAE until 2021 after the chapter violated its suspension by recruiting new members and engaging in actions that “continued to make the Northwestern community less and less safe,” IFC wrote at the time. However, IFC allowed the chapter to rejoin the organization in September 2018 as an associate member with no IFC voting power.

In response to this weekend’s events, NU’s Associated Student Government has banned IFC and PHA from holding or applying for Senate seats. IFC was unable to comment on the story. NU’s SAE and AEPi chapters did not respond to The Daily’s requests for comment.

“Just the tip of the iceberg”

Alongside the Saturday crime notice, the University announced the suspension of all IFC social events and chapter-sponsored recruitment events until at least Oct. 17 — but some community members have said the ban is insufficient. A Weinberg senior who wished to remain anonymous said she came to protest because she feels NU needs to take further action.

Since assaults in fraternity houses have occurred repeatedly throughout the years, she said the only way to end the harm is to end Greek life. She called SAE a “blatant example” of the system’s irreparable flaws.

“This is the first week that they’ve been allowed to have parties on campus,” she said. “This was their second chance. This was supposed to be what fixed them and they’re supposed to come back better and they clearly did not. You need to get rid of (Greek life), because it is the system and the institution itself.”

No specific disciplinary actions have been taken directly against either AEPi or SAE by either NU or IFC.

This weekend’s allegations will be reviewed by the Office of Community Standards and all University Hearing and Appeals System procedures, as outlined in the Student Handbook, will be followed, University spokesperson Jon Yates told The Daily when asked about further sanctions beyond the Oct. 17 ban.

The senior is a survivor of sexual assault, and said she knows “too many people” who have been drugged and assaulted at NU. She’s calling for the University to not only end Greek life’s presence on campus, but also create safer community spaces for students in the future.

“If we just get rid of Greek life, these things are just gonna go underground,” she said. “We need to put systems in place to support survivors… and create community and make sure this doesn’t keep happening.”

Sullivan, the organizer, advocates for the abolition of Greek life. She believes residential colleges would provide alternative communities.

While the night’s protest focused on fraternities, Sullivan said it’s important to look at the harm sororities have caused as well.

“(Sororities) are by no means exempt from the long history of discrimination, oppression (and) exclusion that upholds these systems at their core,” Sullivan said. “We need to make sure that we’re seeing the bigger picture and seeing that the entire system has problems, not just places where sexual assault is rampant.”

Weinberg sophomore Rakin Hussain, who led chants throughout the night, said he also came to support survivors. After having an experience similar to that of the survivors — though unrelated to Greek life — they said they felt it was their responsibility to fight for those the system has harmed.

He said the turnout touched and surprised him, especially given the protest’s short notice.

“Seeing everybody out there really warmed my heart,” Hussain said. “The fact that it was a s–t ton of people and everybody came out with their friends and the message proliferated like wildfire — that was one of the most beautiful things that I have ever witnessed.”

Hussain emphasized that the recently reported cases are “just the tip of the iceberg.” They echoed what Sullivan said at the protest — there are many more survivors who are silent, and it’s crucial to advocate for them.

“Abolition is not the end, it is the beginning”

Sullivan said more actions will happen later this week and encouraged students to keep an eye out for more information. She said continued pressure is crucial to change campus culture. In addition to showing up for demonstrations, Sullivan also urged the crowd to stop attending parties hosted by fraternities.

Abolition isn’t solely about destruction, Sullivan said. It’s about reimagining new systems to replace those that cause harm.

“It’s easy to just say, ‘Burn everything to the ground,’ and that feeling is justified,” Sullivan said. “But I don’t think that we can just leave frats in the dust without seriously evaluating our support system for survivors, which is very negligible right now. And it’s not surprising that there are many people who don’t come forward because they don’t feel confident in the system.”