“We Walk” celebrates Black history with access in mind 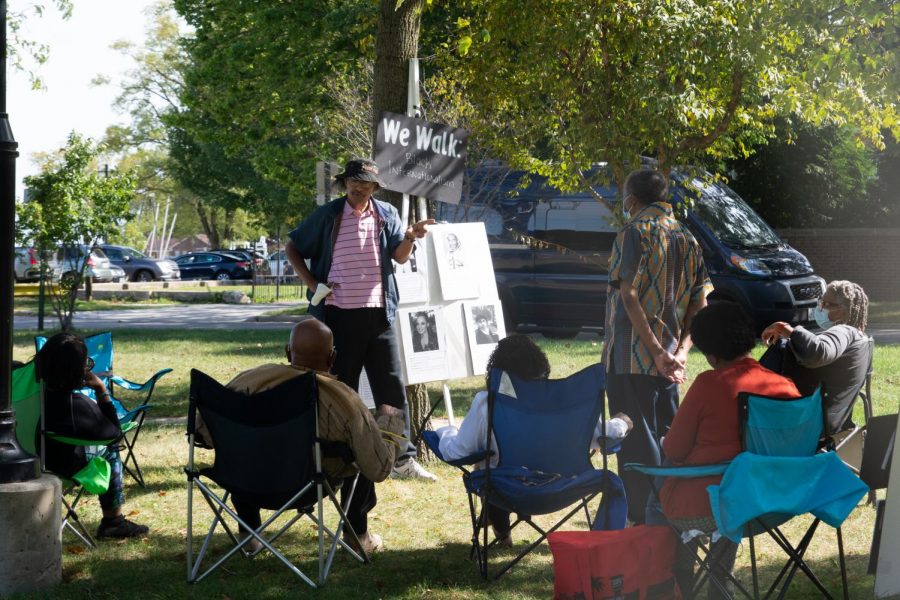 The Haitian American Museum of Chicago and Crossing Borders Music Sunday afternoon to host “We Walk: A Celebration of Black Community” at Dawes Park.

The professor of African American studies at an Illinois high school described how he discovered his family’s Black and Indigenous history. He traced his ancestry to Angolan King Dago Gonwelão and Angolan Maroons who left colonial English Virginia to live with the Saponi tribe.

As a Maroon, Davis said sometimes it’s uncomfortable to talk about the past, but that it can also be empowering.

“We’ve learned to keep it secret,” Davis said. “(But)… it’s uncovering those stories, those links, those truths that can bring us together.”

Davis’ presentation was one of three different booths in the “We Walk: A Celebration of Black Community” event hosted by the Haitian American Museum of Chicago and Crossing Borders Music. The exhibition highlighted the Black American community’s contributions to art, science and music in America’s history.

HAMOC hosted “We Walk” for the first time in October 2020 as a way for museum members to engage with the community despite being shut down due to the pandemic.

Sunday’s event was the second time HAMOC hosted the exhibition, this time with support from an Evanston Arts Council grant meant to support arts in the community. HAMOC plans to host the exhibition again next month in North Lawndale.

Carlos Bossard, executive director of HAMOC, said the museum’s main goal is to educate others about the contributions and history of the Black community. He said, at its core, a museum is about engaging with the public and sharing knowledge. With “We Walk,” Bossard said, people don’t have to come to the museum — the museum comes to them.

“We’re bringing the education to them in a very easy, accessible way,” Bossard said.

Sunday’s exhibition featured three different booths and a musical performance. The booths focused on the Underground Railroad, the Illinois Trail of Tears, Black internationalism and Black inventors and scientists.

Tom Clowes, executive director of Crossing Borders Music, said he hopes performers can use music as an avenue to express Haitian culture in a way they feel is accurate and representative.

“I think it can transcend boundaries of language and distance to change and open hearts and minds,” Clowes said.

For Bossard, including music within the event not only allows for an informational and musical dimension to the exhibition but also allows the performers to connect with Black composers in their own way.

Bossard said emphasizing and uplifting Black history was a way to give back to the community, especially after the disproportionate toll COVID-19 took on Black communities.

— ETHS students reflect on equity work in the classroom