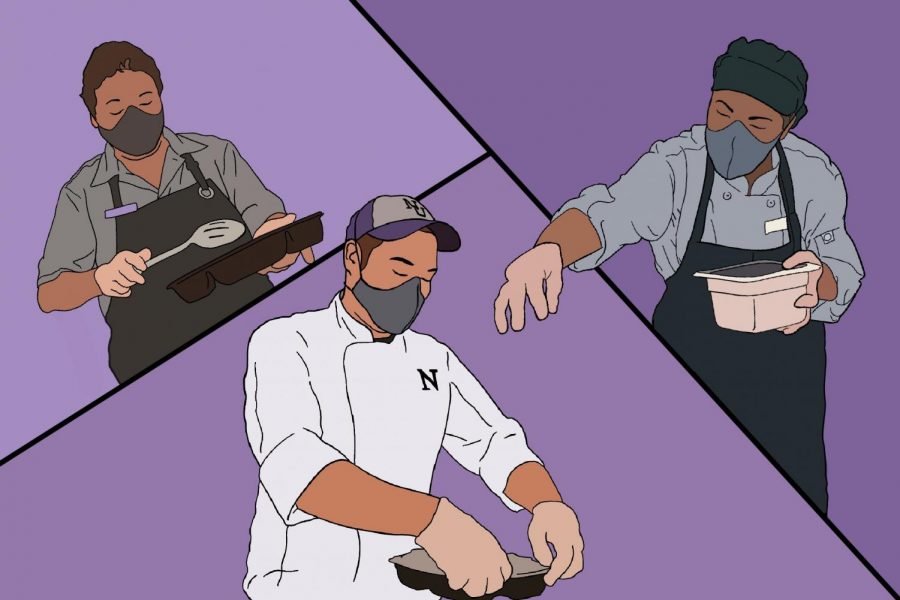 Northwestern dining workers. Many subcontracted workers at Northwestern will wear buttons on Sept. 30 stating, “I don’t want to strike, but I will.”

Students Organizing for Labor Rights released a petition Friday supporting the authorization of a strike by Northwestern’s subcontracted dining and service workers.

The workers voted Wednesday to authorize a strike, following two years of negotiations in which Compass did not fully meet workers’ demands. The petition has over 500 signatures, according to SESP junior and SOLR member Neva Legallet.

“What makes a strike successful is the community being aware of it and supporting those who are essentially striking,” Legallet said. “It really needs momentum from the community, and so my hope is that students understand what’s going on with workers and want to get involved.”

SOLR is also planning an open meeting where students can hear from workers about their struggles and how they hope to proceed, Legallet said.

SOLR has collaborated with the workers and their union, UNITE HERE Local 1, to provide support throughout the pandemic and amplify their voices. Since March 2020, the organization has raised over $130,000 through their monthly donation fund, which they redistributed to workers, Legallet said.

“The associates represented by the union are vital members of the Northwestern community, and Compass is a trusted partner to the University,” University spokesperson Jon Yates wrote in an email to the Daily. “We understand the importance of the ongoing contract negotiations between the union representing the food service workers and their employer, Compass. We hope for a swift and equitable resolution to these negotiations.”

NU’s workers are not the only ones going on strike. DePaul University dining workers, who are contracted through Chartwells, voted to authorize a strike the day after NU’s workers did the same.

SOLR also encouraged students to “button up” with workers on Sept. 30, when workers will wear buttons stating, “I don’t want to strike, but I will,” Legallet said. SOLR will hand out buttons to students outside the dining halls.

Compass’ previous offer to workers, which the union declined, would have provided an immediate $2 raise to all workers, a one-time ratification bonus and over 20% raises over the duration of the contract, Compass spokesperson Sophia Bamiatzis said in an email to The Daily.

“We value our associates and want to give them raises,” Bamiatzis wrote. “We have offered better terms as shared previously, however, legally we cannot deviate from the compensation requirements laid out in the previous (Collective Bargaining Agreement) until a new agreement is reached.”

Bamiatzis added that although Compass Group is aware of SOLR and its petition, they are focused on negotiating with UNITE HERE Local 1.

Legallet said the workers’ requests are long overdue and encouraged students to get involved and engage with the workers, adding that campus would not be able to function without them.

“It’s incredibly meaningful to workers when students explicitly acknowledge that they’re aware of the struggles (workers) are facing, and that they want to help,” Legallet said. “Having those conversations with workers is very reassuring for them because potentially going on strike is a huge commitment and hearing that there’s student support is really important to them.”