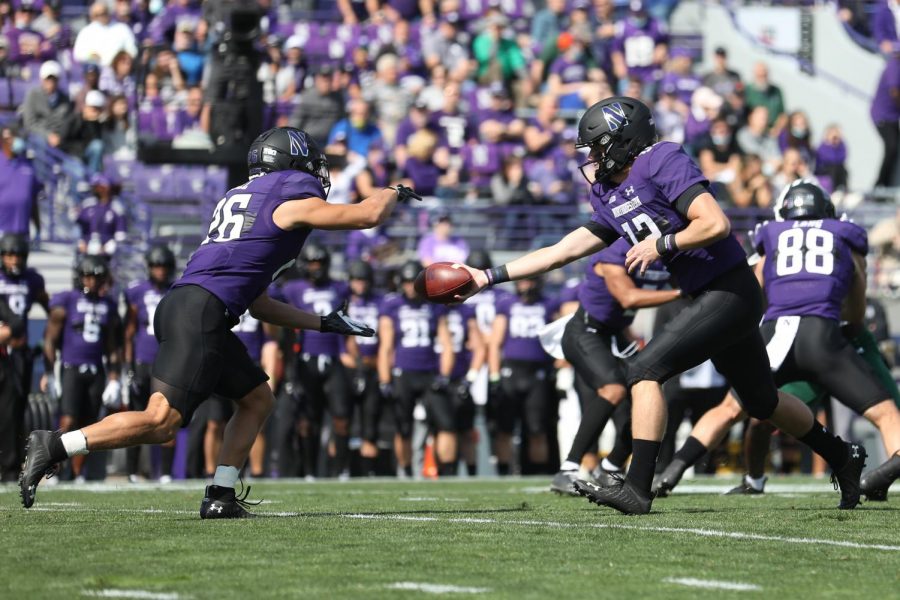 Ryan Hilinski hands the ball off to Evan Hull. The quarterback and running back combined for two touchdowns in Northwestern's 35-6 win over Ohio.

Sophomore running back Evan Hull led the way with 216 yards and two touchdowns, while sophomore quarterback Ryan Hilinski tossed 88 yards in his first career start for NU. The defense seemed on track for its first shutout since 2017, however quarterback Armani Rodgers sprinted into the end zone from 55 yards out on the last play of the game.

The Wildcats’ drive, and Hilinski’s first snaps as a starter, then lasted less than 90 seconds as NU punted after a three-and-out.

However, the offense got another chance after a fumble from quarterback Kurtis Rourke was recovered by sophomore safety Coco Azema. Hilinski quickly found graduate wide receiver Stephon Robinson Jr. for a 20-yard gain. The eight-play, 59-yard drive was capitalized by a 17-yard touchdown from sophomore running back Evan Hull.

Then, after a quick Ohio three-and-out, Hull put himself into the Cats record books. After receiving an inside handoff, he burst through the middle and raced down the right sideline for a 90-yard touchdown. The run was NU’s longest since Bill Swingle’s 95-yard touchdown against Boston College in 1961.

Another stop by the Cats garnered an efficient drive by Hilinski. The former South Carolina signal-caller found three wide receivers — Washington, graduate Stephon Robinson Jr and sophomore Bryce Kirtz — for a combined 39 yards and completed all six of his passes.

But NU was not able to cross the goal line in the red zone and a costly false-start penalty forced graduate kicker Charlie Kuhbander to come out for a 24-yard attempt. It ended up being his third miss of the season.

The next three possessions ended in punts before Hilinski, Hull and graduate running back Andrew Clair — who reeled off a 32-yard run — got the Cats back in the red zone. However, they could not find the goal line, resulting in Kuhbander returning for another 24-yard attempt, which he made. The kick gave Kuhbander the 40th made field goal of his career and NU a 17-0 lead heading into halftime.

No teams garnered any points early in the third quarter, as they combined for four punts. But the fifth drive of the quarter helped put the Cats firmly in the driver’s seat. A 31-yard rush by Hull helped the Cats reach the red zone once again. Eventually, Kuhbander nailed a 26-yard kick to put NU up 20-0.

On the next drive, Rourke’s pass was tipped by graduate defensive end Jeremy Meiser and picked off by All-American sophomore safety Brandon Joseph. However, Clair fumbled on the ensuing drive to give the ball back to Ohio.

After the Bobcats turned the ball over, the Cats ran six straight rushing plays that culminated in a seven-yard touchdown run from freshman running back Anthony Tyus III. Hilinski then handed the ball off to Robinson Jr. for a two-point conversion that gave NU a 28-0 lead. Senior safety Bryce Jackson added the secondary’s second pick late in the game and sophomore running back Jake Arthurs later contributed a six-yard touchdown run.

On the game’s final play, Rogers ran down the left sideline for the Bobcats’ only score of the day.

Hull, who rushed for 262 yards and two touchdowns heading into today’s game, struggled last week against Duke with only 10 carries for 49 yards. Today, he proved once again why coach Pat Fitzgerald made him the starter after Cam Porter went down with a season-ending injury. He found success on inside and outside runs and made moves to find space, epitomized on his 90-yard touchdown dash in the first quarter. Whenever Hull broke to the left or right side, Ohio often struggled to stop him in open space. Additionally, whenever NU needed a big play, Hull was there to provide it. His 17-yard scamper opened the game’s scoring and a 31-yard run in the third quarter set up the field goal that gave the Cats a 20-point lead. Again, Hull showcased why he is the lead back after rushing for 216 yards and two touchdowns — four shy of his career high of 220 set against Massachusetts in 2019. Against a Nebraska squad that allows 156.3 rushing yards per game, Hull has a chance to continue his dominant stretch of play.

2. Despite emphasis on the ground, Hilinski helps Wildcats win in first NU start

After seeing action at the end of last week’s game in Durham, Hilinski earned the starting nod this week over senior Hunter Johnson. Senior quarterback Andrew Marty was declared inactive before the game. Despite throwing for just 88 yards, Hilinski demonstrated an ability to complete passes on short and medium routes, as well as screens. The Cats’ three starting wide receivers were Hilinski’s primary targets. Additionally, he dropped back 20 times — completing 12 of his attempts — and did not attempt the deep ball often. Even though 373 of NU’s 461 yards came on the ground, Hilinski helped lead the Cats to a win with a mistake-free performance and completing passes to help move the chains. If the Cats decide to stick with him as the starter next week against the Cornhuskers, the game in Lincoln will be a good marker of whether Hilinski can build off his performance today.

3. The Cats’ secondary returns to its intercepting ways

Through the first four games of last season, Northwestern’s secondary racked up six interceptions. After this season’s first three games, the Cats were still looking for their first pick. Today, it arrived. Brandon Joseph — who tied for the most interceptions in college football last season with six — intercepted Rourke off a tipped ball from Meiser. Later in the fourth quarter, Jackson helped seal the game with the first interception of his career. With the Cats’ eight remaining games against Big Ten opponents, a strong performance from the secondary will be crucial for success against quarterbacks such as Iowa’s Spencer Petras and Wisconsin’s Graham Mertz.