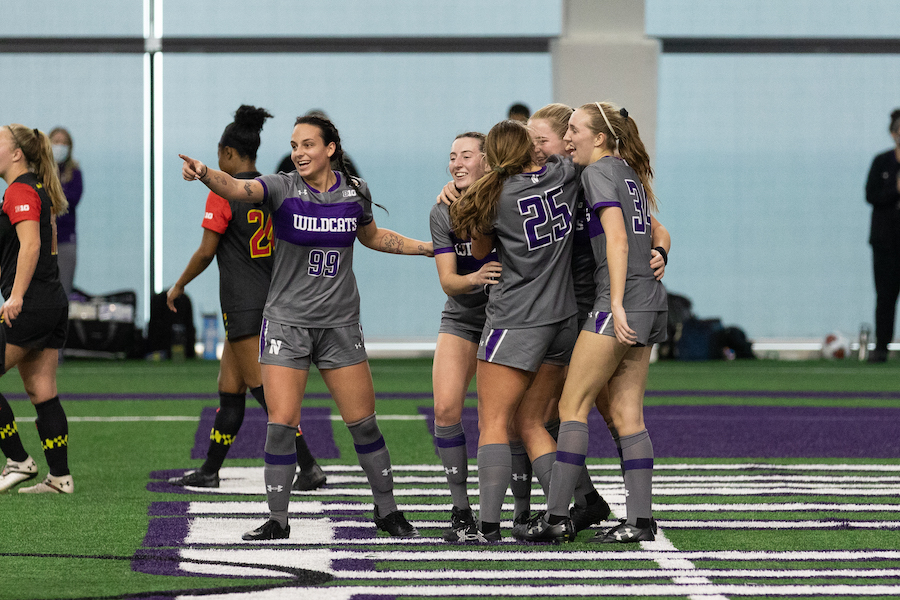 The Wildcats celebrate after a game in their spring season. The Cats scored a major victory against No. 12 Penn State on Thursday.

After falling short to Iowa Sunday, Northwestern bounced back.

“This is the first time the program has ever won at Penn State,” coach Michael Moynihan said. “They were ranked pretty high nationally so it feels pretty good.”

Following a quick turnaround from their 2020-21 campaign held in the spring, Moynihan said the Wildcats worked hard in the offseason to prepare for the tough conference schedule. He added the win over Penn State was “huge” for the team, setting the tone for the rest of the season.

With the majority of the starters from last season returning to the field, the squad played in sync the duration of the game, opening up shooting lanes on goal and creating fast break transitions down the field. This led to senior defender Kaylee Titus scoring a goal 11 minutes in, giving the group a 1-0 lead.

“The goal was so exciting and set the tone of the game,” Titus said. “It boosted the morale of the team.”

NU controlled possession for the majority of the game, despite being outshot 13-7 by the Nittany Lions. Titus attributed the Cats’ calm demeanor to their close bonds outside of the field, saying the midfielders contributed significantly to denying Penn State the ball in the center of the field. The defensive efforts paid off, with sophomore midfielder Josie Aulicino capitalizing with a goal in the 37th minute.

In her second season of collegiate soccer, Aulicino said the past few weeks of games have been surreal. She has held her own on the field, and getting the second goal for the team padded NU’s lead from the attacking Nittany Lions.

“It gave us a little bit of a cushion for some mistakes (in the game),” Aulicino said. “It was energetic, knowing we could score and we could get shots on a ranked team, which is really important to us.”

Even with the 2-0 lead, NU’s defense was tested heavily in the second half.

Penn State controlled the momentum, taking three corner kicks before defender Kerry Abello scored. With the Nittany Lions closing in on the Cats, Moynihan said the team needed to make some adjustments for the remainder of the game.

And it did, pressuring its opponents more on transition, defying its opponents the ability to tie the game and go into overtime. Moynihan added that the formation change on the field gave NU difficulty, but once it adjusted, it could have knocked down two more goals.

The Cats continue their road trip Sunday, battling the Maryland Terrapins in College Park, Maryland. Defeating the Terrapins 1-0 last season in Evanston, Moynihan said this game will be another tense one for the squad.

“Maryland’s been very competitive, playing other Big Ten opponents really close this year,” Moynihan said. “We struggled with Maryland on the road. It’s going to be a big game for us to just rebound and recover from (Penn State).”

Titus agreed, saying NU wants to work on its defensive stance in preparation for Maryland. With the Cats having established a strong offensive presence, she said tightening their defensive positioning late in the stretch to improve their game was necessary.

With a couple days of rest and travel before Sunday’s matchup, NU aims to bounce back fast to grab a win over the Terps for the second consecutive season.

“We’re going to celebrate our victories as they come,” Titus said. “But we’re going to prepare for (Maryland) and always be prepared for the next game.”