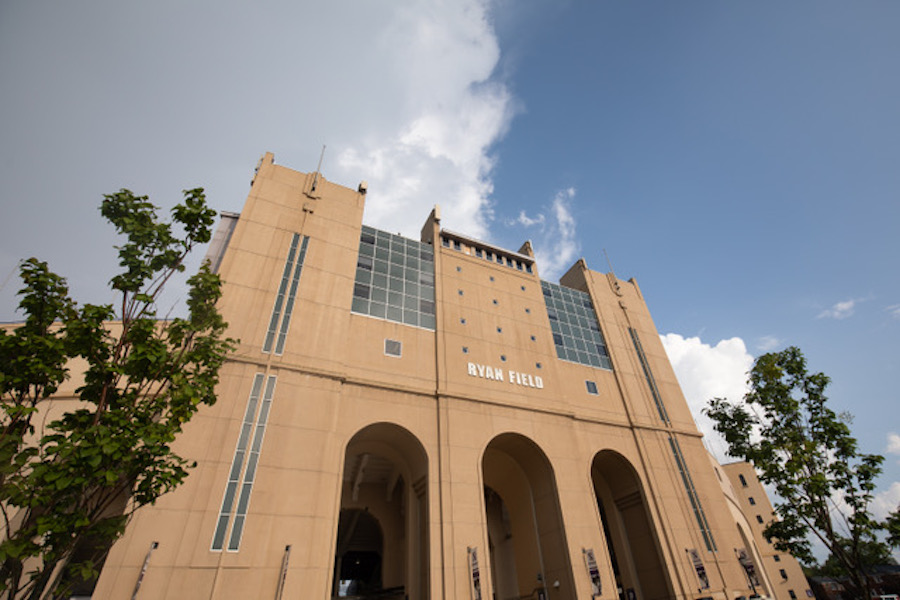 Ryan Field. Built in 1926, the home of Northwestern football will undergo a renovation as part of a $480 million donation from the Ryan family.

The Wildcats were coming off their best season since 1995, earning a second Big Ten West Championship in three seasons and winning their fourth-straight bowl game. Pat Fitzgerald, the winningest coach in program history, signed a 10-year contract extension in January.

But as NU marched steadfastly into the future, its stadium remained firmly in the past. Last renovated in 1997, Ryan Field boasts the lowest capacity in the Big Ten with a maximum crowd size of 47,130. Elements of its original construction in 1926 can still be found within the stadium’s walls today.

As he sat with University President Morton Schapiro in Ryan Fieldhouse in June, Gragg said he was ready to “jump into it with both feet” regarding a Ryan Field renovation.

The news finally became official this week. As part of a $480 million donation — the largest in University history — Pat and Shirley Ryan provided the lead gift to revitalize the stadium, which already bears the family’s name. While there is no timetable on the completion of the plans, Ryan Field’s renovation represents a necessity for a program looking to continue the momentum they have been building under Fitzgerald.

A former All-American linebacker at NU, Fitzgerald has spurned offers from the National Football League and larger college football programs to remain at his alma mater. Under contract until 2030, a renovated Ryan Field may be announced sometime during his tenure, especially since facilities like Welsh-Ryan Arena and Martin Stadium have been rebuilt over the last decade.

Announced amid the 2021 season — in which the Cats are 1-2 — the Ryan Field renovation is a logical next step in the program’s trajectory. It also provides another dose of reassurance that Fitzgerald is in it for the long run. In response to the renovation, he tweeted “We’re all in.”

Whenever the renovated venue at the corner of Ashland Avenue and Central Street is completed, there is no doubt it will be a top-notch football stadium. Look at Ryan Fieldhouse, the Walter Athletics Center and Welsh-Ryan Arena — they cost a combined $380 million.

The stadium will be a “world-class venue,” Gragg said in a news release. Key initiatives for the project will exceed Americans with Disabilities Act requirements, emphasizing environmental stability and making Ryan Field accessible to all attendees. The lack of fan amenities and other features of large stadiums in the Cats’ home venue are two additional reasons Ryan Field is being renovated, according to the project’s website.

Some games at Ryan Field, like the recent contest against Indiana State, haven’t come anywhere near full capacity. Meanwhile, certain contests against Big Ten programs, including Iowa and Ohio State, see thousands of opposing fans take up the stands in Evanston. And they make their presence felt.

These instances still may occur at a new Ryan Field. Yet it seems the venue will provide a gameday environment unique to NU supporters and increase the overall fan experience.

The Cats had the largest average home attendance increase in college football from 2017 to 2018 during their run to the 2018 Big Ten Championship Game, from 35,853 to 43,873. It‘s clear that a flourishing program on the field creates palpable excitement. Coupling on-field success with a new stadium may create one of the best home environments in program history.

Will Ryan Field become a place where conference opponents take home-field advantage into account? Only time will tell. But there is a chance the experiences Cats players feel when they take the field in Iowa City, Iowa or Lincoln, Neb. can be amplified at some level at home with a state-of-the-art venue.

It is still important to cherish the history of the 95-year-old stadium. The program’s highlights occurred on the grass (and turf) of Ryan Field, from the Cats defeating No. 2 Oklahoma in 1959 to beating Michigan in a 54-51 shootout in 2000. It was the place where players such as Otto Graham, Fitzgerald and Chris Hinton became purple-and-white legends.

And there is still time for the Cats to make more program-defining moments at Ryan Field’s current iteration. Numerous steps, from choosing an architect to listening sessions, have yet to commence and the project will take years to complete.

The new Ryan Field will not have the size of Michigan Stadium in Ann Arbor, Mich. or the traditions of Camp Randall Stadium in Madison, Wis. But the announcement of its revitalization is the latest piece of evidence that NU is a program on the rise.

Maybe the Cats will make some history there, too.