Football: How Northwestern wide receivers are preparing amid uncertainty at quarterback 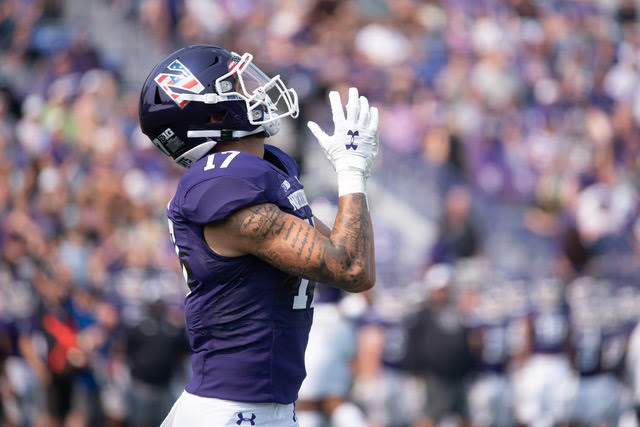 Bryce Kirtz readies to catch the ball. Kirtz is a member of a Northwestern receiving corps waiting for a starting quarterback to be announced for this weekend’s game against Ohio.

If coach Pat Fitzgerald knows who will be Northwestern’s starting quarterback on Saturday, he’s not saying.

The depth chart reads: senior Hunter Johnson or senior Andrew Marty or sophomore Ryan Hilinski. Fitzgerald named Marty the Offensive Player of the Week following his 141-yard, two-touchdown performance at Duke after he relieved Johnson at the end of the second quarter. But Marty suffered an upper body injury at the end of the game and was replaced by Hilinski, leaving his availability for Saturday unknown.

For the receiving core, the uncertainty of who’ll take the field under center may present a major stumbling block. But sophomore wide receiver Bryce Kirtz is taking the challenge in stride.

Kirtz caught three passes for 72 yards on Saturday. Against Michigan State, he caught seven passes for 80 yards from fellow Central Indiana native Johnson. He said the team runs the same package of pass plays no matter the quarterback. As a result, he is able to work with familiar material no matter who’s starting under center.

If there is any difference, Kirtz said Hilinski isn’t as much of a runner as Marty, who rushed for 111 yards against Illinois in 2019. Marty’s status may not be known until the release of the Inactive List minutes before kickoff.

“Marty brings a lot of energy to the field,” Kirtz said. “He has his own juice. We call him the Marty party. He gets things going really well.”

Kirtz wasn’t able to practice too many reps with Hilinski prior to him entering Saturday’s game, but added that the sophomore brings a “spark” to the field.

“I’m curious to see what (Hilinski will) bring to the table going forward,” Kirtz said.

Fellow wide receiver Stephon Robinson Jr., a Southern California native like Hilinski, played with him in football camps during their youth.

“​​The good thing here is, I know (Hilinski) from back home, so I’ve seen him play before,” Robinson Jr. said. “We just need to get on the same page as far as reps and stuff like that.”

Neither wideout mentioned Johnson in their remarks. Whether it means that Marty or Hilinski will start Saturday’s game or that Fitzgerald is giving the other two quarterbacks first-team reps this week in practice is unknown.

Fitzgerald emphasized the Cats’ need to cut down the turnover ratio in his Monday news conference. NU’s quarterbacks combined for three interceptions and two lost fumbles against the Blue Devils. Hilinski also threw what would have been a costly interception if not for a questionable pass interference penalty.

The first of Johnson’s interceptions against Duke was due to a miscommunication between him and Robinson Jr., who cut the opposite way of the throw at the end of his route.

“We’ve got to play cleaner football,” Fitzgerald said. “As I talked to the guys this morning, we can’t put ourselves in a hole against teams, you just can’t do that. We cannot turn the ball over at the rate that we’re turning the ball over and expect to be successful.”

Whoever the new quarterback is will be tasked with improving that communication and taking care of the ball. Robinson Jr. is optimistic that the player that will be under center will come through on Saturday.

“In my head, I just go out there and there’s one more rep,” Robinson Jr. said. “It doesn’t matter who’s throwing me the ball.”