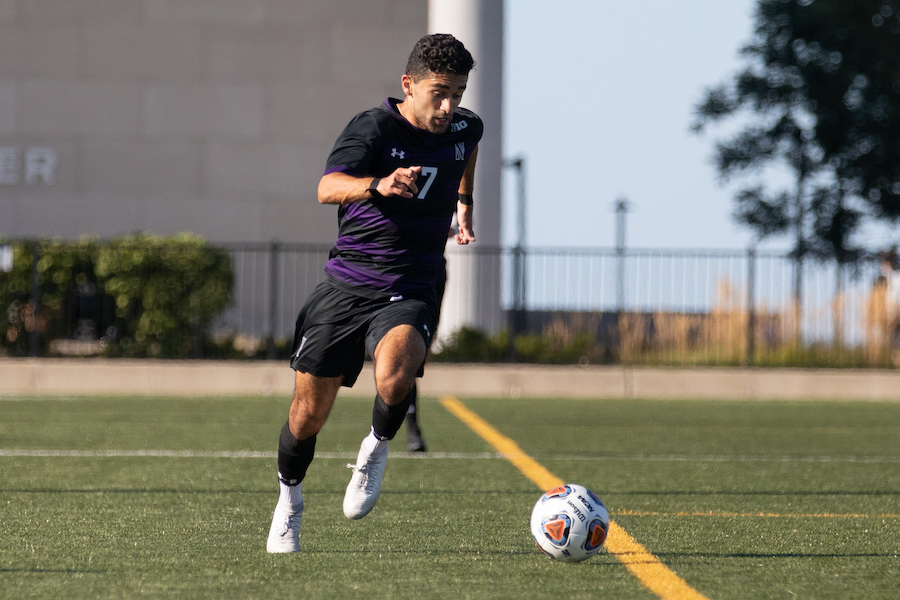 Senior midfielder Bardia Kimiavi runs upfield. The Cats have already matched last season’s win total, but are still at the bottom of the Big Ten standings.

Playing its first game against a ranked opponent this season, Northwestern couldn’t have asked for a better night game atmosphere: 1,100 fans packed the bleachers in attendance at home.

The Cats saw the back of the net first and early. Receiving a pass from forward Justin Weiss around the sixth minute, junior midfielder Vicente Castro finished the play with a goal, his first of the season.

Weiss, the Colgate transfer, picked up his team-high sixth point of the season. The sophomore’s season performance isn’t only limited to points. He also averages the fifth most shots per game in the Big Ten with 2.50.

NU’s lead held early into the second half until the Hoosiers connected on their fourth shot of the match from forward Samuel Sarver near the 47th minute. Following the score, the Cats’ backline couldn’t stop the bleeding. Just five minutes later, forward Ryan Wittenbrink sent a crosser into the six-yard box to Herbert Endeley, giving Indiana the lead and the final score, 2-1.

A major reason behind NU’s loss: the team’s penalties. Tying in saves and kicking one less shot on goal than the Hoosiers, the Cats collected 14 penalties to its opponent’s seven, giving Indiana nine more corner opportunities.

This is NU’s second straight loss after scoring first in the contest, and fifth straight game without a goal in the second period. A glaring recurring issue, the Cats rank second-to-last in the conference in goals this season.

Scoring two times in the last four games, NU now heads to Ann Arbor to face a Michigan team in a similar boat. Only two spots above the Cats in conference standings, the Wolverines have scored one more goal than NU this season. Michigan has also lost its last two contests.

NU and the Wolverines both look to get back on track entering the near halfway point of each group’s season. The road only gets tougher for the Cats with Rutgers and Maryland, the teams holding the two best records in the Big Ten, still left on the schedule. Michigan, on the other hand, has already faced both teams.

First-year coach Russell Payne and his group have matched last season’s win total, a mere two games. With nine games left in the regular season, including Michigan, the team will look to put a couple of these contests in the win column.