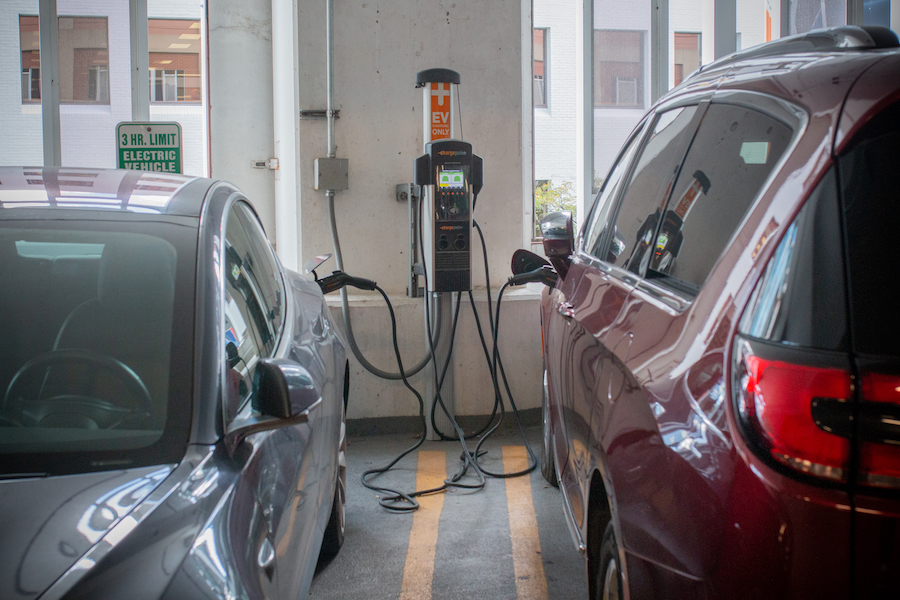 An electric charging station in Evanston. As electric cars continue to grow in popularity, the automotive industry in Evanston is changing.

Warren Fellingham started working at a gas station and automotive repair shop in 1988.

A few years later, he purchased the business for himself and renamed it Warren’s Auto Service. But after spending more than 30 years in the industry, he said times are changing — and so are energy sources.

“The sun’s setting on auto repair shops,” Fellingham said. “We probably have another 10 to 15 years.”

Fellingham said about three-quarters of his sales come from selling gas. The remaining sales come from repairing combustible engine cars, which he said generates the majority of his profit. To keep his business up to date, he installed environmentally-friendly gas tanks.

But as electric cars continue to grow in popularity, Fellingham said he knows the industry is transforming.

“The electric cars are here,” Fellingham said. “They’re awesome (and) amazingly fast, but I don’t know if there’s going to be a lot of opportunities to repair these things.”

The only maintenance electric cars need is changing tires, fixing brakes and doing bodywork, Fellingham said. These would not generate enough volume or sales to maintain Fellingham’s repair shop, he added.

Fellingham said he does not plan on installing electric charging stations at Warren’s Auto Service either, since charging stations can be installed anywhere. If gas station owners retrofit their stations with charging stations, he said they will need to provide another incentive, like an internet cafe or a restaurant. That way, the customer can hang out while their car is being charged.

Anthony Scala, owner of City Volkswagen of Evanston, is more optimistic about the future of gas stations. He said if he owned a gas station he would consider installing dual service pumps: one side of the pump would pump gas while the other would charge an electric car. This would give customers a choice while also generating revenue, he said.

Earlier this month, Gov. J.B. Pritzker signed into law energy legislation a goal for 1 million electric cars on Illinois roads by 2030. Even before this legislation, Evanston installed eight electric charging stations around the city that provide free electricity to electric vehicles. Six of these stations recorded nearly 4,000 charging sessions between 2016 and 2017, according to the city’s most recent data.

ChargePoint, Blink, SemaConnect and EVgo operate additional charging stations around Evanston. These stations are either free or charge money based on kilowatt hours.

Evanston resident Brad Turnbull recently purchased an electric car and said that owning one in the city is fantastic. He added that one of his favorite parts is how he doesn’t have to go to a gas station.

Turnbull said there will always be a market for gas cars and predicts that gas stations will be around for at least another two decades. But he also believes that gas stations should be searching for a proprietary way to fully charge electric cars in 10 minutes, which is about the time it takes to fill up a tank of gas.

“Companies like BP and Shell need to pivot their business models,” Turnbull said.

It’s hard to predict exactly what will happen to gas stations, auto-mechanics and other companies that service cars that require gasoline.

But Fellingham said he believes one thing is certain: change is coming.

“We’re going from a nation of shopkeepers to a nation of apps,” Fellingham said. “Maybe one day you can press a button on an app and someone will put air in your tires.”