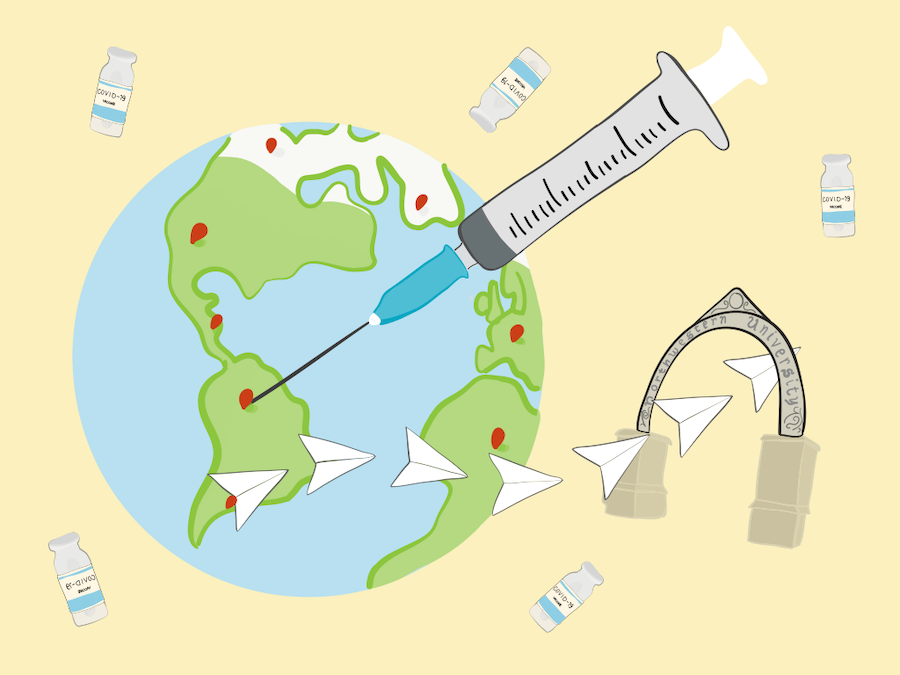 With travel restrictions, distance from family, and difficulties adapting, international students have a tough time getting started at Northwestern this year.

As in-person classes make their return, the Northwestern community is adjusting to some semblance of normalcy. But for international students, the transition back to campus is a little more complicated.

International students have had a particularly hard time over the past year and a half, with extreme time zone differences and travel restrictions creating logistical difficulties in engaging with their classes.

Medill junior Quan Pham, who was home in Vietnam since spring 2020, arrived in Evanston in August well before classes began. For Pham, making his way back to the U.S. was no easy task.

“International travel is still very difficult and limited,” Pham said. “We were concerned that if I hadn’t just flown early, if my flights were canceled, it would be very hard to find a new one.”

SESP sophomore Payson Zhang, who spent the summer interning in her home country of China, recalled similar experiences. Zhang said she had a difficult time making travel arrangements back to campus. And after her arrival, concerns linger about the logistics of her next trip home.

China’s mandatory quarantine policy makes it impossible for Zhang to go home for Winter Break, since she wouldn’t get out early enough to spend time with her family and return for the start of classes. Zhang doesn’t have any relatives to stay with in the U.S., so she’s not sure when she’ll be able to see her family again.

“Honestly, it was really sad for me, because when I left I knew that I probably wouldn’t be able to go back for at least a year or so,” Zhang said.

Zhang is not the only international student having difficulty dealing with the distance from home. When Weinberg sophomore Armaan Bhansali was heading to campus, he said only students were allowed to travel from India to the U.S., so he and the other Indian international students arrived without their parents.

Starting out in an entirely new place without a support system hasn’t been easy, especially for some freshmen, Bhansali said. He said he’s been making an effort to help smooth the transition to campus for some international freshmen.

“A lot of them were coming to the country for the first time. They’ve never been to Chicago or Northwestern,” Bhansali said. “They’ve come without their parents, and I had to go and help them buy stuff, and it was super scary for a lot of them.”

Weinberg freshman Shelly Rood said she’s also had a hard time adapting to life at NU. Rood, who is from the Dominican Republic, had never been to campus until move-in. Because of COVID-19, she was only able to take virtual tours and learn about the school through word of mouth.

Now that she’s here in the flesh, she said leaving her country behind and accepting her newfound independence has been daunting.

“I grew up there, I was born there, I lived there my entire life, I’ve never moved anywhere else,” Rood said. “So coming to Northwestern, having to not only take care of myself and be an adult but also get to know this entirely new area and town — it’s been a little difficult.”

— International students discuss attending college from around the world

— After spending over a year at home, some Northwestern students look toward an in-person fall