Football: After slow start to 2021 season, veterans of 2017 and 2018 turnaround campaigns preach focus to younger players 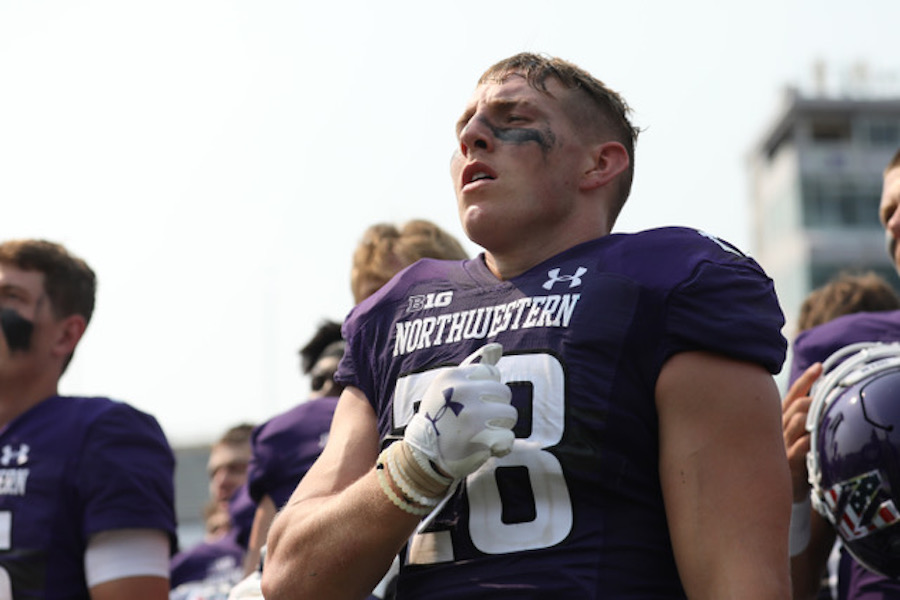 Chris Bergin sings the fight song after a game. The graduate student linebacker is among a few remnants of Northwestern’s 2017 and 2018 teams, both of which overcame slow starts to win bowl games.

The script for Northwestern’s 2021 season has unfolded in a familiar fashion.

The Wildcats have dropped a pair of early games. Analysts and fans alike have raised questions about the offense, defense, special teams and coaching staff. NU’s schedule has grown increasingly daunting, as several opponents have gotten off to hot starts.

Several current players have been in a similar situation before. A number of holdovers from the 2018 team, which started 1-3 before a late-season charge to the Big Ten West title, are members of this year’s squad. With COVID-19 altering traditional eligibility rules, some players also remain from the 2017 team that won its final eight games after opening 2-3.

One such veteran is graduate student kicker Charlie Kuhbander, an NU fixture since the beginning of the 2017 campaign. After missing two field goals in the opener against Michigan State, he made a recovery the following week, booting a 47-yarder against Indiana State and making five extra points in five tries.

“Something that both (2017 and 2018) had in common is we faced adversity early with injuries, where there were a lot of new and young guys playing,” Kuhbander said. “I think the biggest key (in 2021) is we gotta lead from within the locker room.”

Coincidentally, both the 2017 and 2018 Cats’ slow starts included losses to Duke — a trend that continued this year as well.

The 2017 team beat Nevada in its opener before getting blown out by the Blue Devils in Durham. After a 49-7 beatdown of Bowling Green, NU took back-to-back losses to No. 10 Wisconsin and No. 4 Penn State. The Cats then reeled off a winning streak that included a memorable triple-overtime win over No. 16 Michigan State, a Land of Lincoln Trophy blowout of Illinois, and a Music City Bowl victory over Kentucky.

NU took an even more unusual path in 2018. The Cats won a nationally televised opener at Purdue before dropping a pair of nonconference games, first against Duke, and then at home in a 39-34 shootout versus Akron. After frittering away a 17-0 lead against No. 14 Michigan in its fourth game, NU won all its remaining conference games. The Cats gave No. 6 Ohio State a scare in the Big Ten Championship Game and topped No. 20 Utah in the Holiday Bowl.

Graduate student linebacker Chris Bergin, who racked up eight tackles as a sophomore in that bowl game, urged the Cats’ younger players to “just stay the course” ahead of NU’s nonconference finale Saturday against Ohio.

“The message I’d give to the young guys is just to keep practicing, keep getting better, and every time you get a chance to go out there and play, come in with the mindset of wanting to learn and grow,” Bergin said. “That’s the only way you can get better.”

However, there’s one potential barrier to NU recreating its late-2010s turnaround magic. Where the Cats’ 2017 and 2018 schedules were relatively frontloaded, most of their 2021 tests are still to come. No. 5 Iowa, which owns two quality wins over Indiana and Iowa State, pays Evanston a visit on Nov. 6. No. 18 Wisconsin and No. 19 Michigan loom as potential road land mines, and even recent conference cellar dwellers such as Rutgers and Illinois have shown flashes.

Kuhbander believes strong upperclassman leadership will be essential to success against the Bobcats and beyond. Ohio is 0-3 and coming off a 49-14 loss to Louisiana-Lafayette, and was upset the week before by FCS Duquesne. After averaging 34.3 points per game in their three-game 2020 season, the Bobcats have mustered just 16.3 points per game so far in 2021.

Ohio’s offseason was headlined by the departure of Frank Solich, its winningest coach, who won four MAC East Division titles and coached 197 games in 16 years in Athens.

“We’ve had a good turnaround this week in practice, between meetings, on the field and in the locker room,” Kuhbander said. “Some of the older guys are really taking initiative, leading the team and bringing the younger guys along.”

Meanwhile, Bergin said the coaching staff is helping the Cats try and set a new tone for the 2021 season.

“We practice relentlessly and we continue to grow,” Bergin said. “That’s our edge. We look forward to getting better every week, and that’s how we’re gonna turn this thing around.”