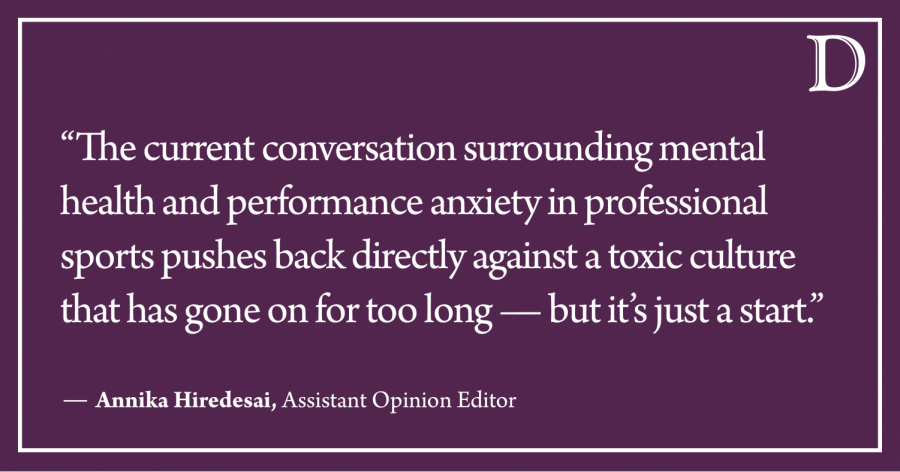 “Pressure is a privilege.” These words hang at the end of the walk from the locker room onto the largest stage in the tennis world. The past few weeks, two young teenagers captivated tennis fans with their charisma and poise as they took the U.S. Open in New York by storm.

The last women’s major final between two teens was over two decades ago. Earlier this month, the United Kingdom’s Emma Raducanu faced off against Canada’s Leylah Fernandez, who are 18 and 19 years old respectively. The teen sensations captured the hearts of the New York crowd and television audience with their jubilant tennis and infectious smiles.

I was inspired to see two women of color, born in the same year as me, playing on one of the grandest stages in tennis. Every momentum shift in the nearly two-hour-long contest had the audience on their feet. Raducanu’s aggressive returns and inside-out backhand were lethally precise. Fernandez’s gritty style of play was a testament to her mentality as she ran ball after ball down with an ever-present grin on her face. When Raducanu sealed the deal with a pattern-switch ace out wide, she made history as the first qualifier to win a grand slam. Even my father, who witnessed the rise of Rafael Nadal and Roger Federer when they were teenagers, remarked that this surreal final was a once-in-a-lifetime moment.

Earlier this summer, Raducanu pulled out of her fourth round match at Wimbledon. It was clear to anyone watching the match that Raducanu had immense difficulty breathing and was in distress. After calling for the medical team, she was urged not to return to play although the details of what had occurred wouldn’t be clear until some time after her match. Commentators and news personalities like John McEnroe and Piers Morgan made baseless claims about the “pressure being too much,” often with misogynistic underpinnings.

The very reason fans adore Fernandez and Raducanu is their free-swinging, energetic tennis. With the pressures to come, how long will this last? Throughout the tournament, commentator and tennis legend Chris Evert remarked during the match that she hoped both players had strong support systems in their families and teams. Is that enough? We live in a world where public figures face unprecedented scrutiny and harassment. Raducanu has already experienced this backlash when she retired from Wimbledon.

This isn’t the first time this sort of rhetoric has been directed at female athletes. Simone Biles’ withdrawal from Olympic competitions ruffled feathers. Biles was accused of cowardice and being unpatriotic. Naomi Osaka pulled out of the French Open this summer after being fined for not fulfilling her media obligations, citing mental health concerns. While many athletes came to her support, there were still those who denounced her for cracking under the pressure and causing unnecessary drama.

Pressure is a privilege, no doubt. Anyone who has ever been afforded an opportunity to realize a dream knows the overwhelming nature of such a gift. Yet, too often, athletes are expected to take every chance that comes their way, to shut up and just play. It’s dehumanizing.

The current conversation surrounding mental health and performance anxiety in professional sports pushes back directly against a toxic culture that has gone on for too long — but it’s just a start. Tournaments and player associations should work to improve conditions for athletes facing mental health difficulties. The elite athletes of the sport often work with sports psychologists, but the average professional athlete can’t afford to add one to their team. Providing general counseling resources at events for athletes would be one great next step to take.

The next generation of tennis players and all other athletes deserves better. They deserve the space to grow as both athletes and people, on their own terms. They are the breath of fresh air that tennis needs, a reminder of just how much we love the sport — and it’s cruel to trample that spirit.

Annika Hiredesai is a Weinburg junior. She can be contacted at [email protected]. If you would like to respond publicly to this op-ed, send a Letter to the Editor to [email protected]. The views expressed in this piece do not necessarily reflect the views of all staff members of The Daily Northwestern.