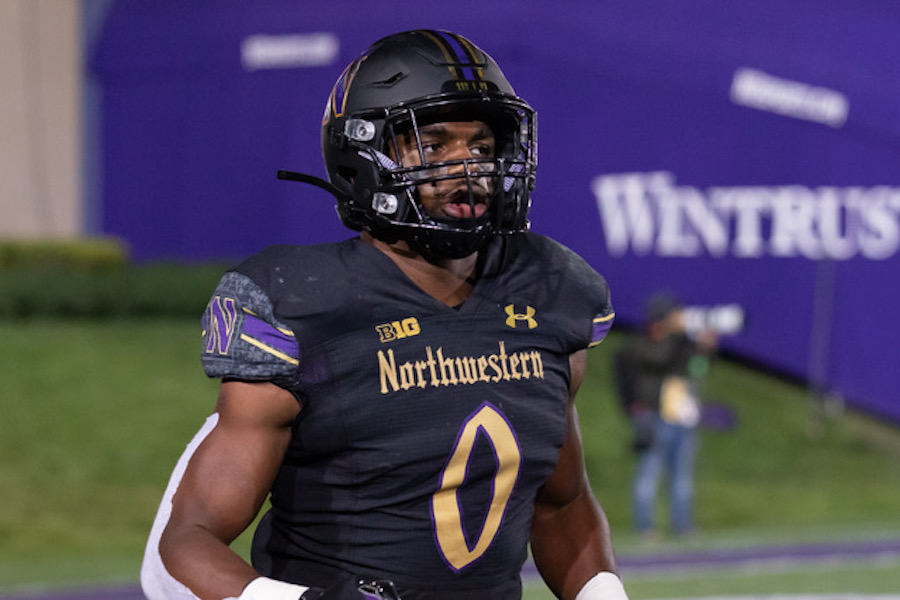 The Northwestern Wildcats host the Michigan State Spartans at Ryan Field in Evanston, Illinois on September 3, 2021.

In 2020, the unit led the nation in defensive pass efficiency (95.27) and recorded 11 of the Wildcats’ 14 picks. Cornerback Greg Newsome II led the Big Ten in passes defended and safety JR Pace earned All-Big Ten honors. Now, both players are gone.

This year’s performance, so far, looks different. Joseph has zero takeaways, and neither do any of the Cats’ defensive backs.

“Picks don’t start on Saturday,” sophomore safety Coco Azema said. “It starts when bringing that mindset into practice and just keep on redoing it over and over and over. It also starts with film. You see a route, you see it over and over, on game day you get to jump it and get that pick.”

The group has been able to create turnovers thus far in hopes of returning to its shutdown ways. Despite the secondary’s efforts, they are not interceptions. Heard II recorded two fumble recoveries against Duke to earn him Team Defensive Player of the Week, while Hampton Jr. forced a fumble versus Michigan State.

Meanwhile, the Cats’ only interception of the season belongs to graduate linebacker Chris Bergin.

The secondary struggled early on against the Blue Devils, giving up 257 passing yards in the first half. However, the Sky Team locked in for the final 30 minutes, limiting Duke’s offense to 93 yards through the air and helping NU spark a late comeback attempt.

The tale of two halves sums up the Cats’ performance against opposing quarterbacks. While looking good at times, NU has given up the fourth-most passing yards in the Big Ten. Now entering the fourth week of the season, the secondary is still looking to solidify its identity.

“When I showed up, (Pace) and (Newsome II) were saying, ‘We are the best DBs in the nation,’ and then we would go out and perform the way that we would perform,” Joseph said at Big Ten Media Days in July. “I don’t want to lose that. I was a part of something that was great and I want to continue to do that every single year and every single time we go out in the field.”

This Saturday against Ohio, NU will face an offense led by quarterback Kurtis Rourke, who has only one interception this year. However, the team has struggled to thrive in the pass game, averaging 172.7 yards per contest. On the flipside, the Cats have allowed 224.3 passing yards per game.

With a winless Bobcats team up next, NU’s defensive backs have the opportunity to lock in and put together a strong performance. Maybe they will snag their first interception of the season.

“Everyone’s hungry,” Azema said. “Everyone wants to fight to get that chance to play on the field, so I feel like that’s our group identity.”