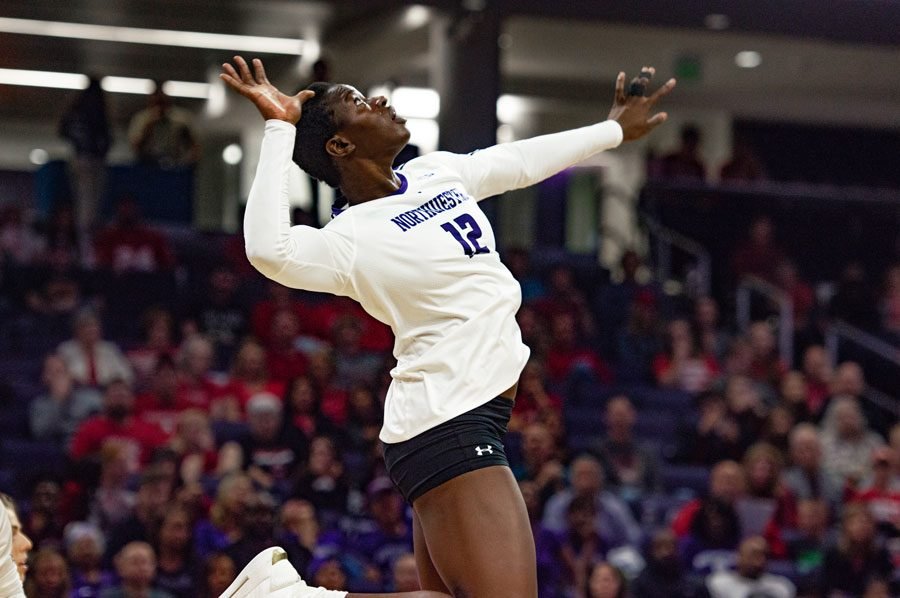 Junior Temi Thomas Ailara sets up for a kill. Thomas-Ailara led offensive scoring this weekend and has continued her brilliant play into this fall.

As Northwestern students flock back to campus from across the globe, Wildcat sports are in full swing, preparing for fans to return to the stands.

Some teams have seen success, while upsets have plagued others, foreshadowing the upcoming challenges of the Big Ten season. Field hockey aims to secure an NCAA championship, and volleyball and cross country opened their season with impressive finishes. Meanwhile, women’s soccer suffered a nail-biting loss.

We updated you last week on the start to NU’s fall sports season — here’s everything that’s happened since.

No. 4 Field Hockey continued its hot streak with a 5-1 win over California

Field hockey (8-1, 0-0 Big Ten) solidified its No. 4 NFHCA preseason ranking with a dominant win on the road in Berkeley, California, giving the squad a five-game win streak early in the season.

Outshooting Cal 16-3, the group highlighted its offensive versatility with five different players scoring goals during the game, including sophomore midfielder Maddie Zimmer. The 2020 Big Ten Freshman of the Year had a stellar fastbreak goal during the third quarter, edging the Cats closer to victory.

With just one goal allowed, the defensive zone once again held up against the opposition. Sophomore goalkeeper Annabel Skubisz secured her sixth win of the season, posting two shots the entire game.

The Cats have just one loss after this weekend’s games, but their biggest challenge yet awaits with a Friday match against Rutgers, marking their Big Ten Conference season opener. A win over the No. 10 Scarlet Knights offers NU the potential to send a resounding message across the conference.

Volleyball concluded the weekend with a successful 2-1 record at the Chicago Cup at Welsh-Ryan Arena, earning a shutout win over Loyola and a 3-1 victory over Illinois-Chicago. Despite a 2-3 loss to DePaul, Northwestern junior Temi Thomas Ailara led offensive scoring with 20 kills in the match. Redshirt junior Hanna Lesiak led the group’s defensive zone, recording 15 digs alongside 12 kills over the Blue Demons.

After taking two of three this past weekend, the squad is set for a stint of home games in the coming weeks before it hits the road to face Maryland and Penn State.

NU will enter its tough slate this year with valuable momentum, starting with its conference home opener match against No. 12 Nebraska on Wednesday. With the loss of many starters from the 2020-21 campaign, the Cats’ solid performance at the Chicago Cup shows promising signs for the remainder of the season.

Cross country its their early-season success at the Redbird Invite with a second-place finish. The race was the Cats’ first 6K race of the season, and the squad’s dominant performance showcases the progress under coach Jill Miller in her third year at the helm.

The Cats placed all scoring runners within the top 22 spots, a marked improvement compared to their 2019 performance at the invitational, where they finished fifth with one runner placing in the top 22. Senior Rachel McCardell captured an individual victory with a PR time of 20:20 while junior Kalea Bartolotto secured a third-place finish with a PR of 20:50.

NU seeks to build upon their success next week at the Joe Piane Invitational in South Bend, Indiana.

Women’s soccer fell short in a 2-1 loss to Iowa on the road Sunday, despite grabbing an early lead in the second half courtesy of sophomore midfielder Ingrid Falls’ goal with less than 30 minutes in the game.

However, the Hawkeyes quickly responded with two goals of their own to take over the lead. Although NU outshot Iowa 8-7 on goal, they couldn’t connect in the last minutes to tie up the score.

The tough road loss drops the Cats to a .500 record, similar to their 2020-21 campaign. With an upcoming away match against Penn State, NU — currently ranked 12th in the conference for goals allowed — needs to hold a tighter presence on the defensive end to place themselves back in the win column.