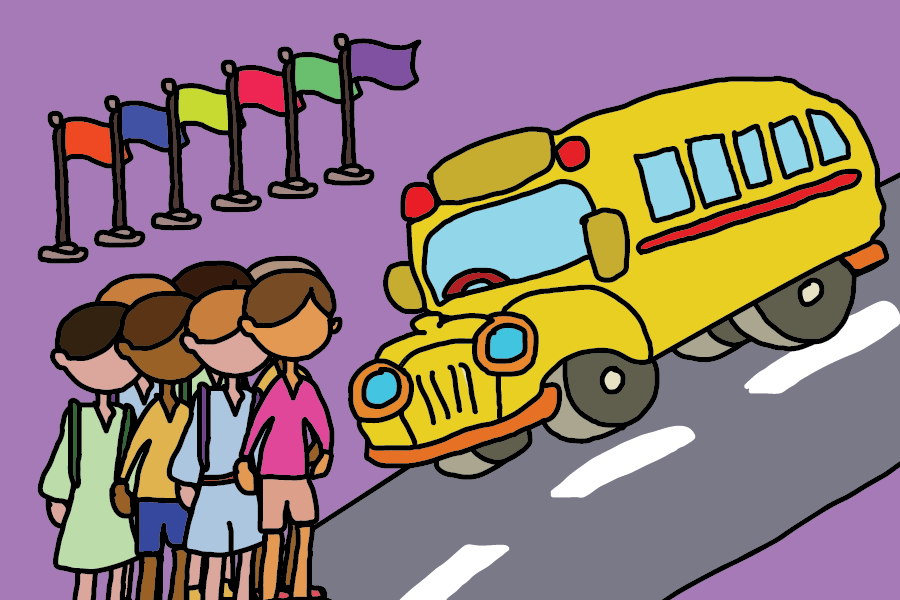 From hoards of unmasked students to a bus reversing on the highway, there were several things wrong with the class of 2024's Six Flags trip.

The annual Six Flags Great America trip, an event that was part of freshmen and sophomore orientation programming, left many upset about the chaotic crowds, unsafe driving and lack of planning Sunday night.

While the trip is typically exclusively for freshmen, the class of 2024 and transfers were invited to join as part of Wildcat Welcome Back, a version of orientation for sophomores including several traditional activities the class was unable to participate in last year.

Weinberg sophomore Yasmeen Mohammed Rafee, the last student to board a bus, said some students felt they were in unsafe situations throughout the night. She added that it was an overall “demoralizing” experience and she felt it could have been avoided with better planning.

“It felt like (NU administrators) had dangled the carrot (of Six Flags) in front of us for a year, and when the actual process came, they hadn’t put in adequate preparation to make it a safe and fun experience,” Mohammed Rafee said.

SESP sophomore Spencer Cook said the chaos began at boarding. Students were told they would board buses from 8:30 to 9:30 p.m. to leave for the park, he said. But some students waited for over two hours to board a bus. Others gave up and left.

There were no instructions on how to line up and the crowd was hostile, Cook said, with hordes of students crammed together, pushing one another in an attempt to board.

“I felt like in order to get on a bus you had to just ditch your friends and shove,” Cook said. “Nobody wants to do that on a night when you’re supposed to be with your friends.”

Several students, including Mohammed Rafee and Cook, said they were highly concerned about the lack of COVID-19 safety measures — most students were unmasked and clustered together, they said.

Weinberg sophomore Rebekah Soliman said several students removed themselves from the crowd — consequently losing their place in line — because they felt overwhelmed. The night was hot and humid, she said, and students had been instructed not to bring food and water.

“There were people having to sit on the ground because they were afraid they were going to pass out from dehydration,” Soliman said. “It was troubling to see that.”

Once on the bus, Cook said problems continued to unfold. He said the driver of the bus he was on started driving in the opposite direction of Six Flags until students on board pulled up maps on their phones and pointed out the incorrect directions.

The driver also missed the freeway exit twice. The first time, he took a later exit and re-entered the freeway. After missing it again, Cook said he put the vehicle in reverse on the busy interstate and attempted to drive backwards until the exit. When he was unable to reach the exit by reversing, Cook said the driver pulled off and cut through grass to make the exit.

Cook’s driver was also hitting curbs and running stop signs during the drive, and missed the entrance to Six Flags. Cook was on the bus for an hour and a half for what should have been a 40-minute drive. Soliman and Weinberg junior Conner Goodwin, who were both on the same bus as Cook, echoed what Cook described.

“To go from being unsafe in the lines to being unsafe on the roads — (it was) the worst four hours I’ve ever spent on campus,” Cook said.

Cook and his friends skipped the Wildcat Welcome Back events the following day, saying they didn’t have the “mental energy” for them and were afraid of more disorganization.

Cook’s bus wasn’t the only one to get lost. Weinberg junior and Peer Adviser Jason Hegelmeyer said the bus he boarded got lost on the way back to campus, and ended up dropping some students off north of campus around 2 a.m.

Weinberg sophomore Jhil Patel also said students were behaving “obnoxiously” throughout the night. When boarding buses to return to campus, the crowd got out of control, she said.

“Everyone was running toward the bus, and I tripped a few times and fell,” Patel said. “It was a stampede of people dying to get back.”

Weinberg sophomore Haylee Lanfranco said she felt the lack of planning put into the sophomores’ Six Flags experience made her feel as though the University didn’t truly care about the class.

As a Family Ambassador, she’s been involved with both Wildcat Welcome programming for freshmen and Wildcat Welcome Back activities for sophomores. She said she feels the former has consistently been much more organized.

“I feel like (sophomores) are overlooked in this whole orientation process, even though a lot of us are being oriented to campus for the first time,” Lanfranco said.

McCormick sophomore Jayden McCarrell also expressed frustration at the lack of planning, adding that administrators had sent out a survey far in advance to gauge how many students were attending the event, so they should have been able to plan.

However, he also noted that students were being disrespectful and uncooperative throughout the night, exacerbating the problem.

“It was a hot mess,” McCarrell said.

— Cook County Health to give 15,000 Six Flags tickets to those vaccinated Wednesday