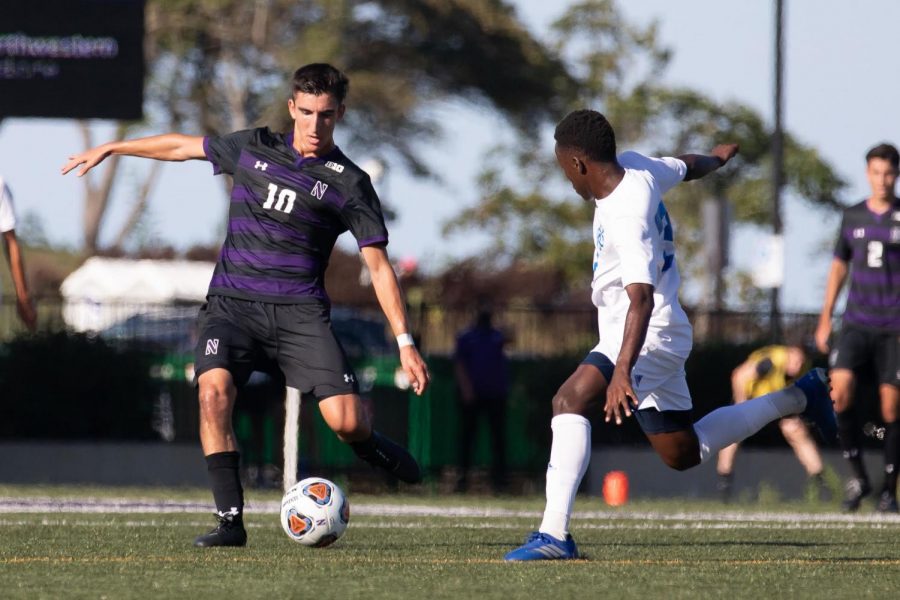 Junior midfielder Vicente Castro prepares to kick against Kansas City on Sept. 6. The Wildcats are 2-2-2 so far, with the rigors of Big Ten competition looming.

Goals, wins and challenges for the Wildcats abound. Field hockey comes off an Elite Eight finish, volleyball and men’s soccer push for a rebound season, and cross country and women’s soccer look to put together a strong season after returning key veterans on both rosters.

Here’s what you need to know before jumping into the upcoming season.

Northwestern field hockey’s NCAA Elite Eight appearance last year and No. 4 ranking in the preseason NFHCA Coaches poll, the highest preseason ranking in school program history, suggested that another top finish was brewing for the Cats.

Flash forward, and it still looks like the team can make a championship run a reality.

The group raced out to a strong 6-1 start with all impressive victories, each win coming against a top-25 ranked opponent.

Filled with ample playmakers, the team presents many names to look out for, including Big Ten goal leader redshirt junior forward Bente Baekers. After a season filled with Big Ten honors and an NFHCA All-American selection, Baekers has already returned to top performance form, securing a conference offensive player of the week award.

Another Wildcat playing at a high level with Baekers is graduate transfer Clara Roth, with the seventh most assists in the Big Ten.

NU will prepare for its upcoming contests with UC Davis and California to wrap up its out-of-conference schedule, outside of Ball State on Oct. 10, before the team takes on Big Ten competition starting Sept. 24.

Although near the bottom of the Big Ten record-wise, the Cats have momentum on their side entering conference game play. NU holds a three-game win streak after its 1-0 victory over DePaul, and the good news doesn’t stop there.

Sophomore midfielder Josie Aulicino is having a breakout season, ranking third in points per match in the Big Ten and tied for first in assists in the conference. Along with Aulicino’s success is senior goalkeeper Mackenzie Wood, who holds the fifth most saves per game in the conference.

The Cats’ record stands above .500, for now. But if the team wants to increase its chances of securing a Big Ten championship, a strong cushion in the win column would go a long way. Eight of the 14 teams in the conference have one or fewer losses on the season, excluding ties, compared to NU. With out-of-conference play over, the real season has officially started.

With longtime coach Tim Lenahan’s retirement after the 2021 spring season, new coach Russell Payne inherits a team looking to bounce back from its 2-8-1 record last year.

Lenahan exited as the winningest men’s soccer coach in school history with 15 NCAA tournament appearances over his 20 year tenure. His replacement, Payne, enters with some big wins as well. Before becoming the Army’s head coach, he won a National Championship with Maryland as assistant coach in 2005.

NU currently sits at 2-2-2, each loss determined by one goal, and has one game left before facing off against Big Ten opponents. Alongside the Cats’ .500 record, both the offense and defense have shown potential — NU is tied for the fifth-most goals in the conference and the second-most saves.

With tough competition in Big Ten opponents like Indiana and Maryland, two programs ranked in the top 25 nationally, the road will not be easy for the Wildcats. That said, NU’s start so far,  which has them ranked sixth in the conference, suggests improvement from last year’s finish.

In one of the toughest conferences in college volleyball, Northwestern began its season with a 3-5 record after a 2020-21 campaign filled with postponed matches.

The Cats lost multiple key contributors after the 2021 season, but returned some important pieces. Headlining these returners is junior outside hitter Temi Thomas-Ailara, a First Team All-Big Ten player last year, who currently ranks in the top 10 in kills and top three in service aces in the Big Ten.

Following this weekend’s Chicago Cup, the group will begin a grueling slate of Big Ten games, consistently facing difficult competition. The Big Ten holds six teams in the top 25 nationally, three of them being in the top six, and the Cats will need to find their rhythm early to keep up. Although NU has its work cut out, the opportunity to finish over .500 is still a possibility.

Cross country returns to its regular spot on the fall sports calendar for the first time since 2019, and early returns have the Cats off to a hot start.

In its first invitational of the season, the team secured a second-place finish in an 11-team field at the Hawkeye Invitational. Alongside coach Jill Miller, the team is led by its top two runners last season in senior Rachel McCardell and junior Kalea Bartolotto. The duo earned first and eighth, respectively, in the first contest.

NU was not one of the seven Big Ten schools named in the NCAA National Coaches’ Poll entering the season, but the dominant victory in its first contest shows promise. With the strong leadership by McCardell, Bartolotto and others, the team could quickly turn heads in its next three meets before the conference championship.