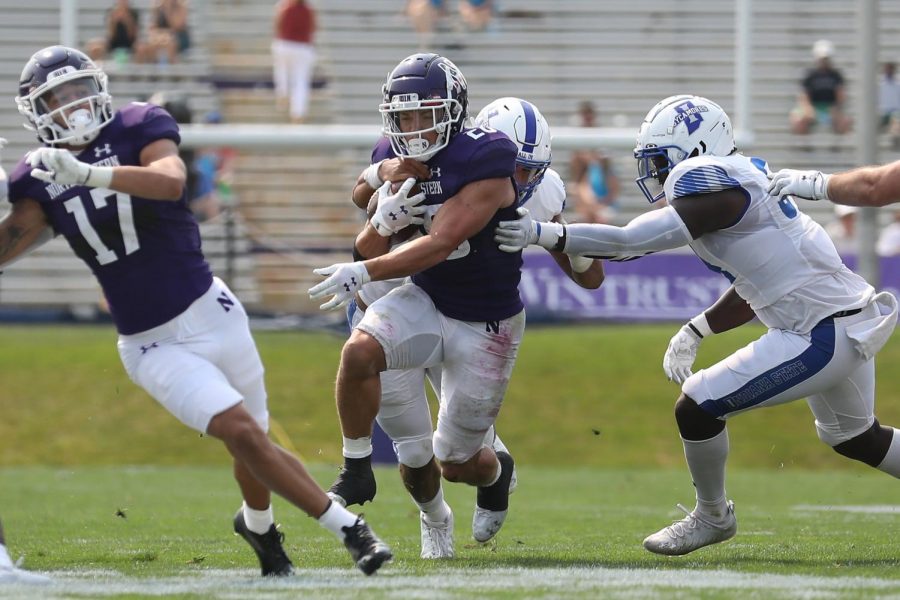 Evan Hull runs the football. The sophomore running back racked up 126 yards and 2 touchdowns in Northwestern’s 24-6 win.

Northwestern opened the non-conference portion of its 2021 campaign Saturday against Indiana State, in search of its first win of the season and a measure of redemption after an underwhelming opening loss to Michigan State.

Arrayed in purple helmets with red, white and blue lettering on the 20th anniversary of the September 11, 2001 terrorist attacks, the Wildcats (1-1, 0-1 Big Ten) put on a defensive clinic, overcoming long stretches of offensive listlessness to down the Sycamores 24-6 (1-1) in Evanston.

Senior quarterback Hunter Johnson was largely ineffective, completing nine of his 16 pass attempts for 66 yards. Picking him up was sophomore running back Evan Hull, who rushed for 126 yards and two touchdowns on 22 carries.

NU struck quickly out of the gate, driving 75 yards on 11 plays to Hull’s three-yard touchdown run. The Cats passed just once, leaning on three runs of 10 or more yards — two from Hull and one from graduate student Andrew Clair. The Sycamores responded with a promising drive that ended in a punt after junior defensive end Adetomiwa Adebawore forced a fumble.

Power running once again paced NU on its next drive, with freshman Anthony Tyus III churning out 31 yards. Johnson found junior wide receiver Malik Washington on a misdirection play for a 25-yard touchdown to put the Cats ahead 14-0, a score that held up to the end of a quick first quarter.

Indiana State once again threatened early in the second, but NU’s defense slammed the door and forced another punt. The Sycamores replied with a stop of their own but bungled the ensuing punt, giving the Cats possession on the Indiana State 32. Hull fumbled shortly thereafter, giving the Sycamores new life.

NU’s defense held serve after a holding penalty, and Indiana State was forced to punt yet again. The Sycamores turned up the heat on Johnson, forcing him to scramble on the drive’s first play and eventually sacking him on third-and-three. The teams swapped three more possessions before hitting halftime with the Cats still holding a 14-0 advantage.

Another Indiana State drive petered out early to start the second half, and Travis Reiner’s punt to sophomore Brandon Joseph was returned 46 yards to the Sycamores’ 27. NU couldn’t get anything going, but graduate student Charlie Kuhbander booted a 47-yard field goal to stretch the Cats’ lead to 17-0.

When Indiana State punted again, Joseph outdid his earlier return, ripping off a 65-yard gain that landed NU on the Sycamores’ 18. The Cats blunted Joseph’s long run with a mishandled snap and penalty, and wound up in the odd position of going for it on fourth-and-23. Johnson’s pass was incomplete, and NU turned the ball over on downs.

A terrific Indiana State punt placed the Cats in the shadow of their own end zone, and NU’s offense continued to frustrate as Johnson threw an interception to end the third quarter. An Adebawore hurry hastened another Sycamores punt, which junior wide receiver Raymond Niro III briefly muffed but ultimately returned for 28 yards. Once again, the Cats couldn’t make a drive stick and punted.

After forcing yet another Indiana State punt, NU finally broke through, as Hull took a handoff 13 yards to the house. The Sycamores responded with their only score of the day, a nine-yard pass from quarterback Anthony Thompson to tight end Zach Larkin.

NU, despite success in the passing game against the Spartans, turned back the clock against Indiana State. The Cats ladled out a variety of runs against Indiana State on their opening drive. Hull ripped off gains of 12, 18 and eight yards on NU’s first three plays from scrimmage, with he, Tyus III, Johnson and Clair all carrying the ball in a six-play span. The 105 yards Hull amassed on 15 first-half carries stood in stark contrast to his 18 all-purpose yards on two first-half touches against Michigan State. This robust rushing attack helped the Cats flourish on offense at times despite an off-day from Johnson.

The Cats were thrown into neutral in the second quarter, during which they gained only 36 yards. NU maintained its two-touchdown lead, however, because sharp defensive play ensured the Sycamores only gained 37. With Indiana State facing third-and-11 on the Cats’ 38 early in the second, Thompson completed a pass to wide receiver Rontrez Morgan — who was immediately halted for no gain by sophomore Cameron Mitchell. Adebawore added a key hurry on Indiana State’s penultimate drive, and NU’s early gains held up into the intermission.

A safety by trade, Joseph had returned neither a kick nor a punt in his Cats career before Saturday afternoon. That changed in a hurry when sophomore defensive back and return man Coco Azema was declared inactive pregame. Joseph took a third-quarter punt and raced 46 yards, and then flashed his speed again in the same period with a 65-yard gallop — NU’s longest, per Big Ten Network, since 2012. It remains to be seen whether Joseph will carve out a full-time role on special teams, but his audition showcased the versatility that makes NFL scouts salivate. Niro III also showed off his ability on special teams, racking up 55 yards on two punt returns.