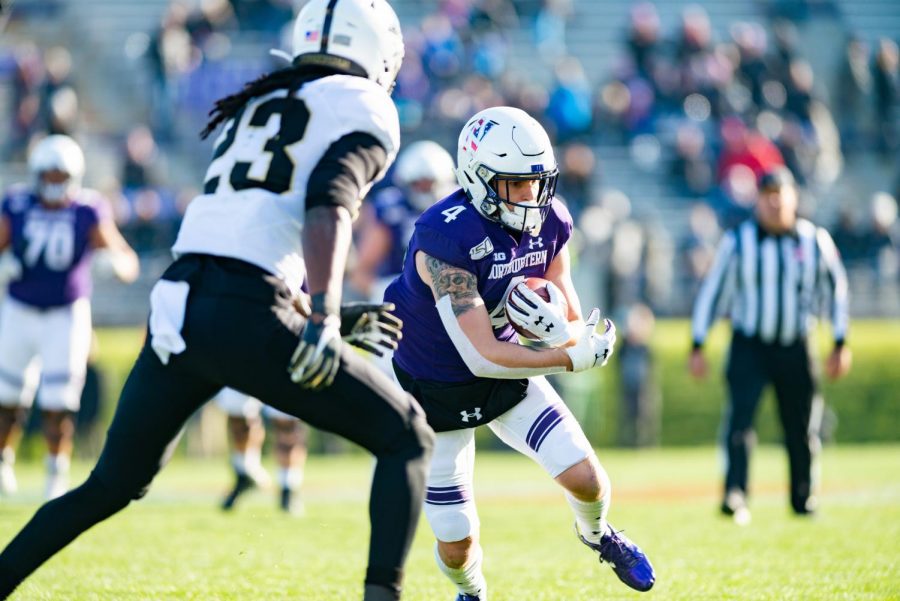 During the 2019 campaign, he caught 45 passes for 727 yards and eight touchdowns. Just a year removed from that season, Robinson Jr. was looking for a change following his injury-plagued senior season with the Jayhawks.

So he reached out to Northwestern.

After speaking with Robinson Jr. and watching his game film, wide receivers coach Dennis Springer thought he would be a good fit for the Wildcats. More importantly, the Los Angeles native believed in NU’s coaching staff.

“I felt like they were genuine with everything,” Robinson Jr. said. “It seemed like they wanted to give me the opportunity to do great things. That’s what made me come here.”

Against Michigan State, Robinson Jr. will take the field as one of the Cats’ starting wide receivers alongside senior Berkeley Holman and sophomore Bryce Kirtz. The trio leads a retooled wideout room impacted by departures, but filled with potential and optimism.

Before McGowan transferred to Georgia Tech and Chiaokhiao-Bowman and Lees declared for the 2021 NFL Draft, Kirtz often stayed after practice to work on route running, leverage techniques and releases with his veteran teammates.

Following their departure, he took it upon himself to prepare for a larger role in the offense.

“I’ve gotten bigger in the weight room,” Kirtz told The Daily. “I know the playbook a lot better than I did last year. (I’m) just being more confident, knowing I can be out there and play with these guys.”

The Indiana native finished the 2020 season as the Cats’ fifth-leading receiver with six catches for 67 yards. Meanwhile, Holman reeled in two passes for 27 yards before missing the rest of the year after taking a hard hit against the Spartans.

While NU may be younger and less experienced at the position, coach Pat Fitzgerald praised the group’s explosiveness and athleticism. Kirtz said the starting wideouts bring speed to the offense and can all take handoffs in the backfield, making it hard for defenses to track them.

According to Kirtz, his main asset is speed. By stretching defenses out on crossing and go routes, he looks to be a top target of senior quarterback Hunter Johnson — his teammate at Brownsburg High School. Meanwhile, Robinson Jr. envisions himself as a big-play receiver, going up to grab passes whenever the ball is thrown in his direction.

According to Springer, Robinson Jr. and Kirtz have embraced leadership roles in the wide receiver room, containing players such as juniors Malik Washington and Raymond Niro III and sophomore Genson Hooper-Price. Robinson Jr. has a mentor as well: his roommate Holman, who helped him acclimate to offensive coordinator Mike Bajakian’s scheme and answered his questions.

“They’ve been working really, really hard,” Johnson said. “We’ve gotten a lot of really good reps in this camp to try to develop that chemistry and get our timing down. I’m just excited for that group. I think they’ve got some guys that are gonna go out and make some plays.”

Rapport with Johnson will be key for the unit’s success in 2021. Two seasons ago, the former five-star quarterback struggled to find his receivers, finishing the year with a 46.3 completion percentage and just one touchdown to four interceptions.

However, people throughout the program noticed Johnson’s improvement this spring and summer, including his receivers.

Kirtz credited the signal caller’s ability to throw downfield and put the throw in the right spot as attributes that made him ready for college football. Throughout camp, Robinson Jr. has noticed these qualities and that his ball “sticks to your hand.”

Robinson Jr. also complemented Johnson on how he stays calm under pressure, one of the reasons he enjoys playing with the quarterback.

With one of the Big Ten’s up-and-coming secondaries headed to Ryan Field, the Cats’ wideouts have a chance to show that they are not only a talented unit. These receivers could be the catalyst for NU’s offense taking it to the next level this season.

“We’re real hungry,” Robinson Jr. said. “If it’s a bad ball or something like that, making the spectacular play that no one expects you to make consistently. Once we get into doing that, spectacular plays become routine plays.”