National labor shortage has little effect on some Evanston restaurants, detrimental to others 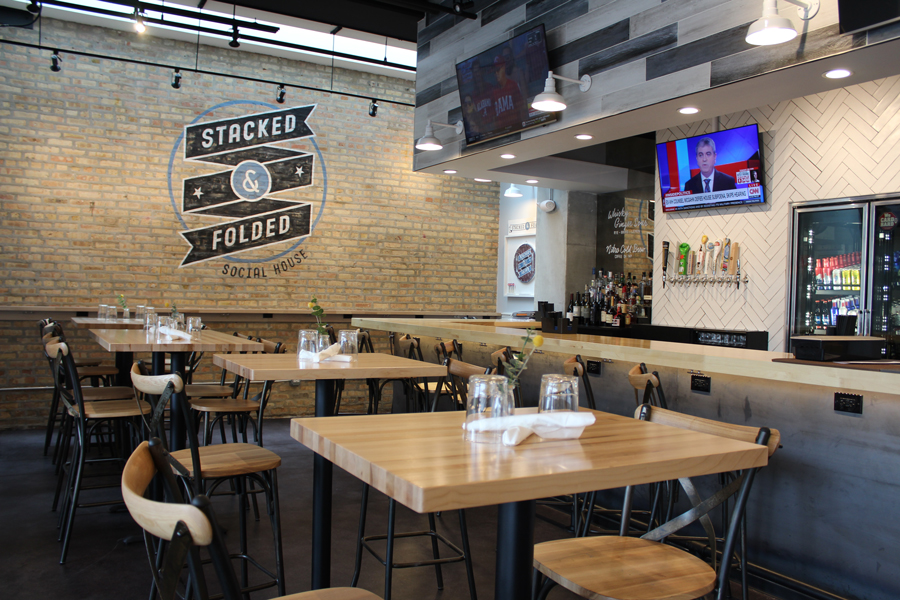 Stacked and Folded Social House. The restaurant is one of many in Evanston that has dealt with staffing changes amid COVID-19.

As COVID-19 has changed the economic landscape of America, many businesses have been dealt crippling blows by a labor shortage spreading across the nation.

But Chris Rimer, a manager at Stacked and Folded in Evanston, said his restaurant has experienced the exact opposite, seeing an influx of delivery and take out orders since the beginning of the pandemic.

“I had to add staff because our business really took off,” Rimer said. “We needed to add more cashiers and more food runners, and the community around here was so supportive of us.”

But Rimer’s experience may be an anomaly. The nation-wide shutdown to mitigate the spread of COVID-19 reduced America’s workforce in industries that are less keen to guarantee flexibility and benefits to their employees, according to an article from Forbes. As a result, workers that were laid off found other forms of employment, leaving many businesses short-staffed once COVID-19 restrictions were lifted.

While Stacked and Folded experienced an influx of support during the pandemic, other restaurants did not fare as well. Local restaurant Five and Dime had to lay off employees to continue running during the lockdown, according to owner Dan Kelch.

Kelch said take out and delivery orders during the pandemic helped keep the restaurant open but did not require the same level of staffing. While the restaurant maintained these services, non-essential employees had to find work elsewhere — which eventually posed a problem.

“These people need to work, so they went out and got jobs at Amazon, trucking firms, or construction firms (among others),” Kelch said. “When the state opened up restaurants again, every restaurant in the state needed to hire these people which caused a major shortage.”

Due to the labor shortage, Kelch said Five and Dime has placed advertisements as far north as Milwaukee, Wis,. and as far west as Rockford.

“We learned more than anything that workforce is a big issue for a lot of these small businesses,” Coakley said. “Mom and Pop businesses have a family member or two which means only one or two employees.”

Downtown Evanston hosted a job fair in July, where the majority of employers were restaurants. Less than 30 job seekers came to the job fair despite 71 open positions, according to Coakley. She said a few restaurants in Evanston had to stall their openings this summer due to a lack of workers.

While the state-wide opening of businesses this past summer has helped some economically, the future of local franchises is yet to be determined. However, the spread of the delta variant does not scare restaurant owners like Rimer.

“People still want to eat, and they still need to eat, especially in this area,” Rimer said. “In the beginning, a shutdown would hurt us, but I think that (business) would pick back up again.”

A previous version of this story misstated the geographic relationship between Evanston and Rockford. The Daily regrets the error.