Year in Review: Evanston’s top stories throughout a transformative year 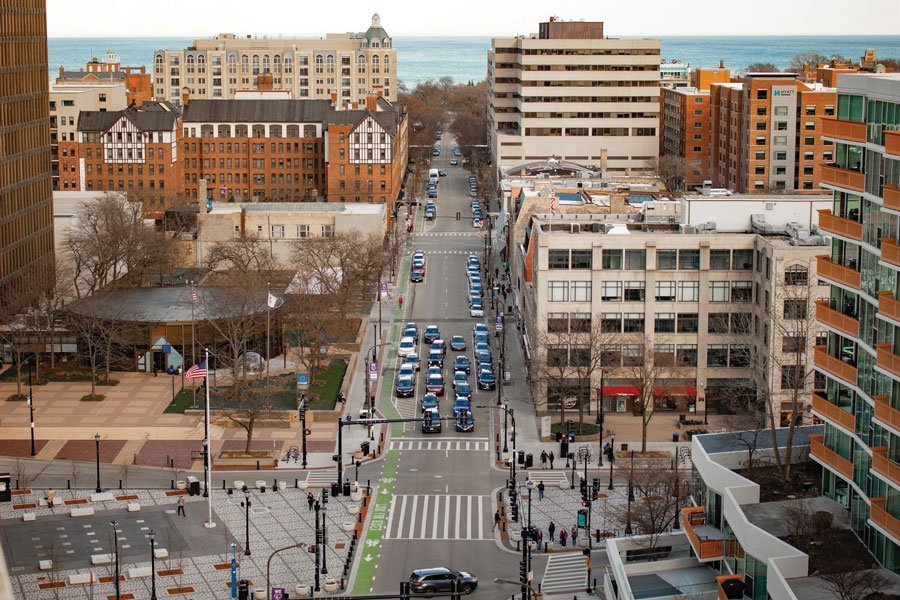 Here's a recap of some of Evanston's top stories from the past year.

Evanston is a robust city that’s transformed significantly over the past year — and it’s now the place you call home. If you’re planning on spending the next four years here, it’s important to be aware of the community you’re living in. To help you do so, we’ve recapped some of the top stories across Evanston from the past 12 months.

Evanston is a city manager-led government, meaning its elected officials (in this case, City Council and the mayor) vote on legislation, but an appointed employee oversees the city’s day-to-day operations.

In late summer of 2019, the city manager at the time stepped down, leading Evanston on a year-long search. Throughout 2020, the early search process began, but the pandemic threw a wrench into the city’s operating procedures, postponing the appointment.

Throughout last fall, the search process concluded, and Evanston appointed then-interim City Manager Erika Storlie to the permanent position. The decision didn’t come without backlash, however, as the delay in the appointment process meant it was close to the end of the term of the 80th City Council.

This, coupled with the fact that some constituents believed Storlie’s selection over the other two finalists, who were both Black women, indicated to some that the decision wasn’t equitable. Community members also said the selection process lacked time for transparency and community input.

After allegations of sexual harassment among lakefront staff surfaced, calls for Storlie’s resignation renewed. On Thursday, a separation agreement was approved by City Council, with her tenure slated to end on Oct. 8.

Just like other cities across the nation, Evanston’s local businesses have been devastated by COVID-19. With over 70 local businesses shuttering in 2020 alone, many community favorites have closed their doors forever.

The city, once known for its diversity in small businesses, has struggled to retain those locally owned storefronts, first in the face of expanding big box retailers and now due to the pandemic. Hospitality industries such as the hotel and restaurant markets were hit particularly hard, with support grants from state and national governments, as well as independent organizations, often not proving to be enough.

Now, local politicians and business leaders are looking to rebuild Evanston’s economy, hoping that reopening plans, coupled with NU’s presence in the city, may be a draw for new locations to open their doors. Only time will tell, however, if the city will recover from its losses.

A year after closing their doors for the pandemic, facilities in Evanston/Skokie School District 65 reopened to allow for students to participate in hybrid learning. The planned reopening, delayed for months, eventually occurred in March.

However, over the course of the closures, Evanston students were forced to adapt to new methods of schooling andlocal parents sometimes struggled to obtain child care. This issue hit home especially hard for parents of disabled children, as well as those with high-risk health decisions.

When schools reopened, the decision to send a child back to school was deeply personal for each family, with factors such as socialization and educational experiences weighing against the risks of COVID-19. Ultimately, about half of families initially opted to send their kids back into the classroom.

Next year, students across the state will return to in-person instruction, with some variances on mask mandates at the moment. As the start of the school year draws closer, districts will need to refine and finalize their plans as they prepare to begin yet another academic term.

Residents take to the polls

2021 was an election year in Evanston, with residents getting the chance to vote on their elected officials for the next four years. On the ballot was a mayoral slot, as well as every other seat on City Council and the role of City Clerk.

When the dust settled, the city found itself with a new mayor — former state Rep. Daniel Biss — as well as four new alderpeople and a new City Clerk. After former Mayor Steve Hagerty decided not to run for re-election, Biss swept the field in the city’s February primary, winning by a large enough margin that he didn’t need to go to a general election. For the other roles, the primary narrowed the field to two seats.

In April, Clare Kelly (1st) narrowly unseated the incumbent Judy Fiske. Jonathan Niewusma (4th) and Devon Reid (8th) both won their respective races against newcomers, with the incumbents in their wards falling in the primaries. Rounding out the four new alderpeople was Bobby Burns (5th), who won against a fellow newcomer as the incumbent decided not to run for re-election. The five other alderpeople all won re-election.

Moving forward, these officials will shape city policy until the next election, which will take place in 2025.