Football: Ahead of 2021 season, Northwestern looks forward to the journey for a Big Ten Championship 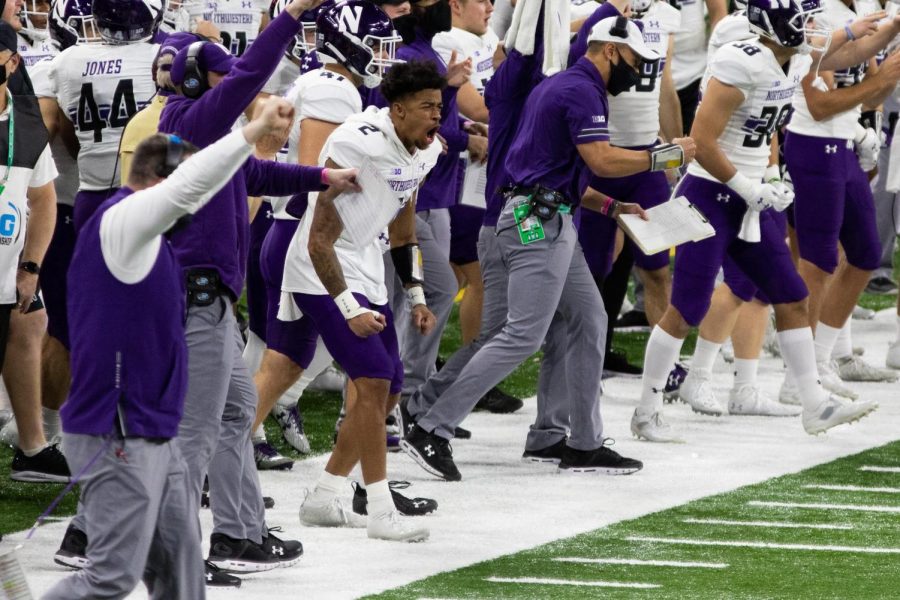 The Northwestern sideline celebrates during the 2020 Big Ten Championship Game. In 2021, the Wildcats are looking to return to Indianapolis for the third time in four seasons.

Three trophy cases line the wall inside the Walter Athletics Center near the entrance of Wilson Field.

From left to right, the cases lay out the order of Northwestern’s goals each season: “Win the West Division,” “Win the Big Ten” and “Win Our Bowl Game.”

Some years, the cases remain empty. Some years — like 2018 and 2020 — the first and third will include a trophy. However, since the $270 million facility’s construction, the second case has been vacant.

The Wildcats are looking to change that.

“Northwestern is here to stay,” sophomore running back Cam Porter said. “We can compete with anybody in the country. Now we just have to finish what we started.”

Coming off two appearances in the Big Ten Championship Game in three seasons, NU is looking to bring the Stagg Championship Trophy back to Evanston.

It was a palpable feeling during the Big Ten Media Days at Lucas Oil Stadium in Indianapolis — the site of the conference title game.

Coach Pat Fitzgerald said “There’s a trophy somewhere around here that I haven’t gotten.” Porter said his team has the talent to bring home a Big Ten championship, despite returning the lowest amount of production in the Power Five from last season at 39 percent.

For All-American sophomore safety Brandon Joseph, it is “Big Ten or bust.”

In 2018, the Cats bounced back from a 1-3 start to win five of six consecutive games and book their first-ever spot in the Big Ten Championship.

After going 3-9 the following season, Fitzgerald pledged “this type of record will never happen again” and that his team would return to Indianapolis.

He stayed true to his word. In 2020, the Cats went 6-1, registered no positive COVID-19 tests during the season and came within 18 minutes of winning their first conference title.

“You look back at ’19 when we started getting back going and then COVID hit, we felt like we were in a good place,” Fitzgerald said. “And all hell broke loose. It just takes consistency in your approach.”

That consistency led to a bounce-back season — one of the best in team history — after the worst season of Fitzgerald’s coaching career. It has led to high school athletes trusting in Fitzgerald’s vision — NU’s 2022 recruiting class is currently ranked 26th in the nation and sixth in the Big Ten.

Most of all, it has led to confidence in current players and coaches as the Cats continue their climb into the national spotlight.

However, there are still doubters. Of the 34 voters for the 2021 cleveland.com Preseason Big Ten Poll, nobody picked the Cats to win their third Big Ten West title in four years. In the poll, NU is projected to finish third in the division behind Wisconsin and Iowa.

“Every single year, we get something like that,” senior offensive lineman Sam Gerak said. “(If) you start caring too much about what this poll or that is saying about you, you’re not gonna succeed. It has no impact on how we’re gonna play.”

And the groundwork for future success has begun in the offseason. The quarterback competition between South Carolina transfer Ryan Hilinski, senior Hunter Johnson and senior Andrew Marty will be underway throughout camp in the summer. New defensive coordinator Jim O’Neil will continue breaking in his defensive scheme.

Players will battle for increased roles at positions such as wide receiver, linebacker and defensive line following 2020 starters departing for the National Football League or graduating.

Fitzgerald knows the stakes for his 2021 squad. As a result, he believes in their ability to bring a Big Ten title to the shores of Lake Michigan and finally put an accolade in that second trophy case.