Students host vigil in solidarity with Palestinian and MENA community members, mourn lives lost to violence in the region 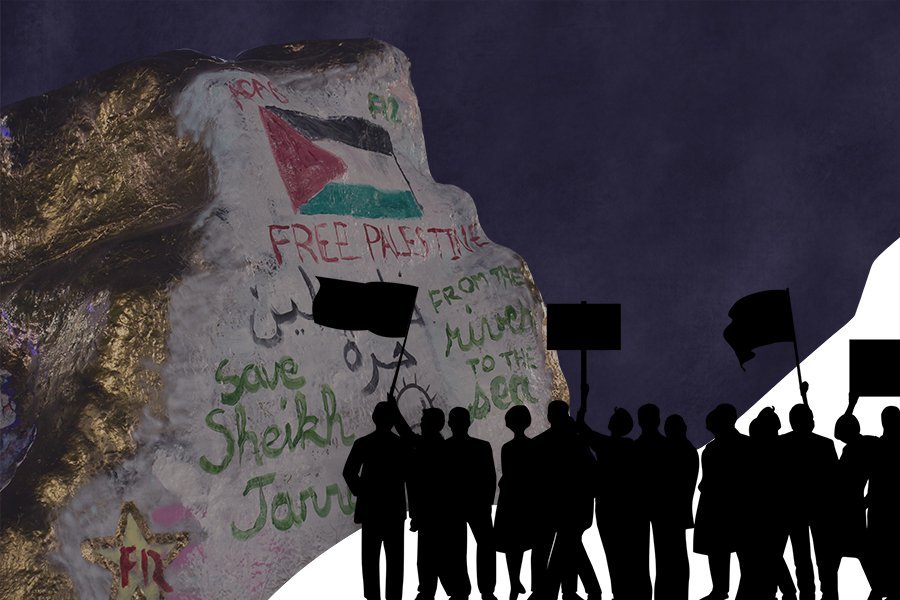 Even though the vigil was held on June 7, the first day of finals week, over 100 students attended the event where members of the Northwestern community mourned civilians murdered by the Israeli military.

Student organizations hosted a vigil at the Rock to stand in solidarity with Palestinians and Middle Eastern North African students as they grieved recent and generational losses.

Groups requested anonymity for safety reasons. Even though the vigil was held on June 7, the first day of finals week, over 100 students attended the event where members of the Northwestern community mourned civilians killed amid the Israeli government’s military attacks in the region.

The event started after organizers lit candles on the ground in front of the Rock’s enclosure. Students with Palestinian, MENA and Jewish identities gathered to represent the affinity and political student groups that co-organized the vigil. The speeches emphasized solidarity between Muslim, Jewish and Christian students across the Palestinian community.

During the initial speeches, a Muslim Palestinian speaker held up a picture of Handala, an illustration of a young boy with hands joined behind his back that symbolizes Palestinian resistence.

Handala symbolizes every Palestinian child and their families whose lives were interrupted by violence, the McCormick junior said.

“I want to give them the privilege of being known as humans disentangled from a demeaning label or a government that has had control over their entire lives,” she said in the event. “They were Palestinians with dreams and aspirations. They were by far the bravest and fiercest people, the most determined souls and the ones who could find happiness in absolutely anything. They are not numbers.”

Other speakers also shared statements of solidarity with Palestinian human rights activism and stories of family members’ experiences. They continually emphasized the resilience and intersectionality of the Palestinian community and allies.

Organizers also highlighted recent developments in the region, which have led to many Palestinian civilian casualities. In April, Human Rights Watch announced that Israeli authorities passed the threshold of crimes against humanity in certain regions. Furthermore, B’Tselem, the Israeli Information Center of Human Rights in the Occupied Territories, defined the government’s control in the West Bank an apartheid regime.

After student speeches, speakers recited Islamic, Judaic and Christian prayers. Organizers then asked attendees to form a large circle lining the courtyard area around the Rock where they stood with candles, exchanging flames.

Organizers read the names of more than 231 people who recently died amid attacks by the Israeli military, including names of children and their ages. However, a speaker remarked to The Daily that by the time of the event, over 250 had died.

A MENA speaker at the event said that the vigil was motivated by a lack of public recognition of Palestinian deaths from the University. On top of this, the student said, there has not been a designated space for mourning or support for affected students across different identity groups, she said.

However, the turnout at the vigil made the junior hopeful about the movement in support of Palestinian human rights.

“I know there’s a lot of people who are affected by this who are scared to speak out because there is no safe space for students to grieve for Palestine,” she said. “More and more people are beginning to speak up.”

The student emphasized that the vigil was in support of Palestinian human rights. The organizers want to highlight that it is a human rights issue above a political issue, she said.

Mubarak Hassan, a Medill sophomore who attended the event, also said he was glad to see momentum building in support of Palestinian human rights.

“The silence should not continue for much longer,” he said. “We’ve garnered their attention, and at this point the ball is in the University’s court to make a stance on this issue.”

He referenced Associated Student Government’s May 26 vote that affirmed support of human rights in the region and denounced the actions of the Israeli government’s military.

A Weinberg freshman who attended the vigil in support of the issue said that he hoped to see the University administration’s response to the movement.

“Students are loud, but people who have power — they’re very quiet,” the freshman said.