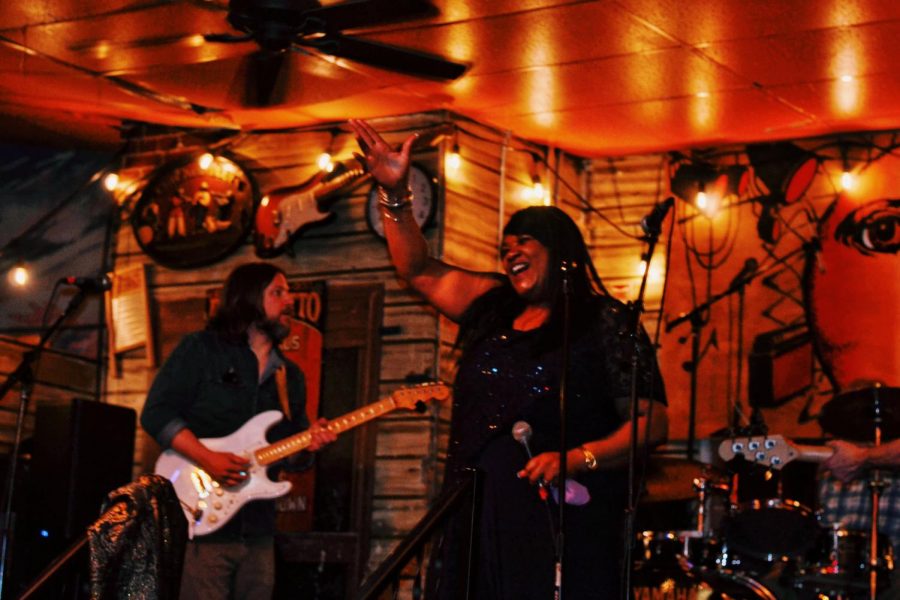 Nora Jean Wallace, reaching out to the crowd and smiling during a set at Kingston Mines in April.

As many bars close their doors for the night and patrons walk down the streets of Lincoln Park, the faint sound of blues music can be heard in the distance. The voices and instrumental stylings of performers at Kingston Mines still ring out into the night for hours, sometimes lasting until 4 a.m.

Inside, visitors are greeted with an intimate atmosphere, filled with drinks, food and powerful vocals. And blues fans and musicians throughout the world hold Kingston Mines in high regard — a Chicago mecca for talented acts eager to cut their chops in a well-known blues community.

The Lincoln Park bar, located at 2548 N. Halsted St., first opened its doors as a theater company and cafe in 1968. Frank Pellegrino, the son of founder Lenin “Doc” Pellegrino, said early patrons could pay 50 cents to sit all day and listen to folk musicians. The same joy can be felt today, he said.

“(Kingston Mines) is the most fun you can have with your clothes on,” Pellegrino said. “That sounds funny but really, people sometimes disconnect everything out there beyond the door and completely buy into what’s going on here.”

In April, Nora Jean Wallace, a Chicago blues vocalist, performed at the bar, dancing, fully immersed in the music. Though restrictions during COVID-19 prohibited dancing, the music had fans rocking in their chairs. Wallace said Kingston Mines is one of the best clubs she has ever worked at.

“Kingston Mines just number one, baby,” Wallace said. “This place used to be packed all through the week. Everybody worked. They help the musician, they keep ’em workin’.”

Wallace added when she hits the stage, she “just (goes) for it from the heart.”

Like many early blues musicians, Wallace said she migrated from the Mississippi Delta to Chicago with the dream of playing Chicago blues, an evolving genre that electrified the acoustic sounds that sprouted out of the cotton fields in the South.

Economics in the music business has historically been turbulent. In the 1970’s and 80’s, blues clubs proliferated in the Chicago area. The majority of these clubs buckled decades afterward, unable to turn a profit. But Kingston Mines survived.

“The idea is to keep the music and the musicians alive and well,” Pellegrino said. “When guys and gals come here to play music, they make a decent living wage for what they are providing people.”

Joanna Connor, a regular guitarist at the bar, first performed at Kingston Mines in the 1980s with Dion Payton and the 43rd Street Blues Band before creating her own backing band that has held the gig since 2005.

Connor said she enjoys playing at Kingston Mines because the crowd skews younger than most blues clubs, and they tend to have more energy and openness to different styles of playing.

“A lot of people like the atmosphere, and that it is loose,” Connor said. “There is so much music, and it’s open late. I also think there is a realness people gravitate toward.”

Mark Croghan, a longtime patron of Kingston Mines and frequent harp player at jam sessions, said fans and performers create a positive atmosphere at the venue.

“I have never seen somebody not smile there,” Croghan said. “People are into the music and when they have a full house people are dancing the whole time.”

Connor said the Chicago club possesses both a unique funkiness and a renowned global reputation. She has seen Kingston Mines shirts in Holland and Taiwan while on tour, she added. Many notable musicians have called the club home for a night — the likes of Mick Jagger, Eric Clapton, and Koko Taylor have all graced Kingston Mines’ stage.

Pellegrino said Kingston Mines is a great value. The crowd is able to hear blues musicians respected around the world at a reasonable price.

“People are so spoiled by what they have,” Pellegrino said. “People see them here and might see them around the world because they had such a good time here.”

Harboring an optimistic view for the future of the blues, Pellegrino said musicians gravitate to Chicago, referring to it as the “motherland.” For the abundance of talent, there are few clubs like Kingston Mines offering a platform — Pellegrino estimated on a given night less than one percent of blues musicians are working.

Thaddeus Scott, a security guard at Kingston Mines, said the club provides an essential musical service, especially needed after being on lockdown for so long.

“Everyone has a blues itch to scratch ’cause everybody’s been on lockdown,” Scott said. “This seems to be the only place that is scratching that itch.”