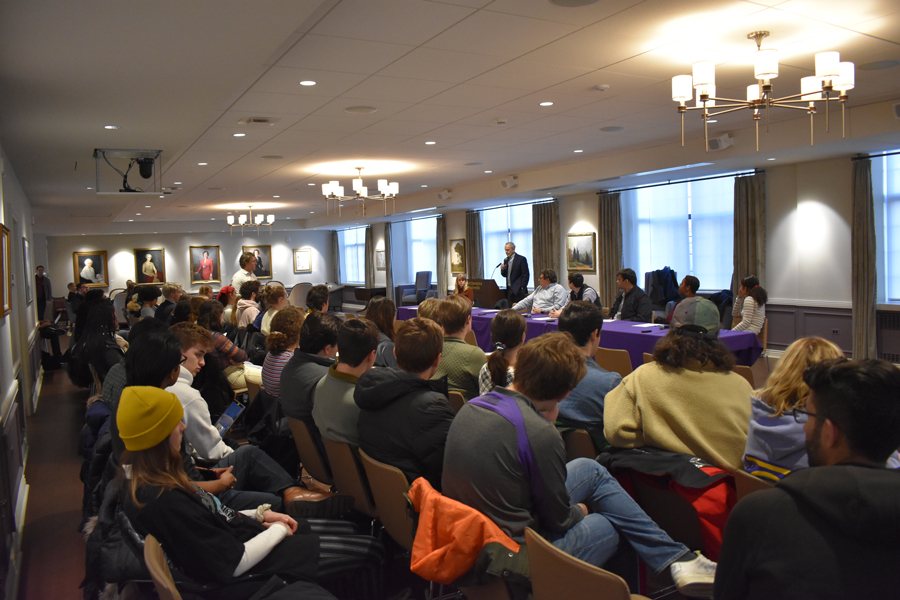 The quarterly event was held as a part of ACIR’s efforts to open conversation to the Northwestern community.

The Advisory Committee on Investment Responsibility discussed transparency and campuswide communication in a June 3 meeting.

The event was a part of ACIR’s efforts to open conversation to the Northwestern community. Attendees engaged with committee members and Amy Falls, who began her position as NU’s chief investment officer at the beginning of May.

ACIR chair and psychology Prof. David Uttal opened the meeting by stating the year was a transition in reconsidering the committee’s roles after the Board of Trustees rejected a bid to divest from top 100 coal, oil and gas companies in February 2020.

Since the objective of ACIR is to hear community proposals, the decision made the committee reconsider its mission, accelerated by Falls’ arrival, Uttal said. The awareness of responsibility and accountability has still continued to grow as of recent, he added.

“It’s very much a time of change in the country in that it is no longer acceptable or responsible or wise to destroy the environment,” Uttal said.

Uttal also gave an update on student calls to divest from military agencies such as Raytheon, Boeing, Lockheed Martin and more.

Since June 2020, students have called for divestments from military agencies along with University Police and other law enforcement institutions.

“It turns out that the University had no individual investments in any of those companies,” Uttal said. “Therefore, no action was required. We already met the goals of that proposal.”

One of the remaining goals for the committee is better communication, Uttal added. He said that there has been a “substantial amount of frustration” about the lack of communication from the campus community. On the other hand, Uttal said, the Board itself believes it interacts sufficiently with students.

Furthermore, as a private university, NU has stock in non-public options such as venture capital, Uttal said. He added that Falls is committed to as “much transparency as legally possible.”

Falls said the University does not always own the shares directly, but has enormous influence over the stock managers it hires.

An effective method of responsible investment advocacy is collaboration across educational institutions, she said.

“I do feel that we’re much stronger together,” Falls said. “And even though we may all have slightly different nuances, I think in the big picture, collaboration is very useful.”

When asked to clarify what cross-institutional collaboration looks like and whether she knows if certain colleges share an investment manager with NU, Falls brought up divestment in Sudan as an effective example of such partnership. In 2005, the University announced that it instructed managers to sell any holdings to companies that have financed violence during a period of genocide in Sudan. Then, University leaders said they were working with student advocates.

Furthermore, Falls said she has a collaboration with ACIR and that they already have statements from other universities. She said she plans to meet with university representatives during the summer.

Falls also said that the environmental divestment movement should research paths to investment responsibility. She said that the University is “very close” to investing with a firm with sustainability technology and water.

“We’re not necessarily going to sell what we’ve done and what we have,” Falls said. “I think the point is, there are a lot of nuances and, in some ways, a lot of creativity and thinking about what could be effective.”

Lucy London, the student representative to the committee and a member of Fossil Free Northwestern, called on the University to work with students to solidify ways it can support their demands.

ACIR should hold meetings, both public and private, over the summer, London said. Uttal, who serves as chair for the 2020-21 academic year said he was unsure about meeting over the summer as he does not know the composition of ACIR’s leadership next year. He asked to discuss the matter internally.

However, London said it feels as though students are seeing a dead end in ACIR.

“I think that should not be the case,” London said. “Obviously ACIR is the body that should be promoting and helping us communicate with the Board.”

— Administrators commit to transparency and cultural change, but not to divesting from Northwestern police