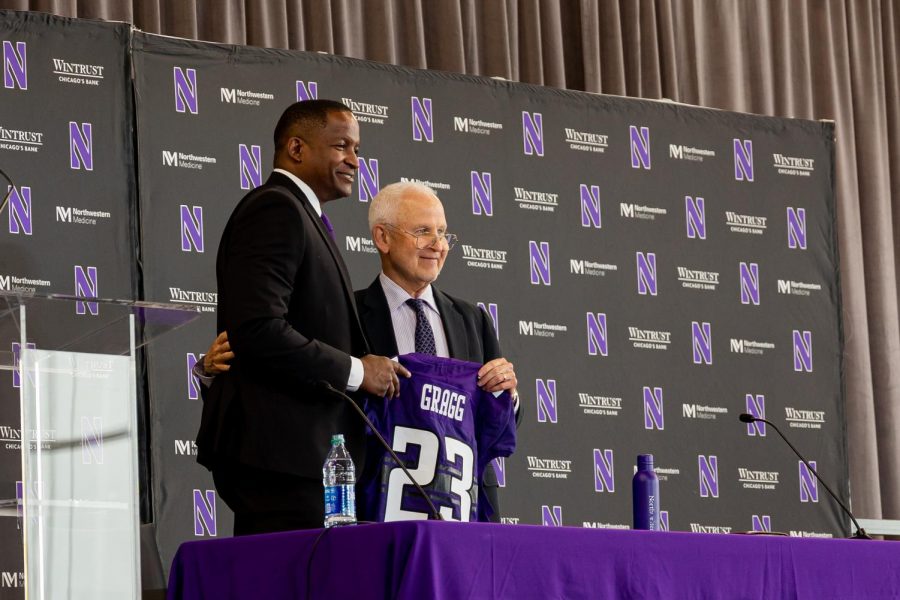 Incoming athletic director Derrick Gragg shared his goals for Northwestern athletics, his views on the student-athlete experience and his support for a renovation of Ryan Field in an introductory press conference Monday.

The event took place at Ryan Fieldhouse, where University President Morton Schapiro and Big Ten Conference Commissioner Kevin Warren introduced Gragg as the 23rd athletic director in NU history. He will begin his tenure on July 1.

Gragg will come to Evanston after serving as the NCAA’s senior vice president for inclusion, education and community engagement. He was previously the athletic director at both Tulsa and Eastern Michigan, and he played football as a student-athlete at Vanderbilt. Gragg said he is looking forward to assuming the new role at NU.

“Northwestern doesn’t play second fiddle to anybody,” he said. “That’s the way I am and I’m looking forward to being a part of that. One of the best universities in the country, bar none in the best conference, and with one of the best athletic programs. You can’t beat that.”

Coming from a position focusing on inclusion in college athletics, Gragg said he is looking forward to engaging with students on issues surrounding social justice, and he wants to have conversations that can lead to action plans.

Gragg also emphasized that the creation of these initiatives need to center the views of the major stakeholders involved, such as faculty, students and constituents.

“We expect our student-athletes to interact with leadership,” Gragg said, adding that he hopes to hear from students about their concerns.

Additionally, Gragg said some major issues in college athletics today include rights for transgender athletes and gender equity in sports.

Along with motivating students to work hard and succeed on the field, Gragg also encouraged student-athletes to participate in organizations that give back to the local community.

“I’ve been involved in college athletics a long time and I’m telling you when you do it the right way, that’s the only way to do it,” Gragg said. “Those are the expectations that we’ll maintain with our student athletes. We want to build our foundation as the premier academic and athletic program in the conference and one of the best in the entire country.”

In his part of the conference, Schapiro said Gragg was on the “wish list” of candidates to succeed former athletic director Jim Phillips after he left NU to become the commissioner of the Atlantic Coast Conference back in January.

However, at the time Gragg said did not want to proceed in the search process, according to Schapiro. Instead, the University promoted Deputy Athletic Director Mike Polisky to athletic director.

Polisky’s hire sparked immediate backlash from the campus community since Polisky is named as a defendant in a federal lawsuit alleging sexual exploitation in the cheerleading program. An investigation by The Daily also included multiple sources alleging Polisky of inadequately handling complaints of racial discrimination.

Polisky eventually resigned after nine days in the role, leading the search committee — now headed by interim athletic director and Linguistics Prof. Robert Gundlach — to circle back to Gragg.

“The first thing the committee and the chair did was to look at the people originally on the dream list, and Derrick’s name was there,” Schapiro said. “We approached him again and he said ‘You know what…I think I’m willing to go forward in conversations.’ Once that happened very quickly, we visited him and we fell in love. Thank God he agreed to come.”

Warren added that Gragg’s experience as a student-athlete at Vanderbilt is one of the qualities that will make him a supportive leader at NU. He believes that Gragg will do “everything he possibly can” for the University’s student-athletes and create a more holistic approach to support their physical, mental and emotional well-being.

The commissioner concluded his remarks by honoring Gragg’s mother for setting her son on a path to success and praising the new leader.

Following several athletic building upgrades under Phillips — including the construction of Ryan Fieldhouse and Walter Athletics Center and the renovation of Welsh-Ryan Arena — Schapiro proposed another facility for Gragg to improve: Ryan Field.

Built in 1926, Ryan Field has not received any not updates since the 1990s, and Gragg supported the idea of renovating it.

“That’s the next project,” Gragg said. “I’m ready to go with it, jump into it with both feet and get it done because our student-athletes, as President Schapiro mentioned — they’re top notch. They deserve to play in the best facilities that are available.”

Less than four weeks away from the start of his new role, Gragg is looking forward to interacting with coaches, staff and student-athletes, he said. But most of all, he is ready to make an impact on the shores of Lake Michigan.