Recapping Northwestern’s best sports moments of the past four years 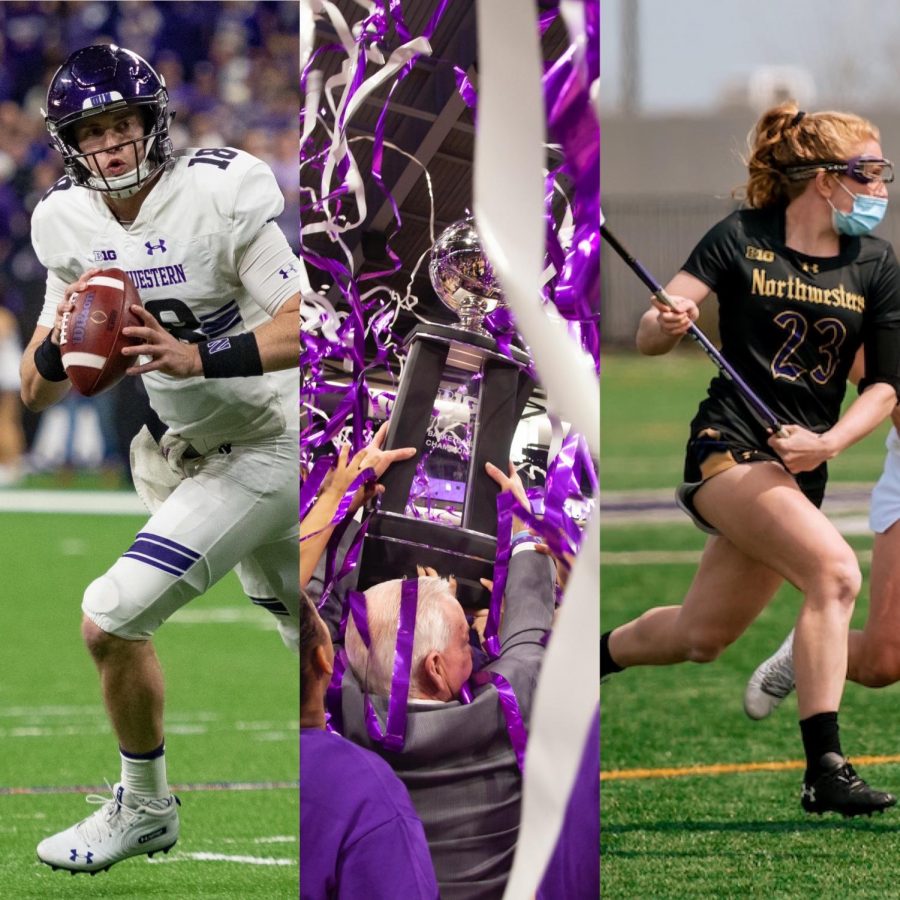 3/18/18: Olivia Rosendahl wins back-to-back national titles
Olivia Rosendahl finished her collegiate career as one of the most accomplished individual athletes in Northwestern history, and with good reason. Rosendahl won two straight NCAA titles in 1-meter platform diving in 2017 and 2018, and became the first Wildcat to ever earn Big Ten Diver of the Year honors.

11/2/18: Welsh-Ryan reopens after renovation
It was a weekend to remember in Evanston. After a 20-month, $110 million renovation, the new Welsh-Ryan was broken in with a men’s basketball exhibition win over McKendree.

The grand reopening coincided with Northwestern’s first football game against Notre Dame at Ryan Field since 1976, and capped off a grand year for Northwestern athletics — in April, the $270 million Ryan Fieldhouse training facility on the lake opened its doors.

The 2018 football season had its highs and lows, but the December trip to the Big Ten Championship Game in Indianapolis might be the one that lives most vividly in the memory.

A senior-heavy team guided the Cats through the Big Ten West gauntlet, clinching the division title for the first time in program history and setting up a date with Ohio State for the conference crown. Northwestern lost the game, but it gave its fans a day to remember — the university offered free tickets and transport to undergrads, and more than 3,000 students watched live.

The season ended on a high with a surreal comeback win over Utah in the Holiday Bowl in San Diego.

5/3/19: Softball wins program-record 21 Big Ten games
Northwestern finished the season 47-13, its best record since 2007, and the Wildcats’ 21 Big Ten wins were their most in program history. From late March through early May, they won 20 straight games, led by rookie phenom Danielle Williams. In the postseason, Northwestern took home its first NCAA Regional title since 2008, inserting itself back into the national spotlight and creating a palpable buzz on campus.

5/19/19: Lacrosse returns to Final Four for first time since 2014
For the first time in five years, Northwestern was back playing lacrosse on Memorial Day weekend. The 2019 season saw the Wildcats return to the form of their peak dynasty days: Star attacker Selena Lasota was one of five finalists for the Tewaaraton Award, given to the sport’s top college player; freshman Izzy Scane broke out onto the scoring scene; and the Wildcats won their first-ever Big Ten title, taking down longtime rival Maryland.

The Wildcats capped off a memorable regular season with a Senior Day win over in-state rival Illinois in front of a 4,016-person crowd at Welsh-Ryan Arena, its largest for a women’s game since its reopening in the fall of 2018. Led by junior Lindsey Pulliam, sophomore Veronica Burton and seniors Abbie Wolf and Abi Schied, Northwestern set a record for program wins and earned a spot back in the national women’s basketball conversation.

3/8/20: Rivera and Deakin win conference titles
Northwestern had one of the best 1-2 punches in all of college wrestling during the 2019-20 season. At 133 pounds, Sebastian Rivera won his second individual Big Ten title, despite an injury-riddled campaign, and Deakin finished with a conference crown and a perfect 21-0 record. Both were slated to be the No. 1 seeds in the 2020 NCAA Championships before COVID-19 cancelled the tournament, but Deakin and Rivera cemented their places as two of the best wrestlers in program history.

3/12/20: Big Ten cancels all sports until 2020-21 academic year
As COVID-19 cases and concerns rose nationally, the NCAA and the Big Ten announced the cancellation of all upcoming games and a pause on all recruiting efforts. Northwestern had 13 sports in season, and those campaigns all came to an abrupt end. Women’s basketball was expected to earn a top-four seed and host NCAA Tournament games in Evanston for the first time since 1993, but both the men’s and women’s tournaments were not played.

12/14/20: Jim Phillips departs to become ACC commissioner
After more than 12 years at Northwestern, longtime athletic director Jim Phillips was named the new commissioner of the ACC. Under Phillips, Northwestern had seen unprecedented levels of success, from national championships and bowl games to facility upgrades and marketing strides. Before Phillips departed, he brokered a ten-year contract extension for Pat Fitzgerald that’ll keep Northwestern’s most recognizable face in Evanston until 2030.

12/19/20: Football returns to the Big Ten Championship Game
Led by grad transfer quarterback Peyton Ramsey and one of the country’s top defenses, the Wildcats rebounded from an ugly 2019 season to win the Big Ten West again, and take a trip back to Indianapolis. At one point, Northwestern was as high as No. 11 in the AP Poll, its best ranking since 1996 — for a very brief moment, the Wildcats were even in the College Football Playoff conversation. Northwestern fell again to Ohio State in December, this time at a fanless Lucas Oil Stadium, but it still ended the season with a win over Auburn in the Vrbo Citrus Bowl.

3/24/21: Women’s basketball makes first NCAA Tournament since 2015
After its chance at a postseason run in 2020 was cut short, Northwestern didn’t throw away its shot in 2021. Behind the scene-stealing duo of Pulliam and Burton, the Wildcats finished with a 15-8 record and earned a No. 7 seed in the NCAA Tournament. Northwestern won its opening matchup against UCF — its first tournament win in 28 years — but their season ended with a loss to Louisville in the second round. In April, Pulliam became just the third player in program history to be selected in the WNBA Draft, going to the Atlanta Dream in the third round.

May 2021: Amid controversy, Mike Polisky named AD, but resigns 10 days later
On May 3, Northwestern announced that its search for the university’s next athletic director was complete. Deputy AD Mike Polisky was promoted to the top job, having served under Phillips for nearly a decade, but the decision was met with campus-wide backlash that garnered national attention.

Polisky was named in a federal lawsuit in which a former cheerleader alleged sexual exploitation and racial discrimination inside the cheerleading program. The University administration and some in the athletic department defended the hire, but students, faculty and staff staged protests after the appointment. Polisky eventually resigned from the job on May 12. On June 4, Derrick Gragg, the NCAA’s senior vice president for inclusion, education and community engagement, was named the next AD.

5/24/21: Lacrosse advances back to Final Four after historic regular season

The world first saw glimpses of Izzy Scane’s talent in 2019, but 2021 was the year the Scane Train really left the station. The junior scored a program-record 98 goals and 124 points, powering Northwestern to an undefeated regular season and back to the Final Four. Scane became the program’s latest Tewaaraton finalist — the only junior in the group of five nominees. The Wildcats fell again in the national semifinal, this time to Syracuse, but with Scane returning in 2022, they’re sure to come back with a vengeance.