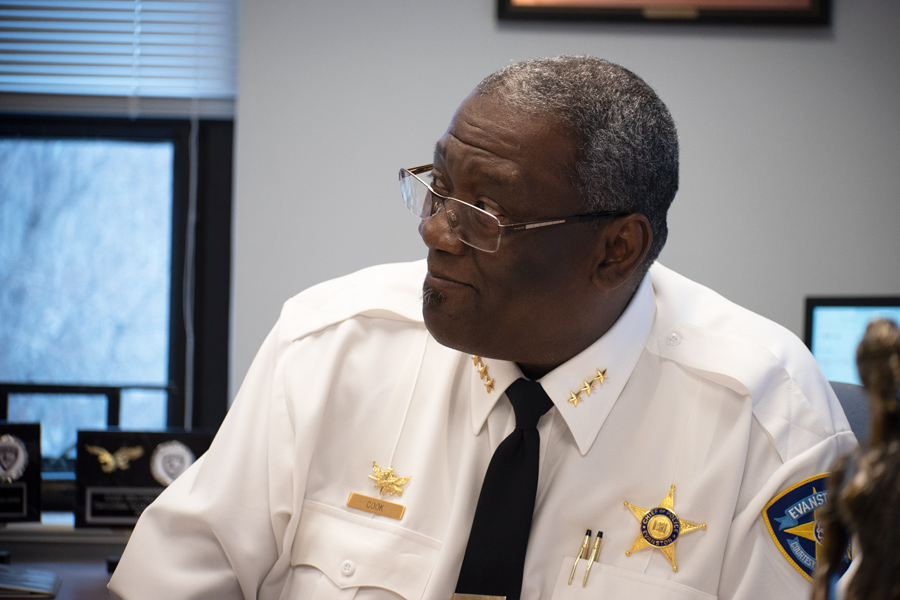 Demitrous Cook in 2019. Cook retires as police chief only two and a half years after taking the position at the start of 2019.

“It has been an honor to serve this community for more than 30 years,” Cook said in the statement. “I would like to thank the entire Evanston community, City Manager Erika Storlie and the Evanston City Council for their support as we have worked to improve quality of life, solve problems, and make our city safer for all who live, work and visit here.”

The city has not disclosed the reason for Cook’s retirement. EPD and several city officials — including Storlie, Cook and Mayor Daniel Biss — did not immediately respond to requests for comment.

The announcement comes after a weekend of public speculation around Cook’s status as chief, and the part that Storlie played in his retirement.

“It is the understanding of the Board that Chief Cook met with Evanston City Manager Erika Storlie and Deputy City Manager Gandurski. They asked him to resign as Police Chief. At this time we are aware of no known cause or justification for the resignation request.” Brown said in a statement to The Daily.

The city has not commented on the role Storlie played in Cook’s retirement. As city manager, Storlie has executive power over the regular functions of the city’s government, including the hiring and termination of city staff. Brown said the Board voted unanimously to issue a statement of support for Cook to Storlie, Biss, and city council members.

Cook began his career in law enforcement in 1981 at Northwestern’s University Police, before moving to EPD in 1984 and becoming a patrol officer. He stayed in the department for 26 years, eventually rising to the rank of deputy chief in 2004.

In 2010 he left EPD to serve as chief of the Glenwood Police Department in the south suburbs. He later returned to Evanston at the beginning of 2019 to become police chief, following the retirement of former chief Richard Eddington.

The retirement also comes less than a month after Biss established the Reimagining Public Safety Committee with the goal of analyzing and recommending changes to the police department’s budget and operational scope.