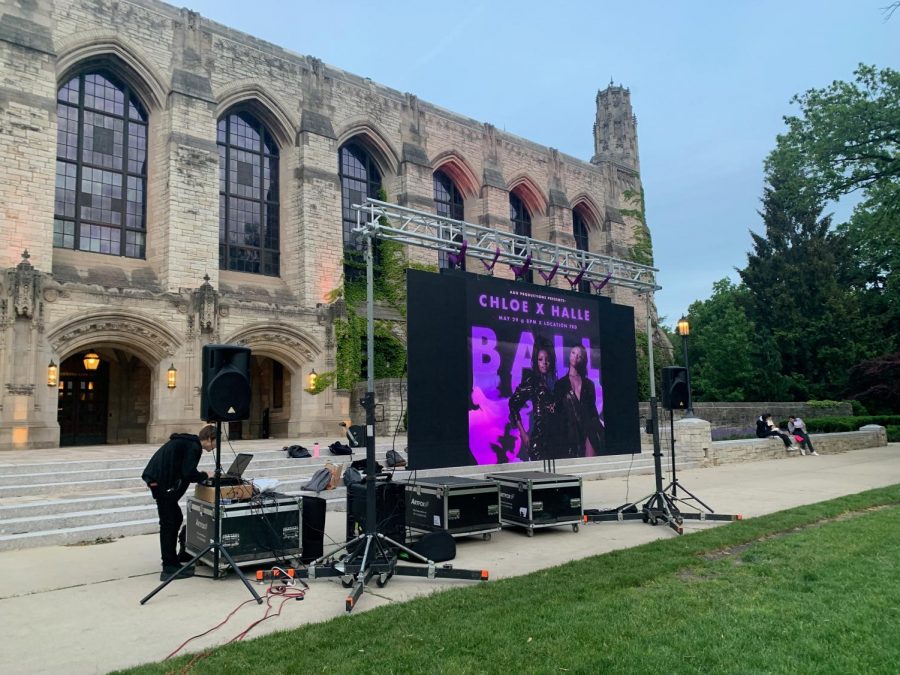 Outdoors in-person Chloe x Halle screening on Deering Meadow. Chloe x Halle opened their set with nostalgic groove “Happy Without Me” and ended with a peaceful rendition of “Cool People.”

R&B sister duo Chloe and Halle Bailey, better known as Chloe x Halle, dished on their artistry  after performing some of their top songs at Sunday’s A&O Productions 2021 Ball.

The screening was A&O’s first in-person event of the academic year. Northwestern students could attend the event on their computers or Deering Meadow, where admission was capped at 150 due to safety considerations. After the musicians performed their set, they took student questions compiled before the event.

Chloe and Halle Bailey opened their set with nostalgic groove “Happy Without Me” and ended with a peaceful rendition of “Cool People.” Playful, trash-talking “Busy Boy” and an acoustic version of their summer TikTok hit “Do It” were also among the setlist.

Chloe Bailey said the duo’s musical influences include Beyoncé, Jill Scott, Grimes and Snoh Aalegra. The sisters got their start by posting covers of songs on YouTube at ages 13 and 11. Their 2013 cover of Beyoncé’s “Pretty Hurts,” which gained more than 20 million views, grabbed the singer’s attention.

The sisters then signed under Beyoncé’s label Parkwood Entertainment and have since performed alongside her in numerous tours, most recently for the U.S. leg of her 2018 “On the Run II Tour.”

“Every time I see her, she’s so gracious, but I do get starstruck just a little bit inside,” Chloe Bailey said. “I mean, it’s Beyoncé. I don’t think it’ll ever get old.”

When asked about their creative process, Chloe Bailey said she prefers to go with the flow, and refrains from putting time stamps on any of her projects. She said the duo’s first album took three years to release, after putting out an EP and a mixtape along the way.

Despite the duo’s famous associated acts, Halle Bailey said the sisters are freelancers, and that she regards the duo’s music as “diary entries.”

“We like to just throw paint at the wall and see what sticks,” Halle Bailey said. “We feel that whenever it gets formulaic, we’re like, ‘Stop it.’ This is not organic. This is not the way to go.”

A student moderator also asked how astrology influences their relationships, both platonic and romantic. When it comes to the Zodiac, Halle Bailey is an Aries Sun and Chloe Bailey is a Cancer Sun.

Halle Bailey said she has a great sister relationship with Chloe Bailey as an Aries-Cancer duo. She appreciates her younger sister’s Cancerian patience and calm attitude toward conflict — but she wouldn’t date a man with a Cancer Sun sign.

“As an Aries, I’m very headstrong,” Halle Bailey said. “In an argument, I want somebody to scream it out with me… (so) in terms of love, I’m not sure I’m going for Cancer.”

Kubair Chuchra, a productions committee member, attended the Deering screening of the event. The Medill and Weinberg junior said there was back-and-forth communication with the University to make sure the event was as COVID-19-conscious as possible.

“With the campus status going to green, the school approved an in-person event,” Chuchra said. “The timing just worked out well, and it’s good that things are looking better on campus.”

All 150 slots filled up, he said, and there were people waiting on standby.

Communication freshman Frances Mary McKittrick, attended the in-person portion of the event. Even though Chloe x Halle were not present themselves, she said the event was meaningful to her.

“Especially the last song, ‘Cool People,’ was really lovely to hear back with all these people in a social setting,” McKittrick said. “It was like, ‘Oh my god, there are cool people in the world and I can see them now.’”