Riker: This academic year showed Northwestern athletics at its best. Then, we saw its worst. 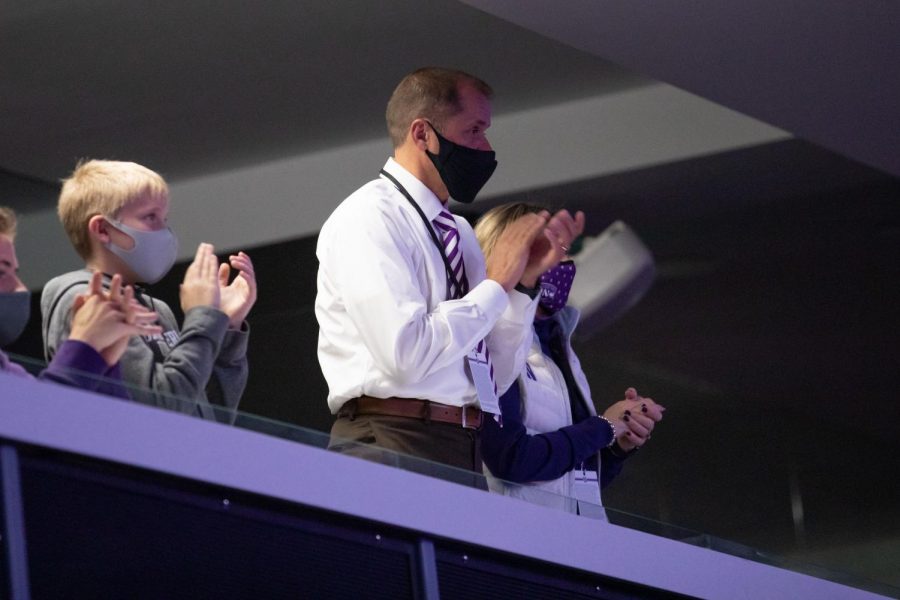 For Northwestern, the 2020-21 athletic calendar was a study in dualities.

The emotional tolls and two-week quarantines against the resilience of the Wildcats. The flawlessness of Danielle Williams’ perfect game and lacrosse’s 15-0 start against yet another double-digit game losing streak by the men’s basketball team, the third in the past three years. The status of a top-ten national university against the school’s decision to welcome back football in the fall, but not most underclassmen.

There’s another, more prominent duality that will define this year in NU athletics. Just months after NU saw the program at its very best, the department soon found itself enshrouded in a humiliating national controversy with the ill-fated nine-day tenure of Mike Polisky as athletic director.

On Dec. 28, 2020, Cats athletics reached a peak unlike any other in its history.

The inclusion of the men’s basketball program in the AP Top 25 that day gave the University the distinction of having both of its basketball programs, as well as its football team ranked in the top 25 of their respective sports. NU, already ranked No. 9 in the U.S. News and World Report, also finished the academic year with a conference record 349 All-Academic Big Ten honorees. Between the on-field and academic success of NU’s athletes and recent projects Welsh-Ryan Arena and Ryan Fieldhouse, it’s not hyperbole to say that this moment encapsulated the Cats’ peak as an athletic program.

NU’s football program reached the Big Ten Championship for the second time in three seasons and defeated Auburn in the Citrus Bowl. The victories racked up after the season, too, as two Cats alumni, offensive lineman Rashawn Slater and cornerback Greg Newsome II, were drafted in the first round of the 2021 NFL Draft. Eleven NU graduates are also headed to NFL training camps, and coach Pat Fitzgerald reportedly turned down interest from NFL teams, instead signing a 10-year contract to stay at the helm in Evanston.

Women’s basketball, an AP Top 25 mainstay the past two seasons, returned most of its lineup from the squad that shared the Big Ten regular season title in 2019-20. And men’s basketball toppled then-No. 4 Michigan State in their conference opener en route to a 3-0 start, igniting talk of a return to March Madness.

Even amid a global pandemic, NU athletics reached new heights in 2020-21 and proved its worth yet again as an undersized school competing with the giants of the Big Ten. When Jim Phillips announced his move to become the Atlantic Coastal Conference’s next commissioner, the vacancy looked to be one of the most attractive athletic director positions available.

The search became a nightmare.

2020-21 will also be remembered for another date — May 3, the day NU announced Polisky, deputy athletic director for external affairs, as Phillips’ successor.

An internal candidate with a track record of boosting the department’s sales and partnerships, Polisky may have seemed a safe choice to extend the Cats’ golden era and smooth an unsure transition. Well, if you set aside his involvements in multiple allegations at the time.

A federal lawsuit about sexual exploitation within the NU cheerleading program filed by Weinberg senior Hayden Richardson named Polisky as a defendant. A February investigation by The Daily also revealed that Polisky dismissed concerns of racism in the department, according to multiple sources.

The NU community responded to Polisky’s hiring with immediate backlash, from a campus-wide protest with over 200 attendees to letters from women faculty.

Instead of reversing course, the University doubled down on Polisky through the hire. NU filed a motion to dismiss the sexual harassment lawsuit. Coaches and University President Morton Schapiro affirmed Polisky’s character. And members of the athletic community released a letter in support of the new athletic director.

Polisky resigned after just nine days in office, saying he did not think he could lead the department effectively. The disastrous saga revealed the staggering disconnect between the decision makers and the student body. The hiring also exposed NU’s apparent prioritization of continuity and dollars over integrity, all on a national stage.

The powers that be revealed who mattered to them, and it turned out to be the stakeholders — not student-athletes themselves.

So what did we learn from the whirlwind of the last nine months in NU sports? The never-back-down attitude of the student-athletes, NU’s combination of academic and athletic success and the COVID-19 adaptability of the NCAA and its schools in the pursuit of competition (and revenue), for starters. And most importantly, how deeply NU’s student body and faculty care about having the athletic program run the right way.

The more pressing question will be the one answered in the coming months as the University searches for a new athletic director: what did NU learn?

Related Stories:
— Schapiro discusses Polisky resignation in Faculty Assembly meeting
— Northwestern community members react to Mike Polisky’s AD resignation
— Games or not, this fall will be the the most important in NCAA history