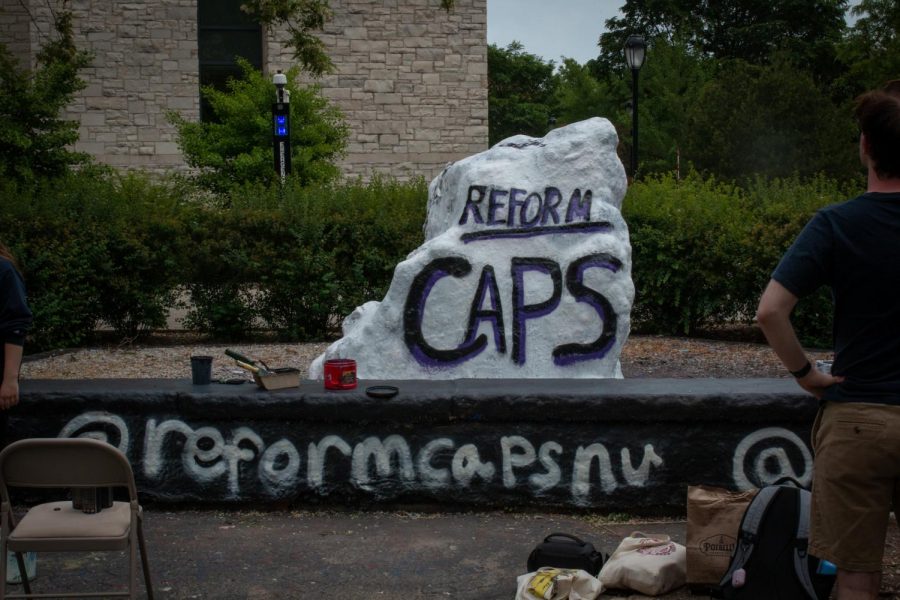 Attendees spray-painted their new organization’s title and catchphrase “Reform CAPS” on the Rock.

A group of Northwestern students gathered to paint the Rock during a Monday rally to advocate for improved mental health support.

The participants spray-painted the organization’s title and catchphrase “Reform CAPS” on the Rock, referring to Counseling and Psychological Services. The surrounding wall displays the group’s Instagram handle @reformcapsnu and from a birds-eye-view reads “We deserve better. Support our students.”

Established in late April, Reform CAPS called for a reduction of average wait times to three days and the hiring of diverse clinical staff. The group’s five major demands also ask that CAPS releases student experience data and policy procedures along with creating an accountability board.

CAPS is NU’s primary university-sponsored mental health care for graduate and undergraduate students but does not make information such as wait times or budget publicly available.

A Communication sophomore who co-organized the event said CAPS’ current operations are falling short of student needs. They requested anonymity for privacy and safety reasons.

“CAPS isn’t out here painting the Rock or talking to students on a daily basis. They don’t have that ground-level sort of support in students,” the sophomore said. “That’s really the goal of this — to build (support).”

They said students with marginalized identities in particular are underserved, even as they experience increased mental health concerns. The current staff at CAPS do not reflect this need, they said, while more financially well-off students may have better access to resources. Some of the positive testimonies on the group’s Instagram page may reflect this, they said.

New CAPS Executive Director Garrett Gilmer told The Daily in February that he understands the emotional and institutional barriers that gatekept students of marginalized identities from receiving affirming mental healthcare.

A SESP freshman and co-organizer, who asked to remain anonymous for privacy reasons, said it is particularly harmful when students reach out to CAPS and receive little information about when they will get help. Individuals seeking assistance are in a vulnerable place when they turn to CAPS, but she said she feels as though the institution treats students in need like liabilities rather than prioritizing their care.

“I had an experience with a friend of mine, where we reached out to CAPS multiple times (and didn’t get an appointment),” she said, “and this person ended up in the hospital.”

Reform CAPS took inspiration from a similar movement at one of NU’s peer institutions, whose efforts ended in a reduced average wait time of under three days, the freshman said. Reform CAPS currently does not have access to wait time information, but from her experience, she said it often takes over a month to hear back from CAPS.

However, she emphasized that CAPS is understaffed and under-supported, adding that the administration needs to work for reform, not overburden the already-overworked CAPS employees.

“I know that (CAPS employees) are trying, and I know that they probably have limited resources,” she said. “It’s probably really hard to work within that institution and not be able to help students effectively.”

McCormick and Communication sophomore Sahibzada Mayed said Reform CAPS reached out to him following his bid for presidency in Associated Student Government.

Since then, Mayed said he has spoken with organizers on how to advocate for student mental health. Part of his motivation has stemmed from his own struggles with mental health while at NU, he said.

“The University really needs to actually acknowledge that CAPS is good, but CAPS could be better,” he said. “We need that awareness at the administration level as well and mobilize how (we can) improve it and actually take action.”

While he acknowledges some students have had good experiences with CAPS, Mayed said there needs to be increased awareness that it has done a lot of harm to others as well.

The anonymous Communication sophomore said Reform CAPS ultimately decided to go ahead with the painting and that the organization as a whole supports Palestinian human rights.

Even though the initiative pushes for palpable reforms, the sophomore said it is also about building long-standing student communities and awareness around mental health.

“They can say, ‘Oh, we’ll wait four years — you’ll be out of here,’” they said. “I want to build these communities of support that will last and not rely on institutions to provide that, because as much as they can, as much as they want to, I can’t rely on that. I don’t feel that I can and that alone speaks volumes.”