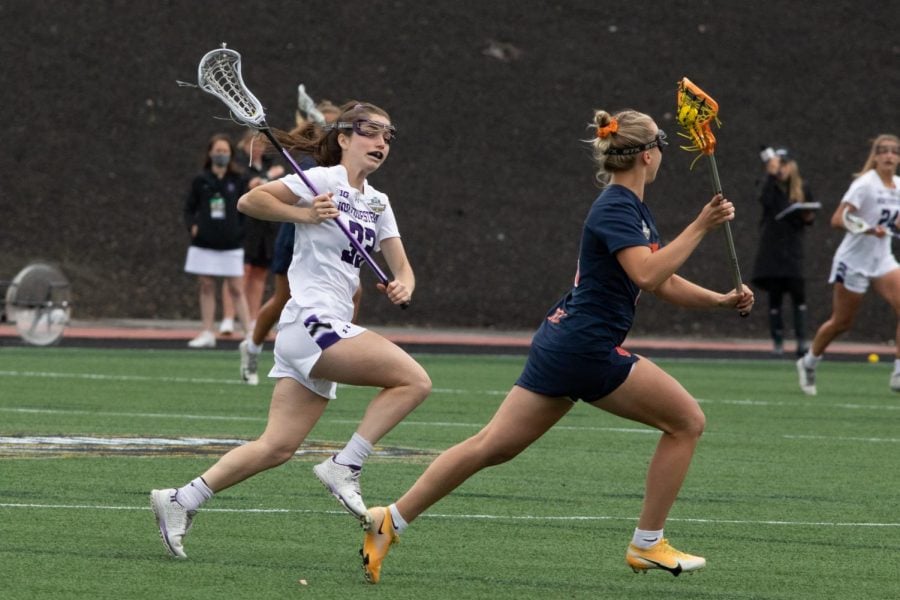 But that offensive strength couldn’t save the Wildcats (15-1, 13-0 Big Ten) from defensive troubles in the Final Four.

NU struggled early on in Friday’s Final Four matchup against Syracuse, facing a 10-4 deficit at halftime — largely because of fouls.

The Cats received three yellow cards and committed 26 fouls to Syracuse’s 12 at the half. By the end of the semifinal matchup, NU had committed 49 fouls and received seven yellow cards in addition to a green card.  In comparison, the Cats only fouled Denver nine times in the second round of the NCAA Tournament and tallied just 21 against Duke in the NCAA Quarterfinals.

Coach Kelly Amonte Hiller said she plans to rewatch the game and re-examine the fouls. Regardless, she said NU got in its own way on Friday.

“You can’t go into a game like that and serve penalties the whole time,” Amonte Hiller said. “It’s impossible to overcome.”

The Cats also trailed on the draw throughout most of the matchup, finishing with 14 draw controls to the Orange’s 19. As Syracuse won the draw, it provided them more offensive opportunities and forced the Cats to defense.

Amonte Hiller said the combination of struggles on the circle and yellow cards were key in allowing Syracuse to capitalize offensively early on and kept NU from staging a comeback.

Junior goalkeeper Madison Doucette anchored the Cats’ defense in her second season as a starter, supported by senior defender and Tewaaraton nominee Ally Palermo. Palermo was typically the only true defender listed on the starting lineup, working with several midfielders who would take turns switching between midfield and defense.

Emma Ward fires one in!!!

While the Cats’ defense struggled, the Orange excelled. Syracuse held NU to just 13 goals — the Cats’ lowest output all season. The Orange also held junior attacker Izzy Scane, who leads the country with 6.12 goals per game, to just four goals in the matchup. Senior attacker Lauren Gilbert, who ranks 11th in the country in goals per game, only notched two goals as well.

“Our defense was dialed in, and it was a team effort,” Gait said. “It wasn’t a shut-off, it wasn’t a face guard, it was just great team defense and that’s what we pride ourselves on.”

Although Syracuse’s entire defensive unit played strongly, graduate student goalkeeper Asa Goldstock played a prominent role on Friday. She recorded 10 saves on 23 shots, including a big stop just as the Cats narrowed the lead to three in the second half.

Scane called the Orange’s defense “high pressure,” saying that it caused the NU offense to play “a little scared.”

“If we had played completely our game, it would’ve been a little different,” Scane said. “Syracuse did what they were trying to do in terms of messing with our offense… Overall, it was not our best day and it’s not a great time to not have our best day.”

— Lacrosse: How Izzy Scane went from the backyards of Michigan to front and center in the Big Ten