Lacrosse: In first season loss, No. 2 Northwestern falls to No. 3 Syracuse in Final Four 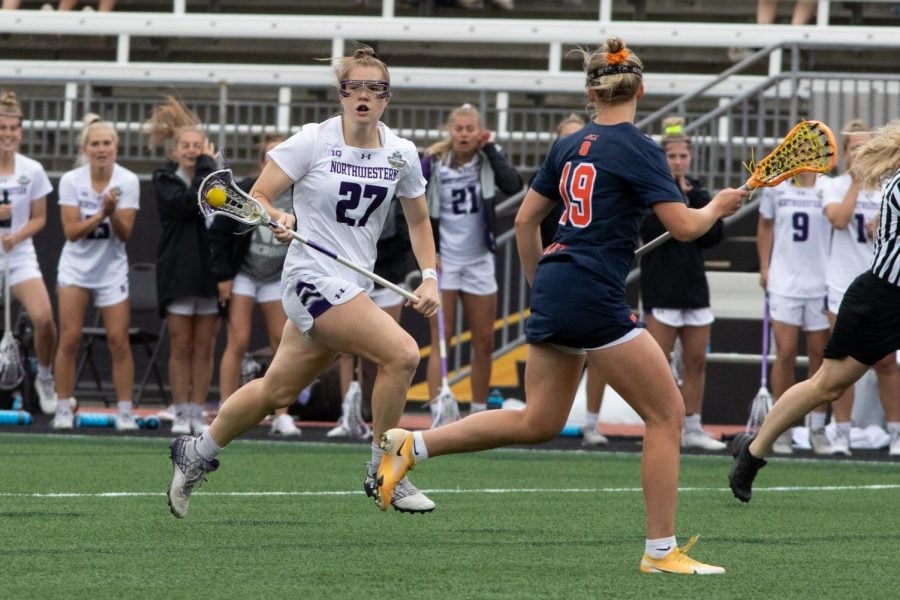 Junior attacker Izzy Scane runs down the field. She was Northwestern’s leading scorer during the Final Four with four goals.

TOWSON, Md. — After a tumultuous battle inside the draw circle, graduate student attacker Lindsey McKone found the ball and fired a shot that flew into the net to give Northwestern an early first half 1-0 lead.

It would mark the Wildcats’ only lead in the Final Four game.

“It’s obviously not the outcome we were looking for, but I’m super proud of our team,” said junior attacker Izzy Scane, who was the team’s leading scorer Friday. “Sometimes things don’t pan out how you’re hoping they would, but I think we did a lot and all grew as a program collectively.”

Following McKone’s goal in the first minute, NU continued its momentum with another draw control to bring the ball to their offensive zone. However, the pace halted when senior attacker Lauren Gilbert received a yellow card for a dangerous shot. Within minutes, senior midfielder Jill Girardi was issued a penalty, shrinking the squad by two players.

The early deficit allowed Orange junior attacker Meaghan Tyrell to score a goal on a free position attempt. Tyrell ended up being a key contributor to Syracuse’s offense on Friday, scoring 5 goals and making 3 assists.

Once the Orange scored, they went on a run that NU could hardly stop. Outshot by Syracuse 41-30, NU’s offense — which leads the nation in goals per game — appeared flustered and trailed by seven goals multiple times during the game.

At the beginning of the second half, the Cats tried to fight back and cut the lead down to only five goals. But, their quick run was short lived, as the team would scramble to stop a high scoring Orange offense that went on to score another goal.

With fourteen minutes remaining, NU’s offense kicked into high gear by going on a four goal run to trim Syracuse’s lead to three. However, the Orange responded with three goals of their own.

Coach Kelly Amonte Hiller was critical of the team’s fouls and poor shot placement in both halves.

“Syracuse stepped up and did an amazing job today,” Amonte Hiller said. “They were ready, and that’s why they won the game.”

Scane said she was optimistic about next season, since the team is young. The Cats will lose McKone and graduate student attacker Sammy Mueller, but Gilbert and Girardi could claim their fifth year of eligibility for one more season.

Only a junior, Scane hopes to win a championship next season and set new program records similar to her successful 2021 season. The Tewaaraton finalist ended the season with 98 goals which led to NU’s 15-1 record.

“We’re losing a couple of amazing players and we’re definitely going to feel the loss, just personnel-wise,” Scane said. “But, we do have a pretty young team and I think next year we’ll be back swinging.”

— Lacrosse: No. 2 Northwestern to face No. 3 Syracuse in NCAA semifinals