The Daily Northwestern • May 28, 2021 • https://dailynorthwestern.com/2021/05/28/campus/caregiver-faculty-students-reflect-on-university-childcare-aid-voice-concerns-around-return-to-in-person-work/ 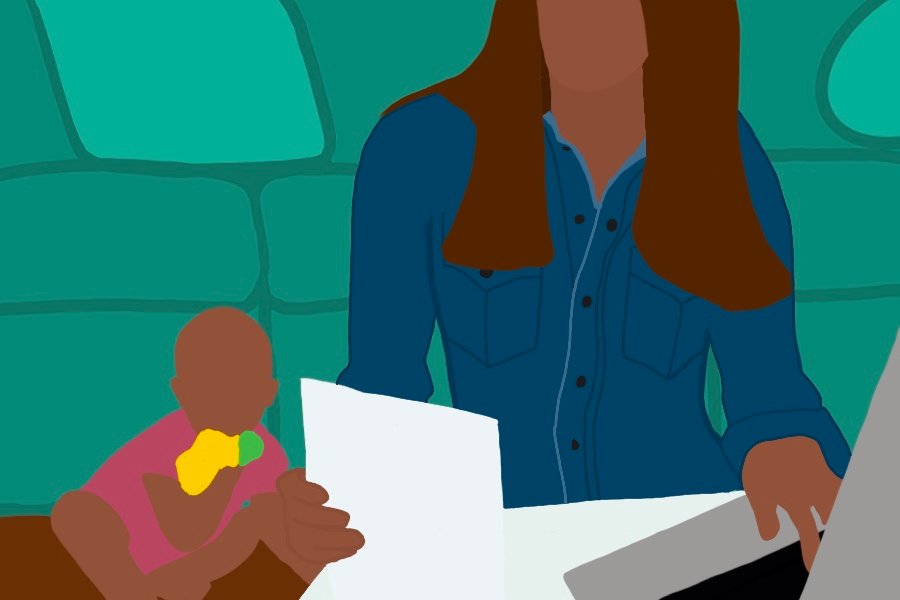 While Northwestern has provided an emergency childcare grant to caregivers during the pandemic, faculty and students say the aid effort has been largely inadequate.

For much of the past year, Asian American and African American Studies Prof. Nitasha Tamar Sharma said she felt like she failed her son.

While her daughter has managed to independently finish fourth and most of fifth grade on Zoom, Sharma’s kindergartener son has struggled with isolation and remote learning. As a professor, director of African American Graduate Studies and caretaker for her mother during the pandemic, Sharma said trying to balance her many responsibilities with homeschooling has felt “impossible.”

“Imagine trying to get a kindergartner and a first grader to learn how to become computer literate,” Sharma said. “I don’t know how people expect that we continue to do this — the problem is that we have continued to do our work and do it pretty well, (and) it’s just that our children and we have suffered.”

Northwestern has offered pandemic emergency childcare grants, and some department heads have allowed professors a one-course reduction. However, Sharma said pandemic accommodations of faculty and students who are caregivers, particularly women, has been “dismal.”

Sharma said the University has not recognized how unsustainable most caregivers’ living and working situation has been since last March.

Ph.D. student Nikki McDaid, a single parent who has two elementary school-aged children, also said they have felt unsupported by NU in continuing work through the pandemic.

“I am a mother trying to feed my children,” McDaid said. “I feel like…upper administrators do not realize that many, many graduate students are 30-somethings who are parents — and many of us single or divorced -— with little support as we temporarily live in Chicago or Evanston for grad school.”

Some faculty members, particularly women professors, have rallied for increased support for caregivers. Last summer, history Profs. Amy Stanley and Susan Pearson co-authored a letter calling for the University to standardize its pandemic-relief policies for faculty and staff who are caregivers.

The letter, which amassed over 240 signatures as of July 19, 2020, laid out several ways for NU to support caregivers, including a University-wide teaching load reduction, an extended parental leave policy and a reassignment of fall course loads to Winter or Spring Quarter.

“The difference between remote and on-site work is only where it takes place: the total amount of work is unchanged, or even expanded, when it is performed outside the office,” the letter stated. “Thus the option for remote work does not solve the problem of working full-time while also shouldering more caretaking.”

The University did not formally respond to the letter, Stanley said.

A blanket one-year extension on tenure consideration for all associate professors was the only tangibly helpful action the University took after the letter was issued, she added.

“That letter was a complete failure — we never got a satisfactory response,” Stanley said. “We were all reduced to negotiating one-on-one with our department chair to figure out what accommodations could be reached for people in our situation.”

While she was able to gain a one-course reduction during Winter Quarter from the History Department chair, Stanley said junior and associate professors on the tenure track may be more reluctant to approach their chairs with such requests.

Pearson was also able to secure a course reduction, but the inconsistency of the process across departments exasperates existing inequities, she said.

“Having things be so decentralized and discretionary means that some people will end up with accommodations and other people can’t get for whatever reason — their departments are too small, they don’t have a good relationship with their chairperson, they’re afraid to ask,” Pearson said.

Along with teaching, most professors also have service and research responsibilities. Sharma said the past year has coincided with the most service work she has ever had.

Her one-course reduction from the African American Studies department did little to ease her workload, she added.

“The University doesn’t feel the tension and the manifold obligations that we have because we are used to juggling them,” Sharma said, “but I think it comes at a great cost — this is going to be with us for a very long time, and we’re all very traumatized.”

When asked how NU has worked to address faculty caregiving concerns during the pandemic, the University citied its Temporary COVID-19 Caregiving Grant and the Sitters and Tutors Network as available resources.

Launched in January, the Temporary Grant offers up to $1,500 to subsidize childcare for people working or attending NU full-time. The Sitters and Tutors Network matches faculty, staff and student parents with NU students interested in caregiving jobs.

Pearson said while she applied for and received a temporary grant this quarter, the money alone would have been of little use earlier in the pandemic.

“Particularly earlier on, it was actually very difficult to find childcare for all the reasons that schools were closed,” Pearson said. “Before vaccinations became available, there were still lots of people who couldn’t avail themselves of non-familial sources of (childcare) for fear of spreading COVID.”

Additionally, Pearson said the quarterly cost of childcare for her nine- and thirteen-year old children far exceeds the $1000 grant she received. In a statement to The Daily, the University said it is currently looking into extending the grant through the summer.

McDaid applied for and received a standard quarterly childcare grant from The Graduate School, but said the money was of little use during the pandemic, when Residential Services’ policy prohibiting outside visitors in graduate-student housing prevented them from hiring a babysitter.

Outside guests are only allowed in common areas of graduate student apartments and cannot enter any areas with residents’ sleeping rooms.

“Perhaps they will relax the policies… but even if they do, I cannot easily afford childcare for my kids even with the really small amount of money they offer for the childcare grant,” McDaid said. “The amount they give for one quarter doesn’t even cover a week of daycare for my kids.”

Ph.D. student Jessica Marshall, who has three children under 10 years old, also received a TGS grant, but it only subsidized care costs for up to two children.

Marshall has applied for the TGS grant twice before, she added, but was denied because her household’s income exceeds the eligibility threshold. It was only when she wrote to TGS explaining that parenting three children full-time through the pandemic was unsustainable that TGS made an exception and gave her the grant for the 2020-21 school year, Marshall said.

While her professors and colleagues have been understanding of her parenting responsibilities during the pandemic, monetary support from the University is what she needs most, Marshall said.

“The flexibility is greatly appreciated, the moral support, not requiring that I be at daytime meetings when I have my kids, or making meeting times available at night,” Marshall said, “but at the end of the day… I need somebody with my kids.”

But even if schools return to in-person and the University relaxes its pandemic restrictions, Stanley said the University still has a ways to go in supporting caregivers.

“The University’s policy toward caregivers has never been adequate,” Stanley said. “It was already really impossible to be on the tenure track with babies. I did it, and it was awful and barely doable.”

Caregiver students and professors have lost a year and a half of work-time to their responsibilities at home, Stanley said, and are still expected to “pick up and move on” like their non-caregiver, often male colleagues.

NU has fallen behind its peer institutions in this regard, Stanley claimed. Yale University offered a guaranteed 30 days of emergency daycare for caregivers, and Stanford University has offered on-campus childcare through the pandemic.

“The University’s policy toward all caregiving problems is basically, ‘This is not the institution’s problem, this is your individual problem, and we don’t have to do anything about it,’” Stanley said. “I don’t know how the university is going to remedy that going forward but they’re going to have to, if they don’t want to lose a generation of women scholars.”

Along with the demands laid out in last year’s letter, Pearson said the University could revisit its policy around faculty leave of absence and allow flexibility for those who need to catch up on time lost during the pandemic.

The University’s lacking accommodations for caregivers are indicative of a “system-wide failure” during the pandemic, Pearson added.

“Women dropped out of the labor force in unprecedented percentages (during the pandemic), and it’s shown us how much our society depends on the labor of women,” Pearson said. “Employers of all kinds, including universities, need to also think about their employees as people who have larger social responsibilities that include caregiving.”