The Daily Northwestern • May 27, 2021 • https://dailynorthwestern.com/2021/05/27/campus/in-asg-session-attended-by-over-200-senate-passes-resolution-supporting-palestinian-human-rights/ 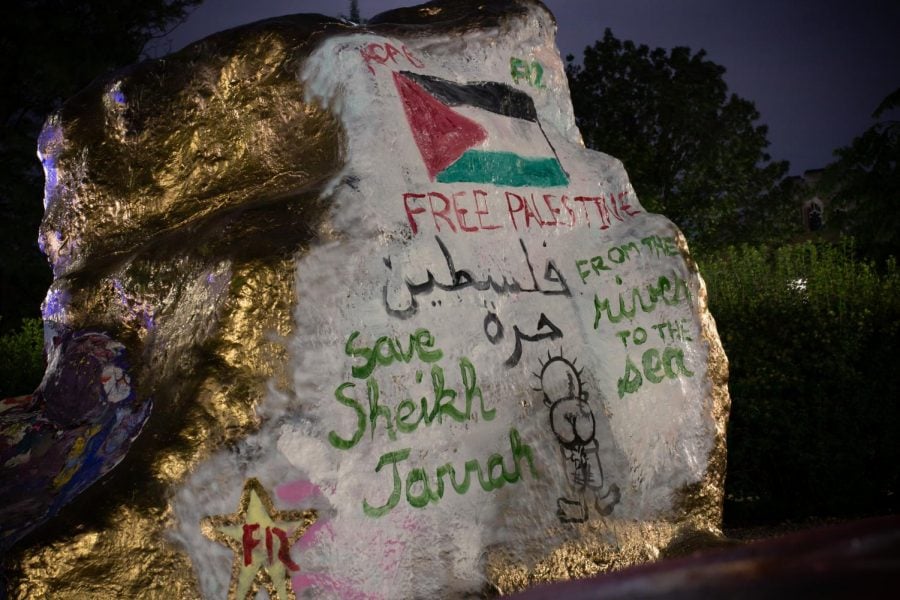 The Rock painted following the passage of the resolution. ASG voted to support Palestinian human rights.

The “Resolution Concerning the Response to the Israeli Occupation of Palestine” passed in a roll call vote of 20-2, with nay votes from Northwestern College Republicans and Hillel senators. A Weinberg senator abstained from the vote.

“Regardless of religious or political views, the current Israeli-Palestinian conflict cannot be discussed without centering the humanitarian crisis that is going on as a result of the Israeli occupation of the West Bank and blockade of Gaza,” the resolution stated.

The petition, authored by an ASG senator, garnered over 300 student co-sponsors. The legislation focused on the Israeli-Palestinian conflict as a human rights issue.

Speaker of the Senate and Weinberg freshman Dylan Jost said this week’s session was very different than usual. Meetings typically have 30 to 40 people and last an hour at most. Wednesday’s session saw over 220 attendees and lasted four hours, with about half spent discussing the resolution.

“People were very passionate about this issue, and this resolution concerning Palestine,” Jost said. “So it’s something where a lot of people want to speak and that has complicated facilitating the discussions.”

The resolution has three points: ASG’s majority support of Palestinian human rights, demands that the University issue a solidarity statement and calls for NU to divest from six companies that have aided Israel’s aggression toward Palestinians. This call for divestment narrowly passed in a 2015 ASG resolution.

Last week, University President Morton Schapiro told The Daily he chose not to release a statement of solidarity about the violence in Israel and Palestine because he couldn’t unilaterally condemn Israel’s actions. He added that extremism on both sides is “absolutely horrific.”

“Northwestern as an institution unequivocally rejects BDS,” Schapiro said in a 2019 statement. “To the contrary, we value our many relationships with a variety of universities and research centers in Israel.”

The Senate passed an amendment to Wednesday’s resolution to reference Israel’s actions as “genocide.”

The resolution includes a clause denouncing antisemitism, stating that “criticism of Israeli occupation does not equate to antisemitism.” However, some students still opposed the resolution, stating it used antisemitic language.

However, an anonymous Palestinian student in attendance said that the discussion around amending the language in the bill was not productive.

“For the whole time, there were people speaking up against the statement, but when we asked them to give us the amendments that they wanted to see, they had no amendments to give,” he said. “It felt like they were just trying to silence the Palestinian voices, and the Palestinian struggle.”

In the meeting, some students said they support the resolution’s goal, but the wording in the document, like “Zionist settler-colonialism,” is antisemitic. Hillel’s student executive board released a statement after the meeting calling the resolution divisive and said dialogue on amendments to the resolution was not a “good-faith attempt” to include Jewish perspectives.

“Hillel condemns all hateful messaging targeting students, regardless of their position on the ASG resolution or Israeli-Palestinian conflict,” the statement read. “No one should feel personally attacked for their views.”

During the meeting, attendees sent hundreds of messages through the chat function in support or opposition of the resolution.

Representatives from Wildcats for Israel opposed the amendment outright. They said boycotting, divesting from and sanctioning Israel is antisemitic because of the ties between Jewish people and Israel.

Following the passage of the legislation, those in support headed to The Rock, painting words like “Free Palestine” and “save Sheikh Jarrah” on the surface.

After the meeting ended, the author of the resolution told The Daily they were grateful for the students with marginalized identities who spread awareness of the legislation ahead of the meeting.

“Support from students of color and students from all kinds of marginalized identities — in the end, that’s what really helped this through,” they said. “And I think in the end we know that Palestinian liberation is intertwined with all different kinds of liberation of oppressed peoples.”

This story has been updated.