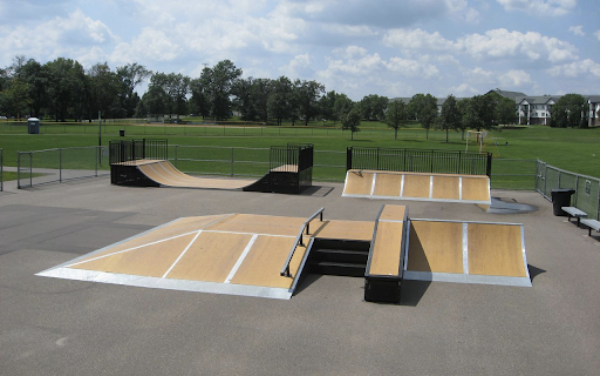 When 2000s pop icon Avril Lavigne penned her hit single “Sk8er Boi,” she was looking ahead to Evanston’s future.

Residents gathered Tuesday to discuss logistics for installing a new skate park in the city during a second public discussion on the matter. Previous plans to reinstall the skate park formerly located at the Robert Crown Community Center were ultimately discontinued because the equipment, composed of manufactured wood, degraded and was not replaced.

Stefanie Levine, a senior project manager with the Evanston Public Works Agency, said her team is hoping to build a temporary skate park that would last about three to four years. She said they hope to build this park within the calendar year for residents to use while the city continues to plan for a more permanent, long-term location.

“We want to make sure the design appeals to a wide variety of users and skate styles because it’s not just about skateboarding,” Levine said. “There’s BMX (bicycles), scooters and inline skaters that we need to think about.”

Although organizers have planned meticulously about the equipment the long-term skate park would need, many community members are still concerned with whether there is enough funding to ensure the installation will be a permanent part of the city.

Nate Kipnis is a member of Evanston Skates, a community coalition advocating for skate parks in Evanston. He said he believes the team should do more outreach to organizations that can provide additional funding, citing The Skate Park Project as a potential organization.

“I would’ve liked to see much more engagement with the committee and Tony Hawk’s skate park foundation right from the beginning,” Kipnis said. “I think this could be a key factor that can help us get some more money for the skate park.”

The team said it is open to any feedback regarding the type of flooring used, equipment available at the skate park and the park’s permanent location. Members of the project plan to meet with members of Evanston Skates to gain a different perspective on what should be taken into consideration.

“We want to come together and try to make this something that the community will use, and not just so we can check the box,” Hemingway said. “That’s not why we’re here, we want to make it the right way.”