The Daily Northwestern • May 25, 2021 • https://dailynorthwestern.com/2021/05/25/lateststories/evanston-made-to-showcase-local-artists-in-annual-art-exhibit/

Evanston Made to showcase local artists in annual art exhibit 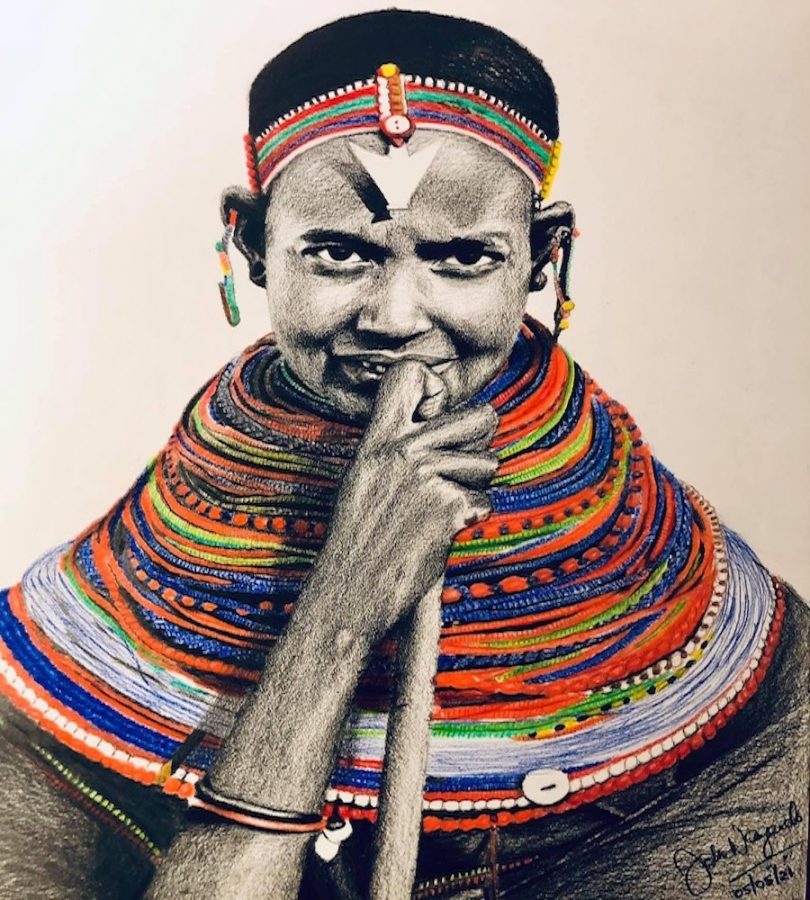 A pencil drawing by John Wangendo entitled “Maasai Girl in Traditional Beadwork.” Wangendo is one of the many artists featured in Evanston Made’s upcoming Annual Members Group Show.

The in-person exhibit will take place from May 28 to June 30 at the Evanston Art Center. Visitors must wear masks, take their temperature and social distance throughout the exhibit, according to the Evanston Made website.

John Wangendo, one of the featured artists, will exhibit a pencil drawing in the show. He never trained as an artist but said he picked up drawing as a hobby during the pandemic. After posting one portrait on Facebook, he said “it just went wild.”

“One thing led to the other, and the next thing I knew, I was at the pop-up gallery in downtown Evanston,” he said. “That’s when I realized there was something there.”

Wangendo started by drawing portraits of friends and family but soon began drawing famous Black figures in American history like the Obamas and Martin Luther King Jr. He then decided he wanted to make art about his own community.

Wangendo, a Kenyan immigrant, submitted a drawing to the show that depicts a Kenyan bride.

“I want to educate Americans about my people from Kenya,” Wangendo said. “I’m trying to explain about the people of Kenya through my artwork.”

Bonnie Glassner, another featured artist, said she likes working with alcohol inks. The medium is tricky to work with, she said, because the colors often flow and mix together. But, over the years, she has learned to control her inks.

“They’re fun to paint with,” Glassner said. “It’s not like watercolor — it’s very vibrant. It depends on how much vibrancy you want, but you can control that.”

Glassner said she focuses on representational painting rather than realistic painting. Her piece in the exhibit depicts nature and is based on a photograph. She used her interpretation to add her own spin to the piece.

Yancey Hughes said he submitted a photograph he took on his cell phone. He primarily takes portraits, headshots and slices of life, but he said the photo he submitted shows how a phone can serve as a photographer’s best camera.

Hughes said he has always enjoyed the instant gratification that comes with photography. The ability to instantly send high quality images to editors impresses him, he said.

“Technology has come quite a long way,” Hughes said. “I love to be able to be on the street and to be able to capture the slice of life as it unfolds right in front of you, not having that second chance to capture it.”

The inspiration behind Hughes’ photography comes from many street photographers whom he looks up to, he said.

But most of all, he said he enjoys being able to express himself through his art.

“Photography is a visual language that I’m still learning,” he said. “Our visual literacy is pushed by innovation. I strive to see better, to communicate better, as I look at the ever-changing world around me.”