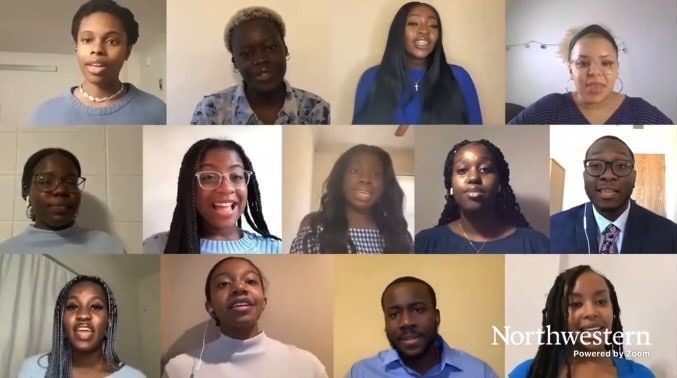 Members of the Northwestern Community Ensemble perform at their 50th anniversary concert.

In 1971, three students performed at a Northwestern student’s fundraiser for a legal defense fund. Northwestern Community Ensemble held a virtual concert celebration on May 8 to celebrate exactly 50 years since the club’s founding.

Running the choir “isn’t easy,” NCE Vice President Claudia Kalisa said, so she was thankful for the students and alumni who have put in the work needed over the years to keep the organization alive.

“This 50th anniversary was just (about) gratitude and acknowledging the people, the founders of NCE who basically set this path for us,” the McCormick senior said. “And acknowledging the work that they did, especially in the White climate that was the campus on campus at that time.”

Weinberg sophomore and choir co-director Emmanuel-David “E-D” Tadese said throughout the year, current choir members have connected with NCE alumni from all five decades it has been around. Tadese said alumni have shared the challenges of officially establishing the ensemble on campus.

Tadese said they also praised NCE’s current members for honoring the choir’s history. He said he felt reassured by their compliments and the amount of people who showed up virtually for the performance.

“For people to continue to build on what we’ve done over the past 50 years and to be a part of this huge celebration where we have literally hundreds of people across the decades coming to celebrate with us — it means a lot,” Tadese said.

Tadese praised the efforts of NCE President Cleon Beckford for keeping the organization alive throughout the pandemic. He said Beckford’s contributions made the concert possible.

Choir co-chair and Weinberg junior Sarah Davis said the virtual concert, although presented in a different manner than previous years, followed old traditions, featuring both the choir and guest artist. The Zoom call displayed pre-recorded videos edited together live to an audience of over 300.

As the choir returns to in-person rehearsals and events, Davis hopes the group will grow and continue to be an environment where people celebrate, amid tough times, the good that has still been present throughout the pandemic.

Davis said the organization serves a clear purpose on campus and gives a community to people who need it.

“Even before we had funding, before we had a lot of the resources that we have now, people were able to gather and come into community,” Davis said. “It was really filling a need on campus because it was able to persist over these 50 years.”