The Daily Northwestern • May 23, 2021 • https://dailynorthwestern.com/2021/05/23/city/west-end-garden-seeks-to-bring-justice-focused-community-gardening-to-evanston/ 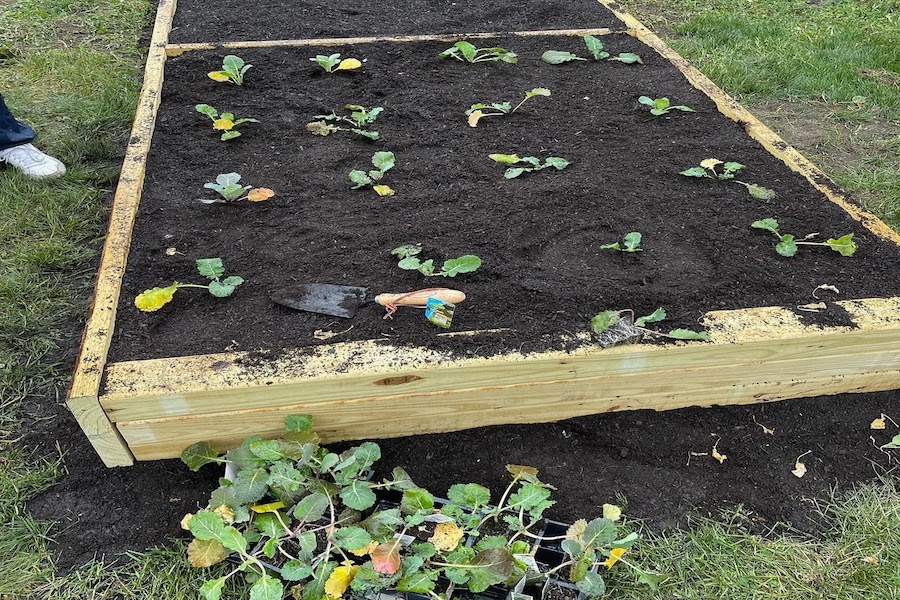 Courtesy of the West End Garden

Organizers said they want the garden to be both a joyful community space and a center for education and activism around issues of racial justice, food accessibility and sustainability.  Volunteers and organizers built raised beds at an event on May 15 and plan to plant produce and native wildflowers at an upcoming “Grow Day” on May 29.

Barreto said gardening can be a therapeutic way to address the complex historical relationships between agriculture and Black Americans, but she thinks it can also become a source of community bonding and empowerment.

At a Citizens’ Greener Evanston event in April, EFBL organizer Maia Robinson said the garden can address that history while helping the community.

“Historically, the environment has been used as a tool to oppress us,” Robinson said, referencing racial injustices like slavery and sharecropping. “Now, we’re looking at a way that we can understand that history while also relearning the ways that we can use the environment to our own benefit.”

In the long-term, Barreto said organizers hope to launch a mentorship program focused on agricultural education.

Once the garden is up and running in the coming weeks, they also plan on hosting workshops to educate community members about gardening techniques they can use at home or in agricultural careers.

“It’s really powerful to be able to start a garden in your own backyard and not have to depend on grocery stores that are… kind of far (from your home),” Barreto said.

This independence is necessary in some parts of Evanston. According to 2015 census data from the U.S. Department of Agriculture, residents in four of the 18 census tracts in the 1st, 5th, 7th and 8th Wards in Evanston do not have access to a supermarket within half a mile of their residence. Barreto said inaccessibility can make grocery shopping especially difficult for people who don’t own vehicles.

On top of workshops and mentorship programs, organizers hope to give away produce grown at the West End Garden to combat food insecurity.

Sustainability is also an important part of organizers’ vision. Barreto said they plan to plant native wildflowers in the garden to support pollinator species. Native plants can mitigate climate change by absorbing atmospheric carbon dioxide, while pollinators, which have suffered species loss in recent years, can play key roles in supporting ecological stability.

Semillas y Raíces, a community garden located on the West Side of Chicago, uses gardening to create spaces for Indigenous agricultural practices, as well as focusing on social justice and local community.

Tomas Ramirez, an organizer at Semillas, said the garden’s goal is to build a sustainable community where people are “in right relationship” with nature, their cultural background and their peers.

Organizers sometimes refer to Semillas as “the glass garden,” since the soil was littered with broken glass and litter when they started planting several years ago. Since then, they’ve cleaned the space and built up healthy, organic soil that can support produce, mushrooms and herbs.

“It’s a huge restoration project on that end,” Colon said. “(We’re) building back up that soil and bringing in our culture.”

Sam Arechiga, an organizer and student at DePaul University, said the events held at Semillas are central to its overall mission of building community through Indigenous practices.

In addition to gardening, Semillas hosts restorative justice circles where community members can talk through conflicts and violence, as well as barbecues, Indigenous ceremonies and workshops focused on traditional cooking techniques.

“I’m from the Southwest, so finding this space was really important to me, because it felt like I had so many people that I could relate to in such a huge city,” Arechiga said. “It’s just a really beautiful thing to be part of such an inclusive and intergenerational space.”

In Englewood, not far from Semillas, an urban farm called Growing Home is planning to launch its own community garden in June.

LaQuandra Fair, the community engagement coordinator at Growing Home, said families who sign up for garden space will be given seedlings, tools and any support they need to start their own garden. Fair said the community garden will address food inaccessibility in the neighborhood.

“Everyone deserves a good job and good food,” Fair said, “and this is part of that — making sure that folks have… a space to grow their own groceries.”

“We just really want to empower folks with the tools and the knowledge that we have,” Fair said.

— Organizers look to rebuild after EFBL community fridge is destroyed