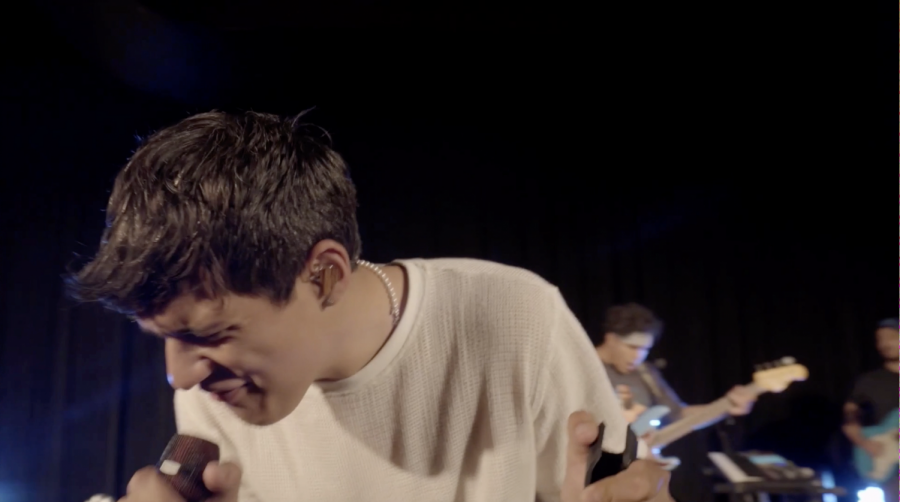 From “Kamikaze” to “Stayback,” Apollo played various tracks from his 2020 album “Apolonio.” During the hour-long set, he also threw it back with “Ugotme” from his inaugural record “Stereo,” which released in 2018.

Apollo, a queer Latinx artist, performed songs that served as an homage to his identity.

“About to get into some real Mexican sh-t,” Apollo said while introducing “Dos Uno Nueve (219),” a song from “Apolonio.” “Shoutout to all my Latinos out there.”

He also played his song “Bi Fren,” commonly cited as a double entendre: both a farewell to a friend and a nod to his own sexuality.

Mayfest’s Booking Director Amirah Ford said another nice touch was that Apollo, an Indiana native, hails from the Midwest. Besides the fact he’s “beloved on campus,” Ford added Apollo’s natural talent and full dance set meant he could hold his own in a virtual space.

This year’s Dillo was the first lineup that exclusively featured artists of color. Beyond that, Apollo was Dillo’s first Latinx daytime headliner, Ford said.

“Omar Apollo came about (from) again, a lack of diversity in past years, a lack of people of color all around on the lineups — predominantly the Latinx community,” Ford said. “Having a visibility of some type of queerness is something that has not been acknowledged or prioritized or even considered much before.”

Ford is the first Black person to hold the title of director of booking, and she said her first-hand life experiences give her the “cultural intelligence” to cultivate a group of artists that recenter diversity.

“That’s the only reason why past lineups, past spaces, past environments have not been diverse or inclusive,” Ford said. “In this position, and having a seat at the table, I made it very clear that I want to apply pressure and do something new.”

Weinberg freshman Mimi Hansen-Erraziqi said she found out about Apollo through pop artist Ruel, who is featured on Apollo’s song “Want U Around.” After clicking through his tracks, she said she added some to her playlists and especially liked “Want U Around.”

However, Apollo’s Dillo set had Hansen-Erraziqi hooked on his body of work at-large, she said.

“Some of his songs have really high notes and harmonies, and he actually did quite a few of them. (It was a) very soothing experience,” Hansen-Erraziqi said. “After watching his set, I’m 100 percent going back and listening (and) learning his songs.”