Lacrosse: No. 2 Cats to square off against No. 7 Duke in Elite Eight 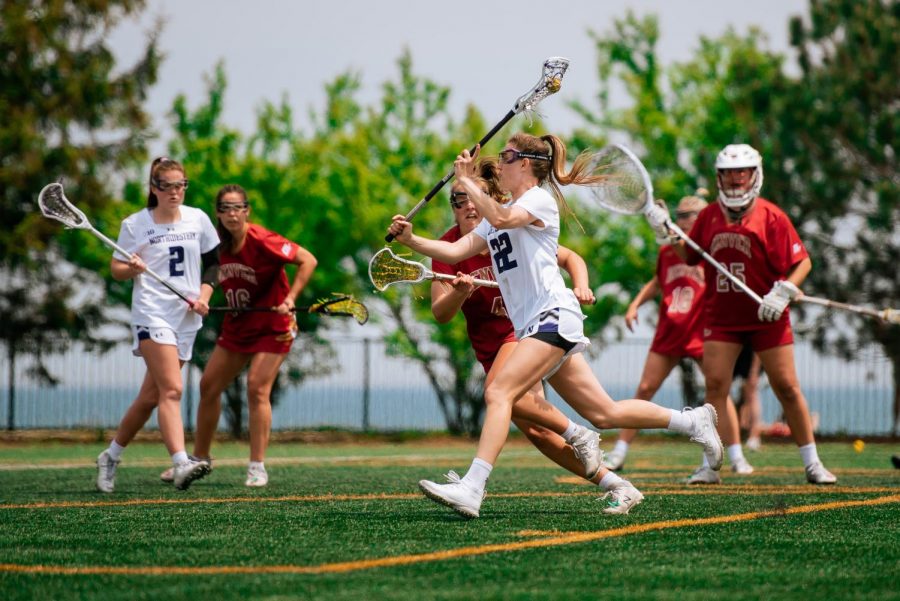 After a dominant Sweet Sixteen win over Denver, No. 2 Northwestern will take on No. 7 Duke Saturday at Lanny and Sharon Martin Stadium, marking the teams’ first matchup this season.

But the Wildcats are no strangers to this Blue Devils’ squad, having defeated them in its last contest at Ryan Fieldhouse in 2019. Despite playing them only “perennially,” coach Kelly Amonte Hiller said she is very “familiar” with Duke.

“I know a lot of their weapons, including a strong transfer from (University of Pennsylvania),” Amonte Hiller said. “We’ll be very excited to host them and play against a very strong opponent.”

Outside of the history between the two coaches, Amonte Hiller knows Duke junior attacker Maddie Jenner, who played under her for the U19 USA lacrosse team that became world champions in 2019. The attacker specializes in draw controls, collecting 180 draws in the season thus far.

However, senior defender Jill Girardi is poised for the challenge as NU’s secret weapon in the draw circle. In Sunday’s win over the Pioneers, Girardi secured a career high of 12 draw controls. She said the team feels ready for their opponents and will just focus on their own game as they prepare for Saturday.

“I always matchup really well against her,” Girardi said. “We’re going to play our game and dominate on the draw control everytime we step up (to the circle).”

After the Sweet Sixteen, Izzy Scane set the new single season goal scoring record with 89. She leads the program, and the nation, in goals and was recently named a Tewaaraton Award Finalist. NU’s lead scorer is prepared to square off with Duke, since she was a member of the 2019 team that beat the Blue Devils but suffered a blowout loss to Maryland in the NCAA Final Four.

A lot is at stake for the Cats, including their undefeated season.

Regardless, Amonte Hiller wants her team to play fearless throughout the tournament. She said the Cats have watched a ton of film during this postseason to prepare for the Blue Devils, and Scane agreed, emphasizing the importance of using footage to prepare. In addition, Scane said the home advantage was “huge benefit” for NU.

“It’s amazing seeing so many Northwestern fans,” Scane said. “Being able to be home and feel the presence of the entire Northwestern community and families and friends is really awesome.”

On Wednesday, NU announced that it will allow students and fans into the stadium to support the Cats in their semifinal matchup highlighting a sense of normalcy and pre-pandemic times.

Amonte Hiller acknowledged the skepticism circulating in the lacrosse community about the Cats because of their conference-only regular season schedule, but she said their performance on the field will put those rumors to rest.

“It’s up to us to go out there and show our team,” Amonte Hiller said. “There’s a lot of good teams out there, but we’re going to show that we’re one of the best everytime we step on the field.”