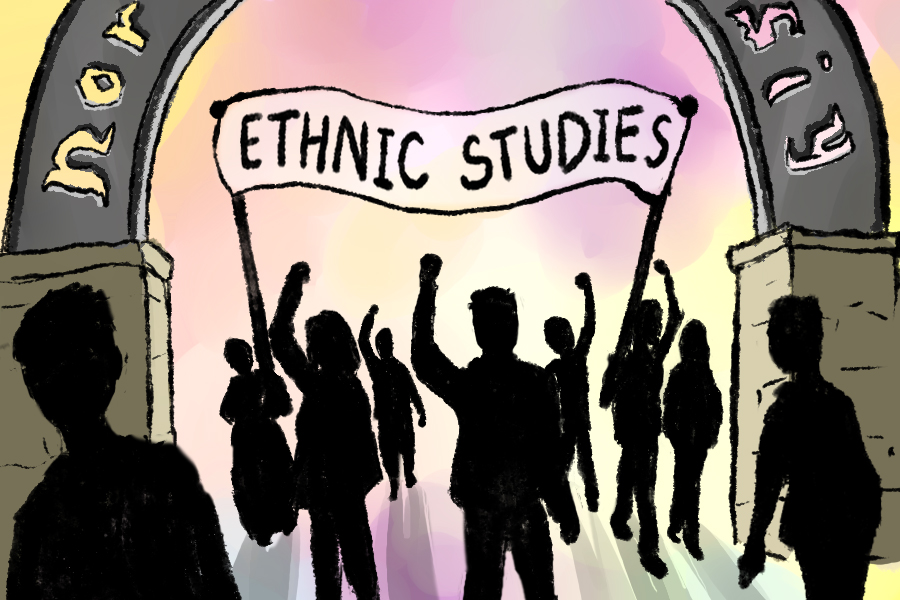 Student advocacy has been central to creating a major and a minor, expanding the curriculum and increasing hiring in ethnic studies. Today, students and faculty continue to advocate for AASP and LLSP departmentalization. (Illustration by Hank Yang)

Student advocacy has been central to creating a major and a minor, expanding the curriculum and increasing hiring in ethnic studies. Today, students and faculty continue to advocate for AASP and LLSP departmentalization.

Since students led a 23-day hunger strike in 1995 to institute the Asian American Studies Program, the demands of activists have continued to be linked to ethnic studies at Northwestern.

Starting in 2006, students and faculty advocated for the creation of the Latina and Latino Studies Program, which began around 2008, according to LLSP Director and Prof. Geraldo Cadava.

After the programs were established, students continued to push for the expansion of ethnic studies through events, discussions with faculty and administrators and numerous petitions. Student advocacy has been central to creating AASP and LLSP majors and minors, expanding the curriculum and increasing hiring in ethnic studies, according to AASP Director and Prof. Nitasha Sharma.

Despite this progress, the push to turn AASP and LLSP into recognized departments continues.

Arianna Hermosillo (Medill ’10), the first student to major in Latina and Latino Studies at NU, said the sustained fight for departmentalization is personal — the lack of department status highlights a longtime national issue of people in power depriving marginalized communities of resources.

Expanding ethnic studies is vital, she said, as it would create an inclusive community on campus and ensure students are receiving a holistic education.

“Racial discrimination… (and) people feeling uncomfortable on campus because of who they are and their identity is very much tied to a lack of ethnic studies and access to education about where different people are coming from and what their experiences are,” Hermosillo said. “We can’t say in one breath that students from ‘diverse backgrounds’ are important to us, but their histories aren’t.”

In 2018, AASP and LLSP were granted the ability to hire and tenure faculty with the creation of the Council for Race and Ethnic Studies, a unit that includes AASP and LLSP. However, Cadava and Sharma said CRES hasn’t solved all the obstacles ethnic studies professors face.

Prior to the creation of CRES, all professors in AASP and LLSP were required to be part of a department in addition to their programs. Sharma said this resulted in ethnic studies professors being responsible for twice the amount of committee and service work.

CRES allowed AASP and LLSP to hire their first tenure track professors without a connection to another department. But Cadava said applying this change to current professors requires them to move their tenure track into the purview of new departments, which isn’t an easy transition.

Sharma added that CRES gave current ethnic studies professors additional responsibilities, including attending quarterly meetings and reviewing fellowship and tenure applications. She said it’s a significant amount of extra work for which there is no built-in support in terms of course releases, time off or funding.

Furthermore, AASP and LLSP are still classified as programs rather than departments. This leads to high faculty turnover, Sharma said, which means faculty are less available to students and can’t provide steady course offerings.

“In departments, you don’t have that turnover because you have enough tenure track faculty (who are) compensated well, who love their jobs, who stay and are committed to the field and to their students,” Sharma said.

Through conversations with faculty and program directors, Wang said she realized many overextended ethnic studies professors hold marginalized identities. She said these professors create “safe havens” for marginalized students at Northwestern, providing them with emotional support and informal career counseling. While this is incredibly valuable to students, it also causes these professors additional labor.

“If you want to go into a nontraditional or non-professionalized field, the support is often not there (through formal resources),” Wang said.

AASP and LLSP also struggle with a lack of funding, which limits students’ ability to conduct research, said Asian American Studies and History Prof. Ji-Yeon Yuh, the founding director of AASP. She said graduate students have an especially difficult time getting funding in the early stages of their work — an issue she hopes to see resolved soon.

In an email to The Daily, University spokesperson Hilary Hurd Anyaso said NU is actively hiring faculty in departments and programs that focus on ethnic studies and has increased operating budgets for ethnic studies programs in recent years. The University did not respond to a request for comment on whether it’s considering departmentalization or additional funding.

Today, students continue to advocate for the expansion of ethnic studies. In a May 1 letter to NU administrators, Northwestern Asian American Pacific Islander Desi American groups called on the University to support students through action amid the rise of documented Anti-Asian violence.

Weinberg sophomore Quynh-May Nguyen, co-president of the Vietnamese Student Association and the organizer of the letter, said the groups are calling for the University to departmentalize AASP and Middle Eastern and North Studies Program in order to create a permanent, safe space for students.

“It’s important to note that Northwestern has a student population of 20 percent Asian or Asian American students and there is still no official department for permanent faculty for us to rely on and come to when we need support,” Nguyen said.

Kevin Luong (Weinberg ’16), who was among the group of students that successfully advocated for the establishment of an Asian American Studies major, said student activists face several consistent obstacles.

The University’s resistance to expanding ethnic studies without strong demonstrated student interest puts the burden of creating change on students, they said. It can also create what Luong described as a “chicken and the egg problem” — sometimes it can be difficult to garner student support for something that has yet to be created.

Another issue with the process of creating change at NU, Luong said, is that these responsibilities often fall on students with limited time and resources.

“The burden, more often than not, is put on these students who are marginalized, socioeconomically, and are having a harder go with things in college, but are also the ones always at the front lines in terms of trying to build a better school for everyone,” Luong said.

In addition to student activists, several professors have been advocating for change, Yuh said. For the past few years, faculty have been pushing for a course requirement related to social inequalities.

In 2019, faculty passed a slightly different distribution requirement: “When Cultures Meet.” The overlay required all students to take one course about contact between different cultural groups in the U.S. and one about contact outside the U.S.

“It completely goes against everything that students and faculty wanted to have for a social inequalities distribution requirement,” Yuh said. “As if during the Atlantic slave trade, African peoples and European peoples ‘met’? … As if when Asian people were being brought over as contract labor for the railroad and for sugar plantations and being exploited and beaten by supervisors, that was ‘cultures meeting’?”

While students and faculty continue to advocate for departmentalization, Cadava said the most important thing to him is increasing the presence of ethnic studies on campus.

“It can feel, when you’re working in Latino Studies and Asian American Studies, like you occupy some small corner of campus,” Cadava said. “I do hope that we continue to grow into and be seen as a center of exciting and active research and teaching.”

According to Sharma, Yuh, Wang and Hermosillo, the lack of departmentalization parallels a nationwide trend of educational institutions devaluing ethnic studies programs.

Sharma said she believes one of the reasons institutions don’t prioritize ethnic studies is that the histories taught in these programs are considered to be “dangerous knowledge.”

“Ethnic studies really talks about power and institutions,” Sharma said. “It’s sort of an internal critique of the institution of higher education within that institution.”

Sharma also said the study of race is often deemed irrelevant, and questioned whether NU views ethnic studies as a field of intellectual priority.

Yuh added that departments have a presence on campus that programs do not, which gives them more say in decision-making.

“Departments tend to have the authority to accumulate more budget, more resources, argue for more faculty lines, etc.,” Yuh said. “Once you become a department, you’ve gotten your foot in the door to start arguing to grow.”

Wang stressed the importance of expanding ethnic studies and encouraged students to take classes in these programs.

“(Asian American Studies) crafted me into the person that I am today and gave me the perspective that I have today — it allowed me to have an accurate understanding of how our society in our world is structured and why it’s structured the way it is,” Wang said.

Wang also urged administrators to respect student organizers and understand they have significant knowledge surrounding the topics they advocate for.

Sharma said she hopes to see a combined effort from AASP, LLSP, the Center for Native American and Indigenous Research and the African American Studies Department to ensure all NU students graduate with a full understanding of the United States.

“It’s really important for all students to be able to learn about Asian American Studies and Latina and Latino Studies, because these are questions about race, about societal inequality, about immigration, about diaspora, that we can’t learn fully without these kinds of givens,” Sharma said. “They’re not supplementary — they’re core to our understanding of what the United States is.”

— Kang: In support of ‘To Be Departments’ campaign for AASP, LLSP