The Daily Northwestern • May 19, 2021 • https://dailynorthwestern.com/2021/05/19/campus/after-pandemic-hiatus-black-formal-returns-in-homecoming-themed-virtual-and-in-person-events/ 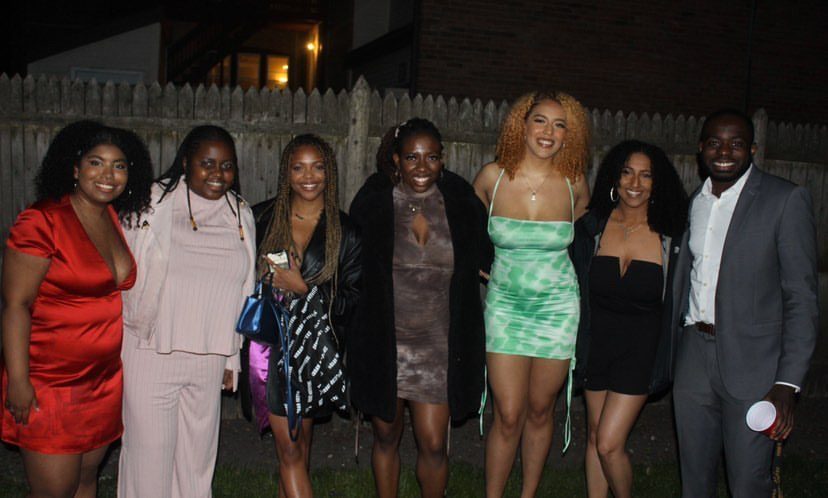 The Black Formal executive board. They gathered in a backyard for one of two live feeds that comprised the Homecoming-themed Black Formal.

In 2016, Northwestern released a 150-page report of Black students’ experiences of discomfort, isolation or neglect in campus groups and social events. Six Black students were moved to host the first-ever Black Formal just a year later.

Since then, Black Formal has become an annual tradition for NU’s Black community, aside from a pandemic-related hiatus last year. Over 130 students took part in this year’s May 15 formal, which combined virtual and in-person programming and centered around the theme of Homecoming.

Black Formal co-chair and Weinberg senior Meron Amariw said the executive board sought to make students feel as welcome as possible in an online format.

The event included a photoshoot with two student photographers at Norris University Center, where students could have photos taken in front of a Black Formal-themed backdrop. A student emcee at Norris interviewed students during the event, many of whom were decked out in formal attire.

Simultaneously, the event’s executive board gathered off-campus and logged on to the event with a professional DJ. There, they announced winners of giveaway prizes, including gift cards, gadgets and items from Black-owned businesses.

To engage students, the board also organized a spirit week leading up to the event, Ruffin said. The spirit week programming included a dance challenge choreographed by Afrothunda Dance Troupe, a playlist from CaribNation, outfit inspiration collages created with Stitch Magazine and a tribute video for Black seniors.

Co-chair Tamunodiyepriye Ngo said the board chose the event theme to celebrate the formal’s return after last year’s cancelation.

“We, as a Black community, have been apart due to the pandemic, and it’s been a lot of difficult times,” the Weinberg senior said. “This is kind of us having a homecoming, everyone returning to show our resilience and to show that there’s light at the end of the tunnel.”

As co-chair, Ngo said she spent much of the past year writing grant applications, emailing the Department of African American Studies and the Northwestern Black Alumni Association and soliciting donations through Catalyzer to fund the formal.

While Black Formal has applied for recognition as an official student group twice, Ngo said they have been rejected and therefore denied funding from Associated Student Government.

“It’s really difficult for us to build up the capital that a lot of other organizations have on campus because we don’t get funding from the school as they do,” Ngo added.

Because the future of Black Formal is contingent on underclassmen organizing and fundraising for the event themselves, marketing director Mikayla Williams said the executive board of juniors and seniors focused on engaging freshmen.

Many freshmen have reported feeling an absence of Black community on campus this year, given the pandemic and lack of a central community space like the Black House.

“We just felt so bad for first years because it’s already tough in general being Black on this campus,” Williams said. “(The formal) was a way for them to see the Black community and see us coming together and having a good time.”

The one in-person formal she attended in 2019 helped her feel part of a community, the SESP junior added.

“(The formal) is really important to us,” she added. “We want this to be a tradition because I really think it’s a very beautiful thing.”

— With Black House set to reopen fall 2021, students reflect on the community missed during renovations

— University report: Being a black student at Northwestern is ‘exhausting’