The Daily Northwestern • May 17, 2021 • https://dailynorthwestern.com/2021/05/17/sports/softball-on-senior-day-northwestern-earns-third-consecutive-ncaa-tournament-appearance/ 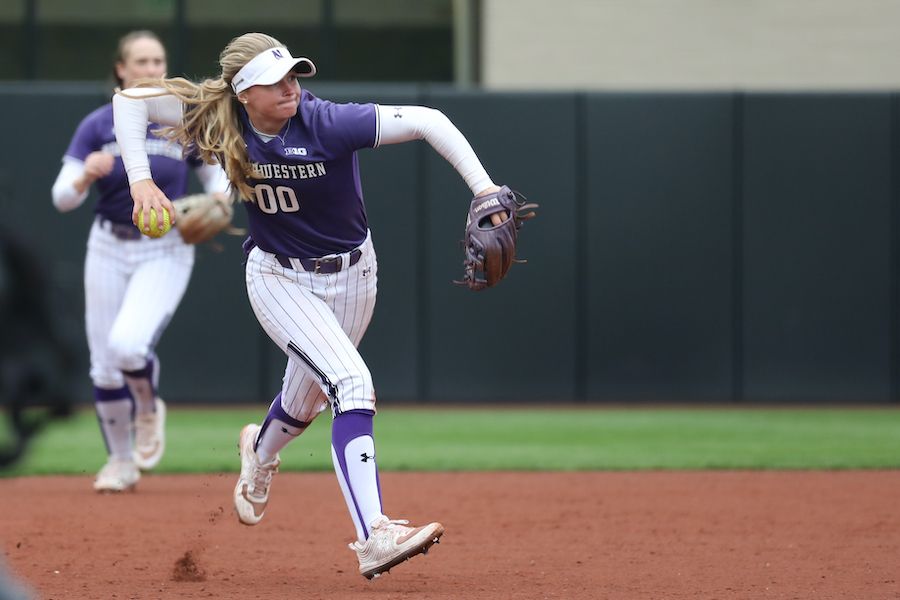 Mac Dunlap prepares to throw the ball. Dunlap, one of four Senior Week honorees, hit her first home run of the season on Friday.

Heading into the series against Nebraska, Northwestern was on the bubble for the NCAA Tournament. Coach Kate Drohan knew that the Wildcats’ postseason chances would rest on their performance over the weekend.

“My team understood that we needed to take care of business this weekend, so that was pretty motivating in itself,” Drohan said. “My job all weekend was to make sure they didn’t get too tight.”

NU took three out of four against Nebraska, giving the Cats their first series win since April 18. Despite inconsistent results over the past month, the NCAA selection committee deemed NU’s season — which started with nine straight wins — good enough to merit a postseason bid.

On Friday, the Cats will head to Lexington to face No. 14 Kentucky, who won seven of their last eight games — including five against teams in the NCAA Tournament field.

The selection marks the Cats’ sixth tournament appearance in the past seven uninterrupted seasons. Kentucky will also be NU’s first non-Big Ten opponent of 2021.

“I’m not into the emotional part of it,” Newport said. “For me, it was just a celebration of all the things… I got to experience and accomplish.”

“I’m really happy with the way our offense is coming alive right now and feeding off each others’ at-bats,” Newport said.

After a 45-minute rain delay, Saturday’s doubleheader was cleared to begin. NU easily captured the early game, invoking the eight-run rule after a double from sophomore pitcher Sydney Supple put the game out of reach in the sixth inning.

The afternoon contest was closer. NU claimed an early lead, but the Cornhuskers kept it competitive with back-to-back home runs from Peyton Glatter and Brooke Andrews. Down to Nebraska’s last strike, Cam Ybarra hit a two-run single off Williams to put the Cornhuskers ahead 5-4, the eventual final score.

“We stuck with Danielle, and she and I talked about it after the game a little bit. I think she learned a great deal from that moment,” Drohan said.

Sunday’s finale was back-and-forth. Nebraska only managed one run after loading the bases with no outs. Supple’s second-inning RBI single tied the score, and then Newport narrowly missed the scoreboard on a two-run home run, her team-leading tenth this season.

The Cornhuskers tied the game in the fourth inning, but three Cats knocked in runs to establish a three-run lead. NU survived late homers from Nebraska’s Rylie Unzicker and Tristen Edwards for a 6-5 victory.

The Cats are now 23-0 in games where they score five or more runs.

“I’m glad I was able to go seven innings,” Newport said. “(With) my role, that’s never what I’m expecting or what I want to do, it’s just (to) keep giving to the team until someone can give more than me.”

Looking ahead to next week, Drohan and the coaching staff have already started scouting all three teams in their regional. Notre Dame, who NU has met six times since 2013, will play Miami (OH) after the Cats’ game concludes, with the winners and losers facing off to continue the double-elimination format.

Newport, familiar with many of Kentucky’s players through travel ball experience, said she is eager to play with something to prove.

“It’ll be the Big Ten’s welcome to the rest of NCAA softball,” Newport said. “I’m excited for it.”