The Daily Northwestern • May 16, 2021 • https://dailynorthwestern.com/2021/05/16/sports/lacrosse-northwestern-rolls-past-denver-to-advance-to-ncaa-quarterfinals/

Lacrosse: Northwestern rolls past Denver to advance to NCAA Quarterfinals 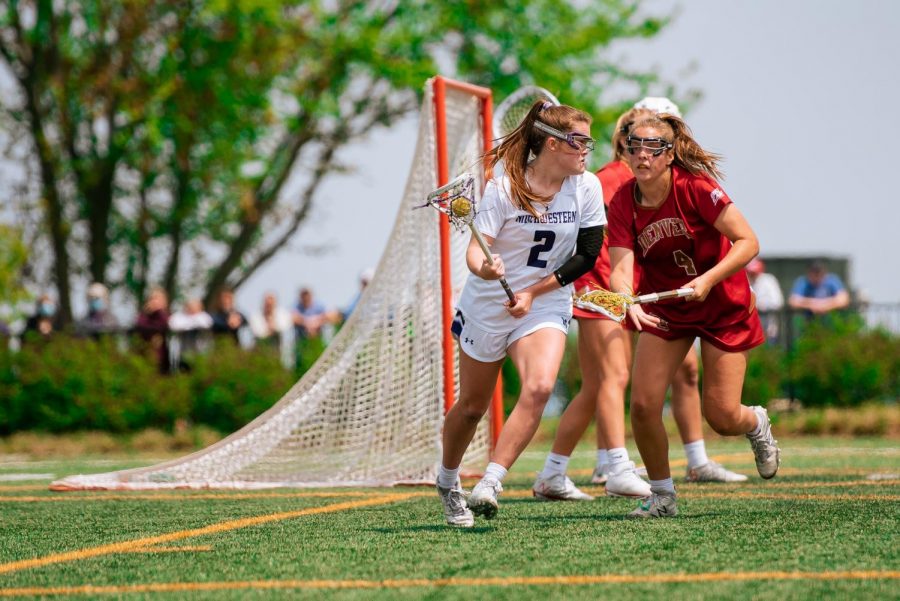 Northwestern secured its first non-conference victory of 2021 by defeating Denver 19-4 on Sunday in Evanston to advance to next weekend’s NCAA Quarterfinals.

Even though the Pioneers (16-2, 10-0 Big East) scored first, the No. 2 Wildcats (14-0, 13-0 Big Ten) never let them lead again by putting on an offensive clinic for the rest of the matchup, including a 10-0 scoring run spanning the entire second half.

Junior attacker Izzy Scane led the Cats with eight goals and broke the program’s single-season goal record in the process. Sophomore attacker Erin Coykendall played a big role on the offensive side as well, totaling six assists — four of which went to Scane.

“She’s unreal,” Coykendall said of Scane. “You can always count on her to finish the passes you’re giving her. She draws attention from other teams, but her (still) being able to find those openings and me being able to hit them, opens up a lot for us.”

NU’s defense was key to their powerful performance.

“Our defense, we’re just gelling together,” Girardi said. “We all had each other’s backs.”

Girardi also played an important role for the Cats on the draw control. She notched 12 of NU’s 21, giving the Cats more offensive looks and paving the way to victory. In total, NU won 21 draws to Denver’s five.

Girardi said her teammates and coach Shelby Fredericks, the program’s all-time leader in draw controls, have been crucial to the team’s success off the circle. She added that approaching the draw with confidence and relying on her teammates for help have played a key role in her circle play.

While the Cats certainly did not have a slow first half, the team found its groove in the second, shutting out Denver entirely and scoring 10 straight. Scane played a significant role in that, going from scoring three in the first half to five in the second. She credited “amazing feeds” from her teammates to power her play in the final 30 minutes. She added that the offense as a whole took more time to finish their shots in the second and did a better job getting their shots on goal.

Coach Kelly Amonte Hiller agreed with the sentiment, saying NU focused on improving its shots during the final 30 minutes.

“We had a lot of shots in the first half we didn’t finish as well as we wanted to, and we were able to do that in the second half,” Amonte Hiller said.

She also said the team’s first round bye played a part in their second half domination as well, as the team had the weekend to rest and was prepared to play a full, competitive 60 minutes.

Beyond advancing in the tournament, Coykendall said it was a “really good feeling” to win out of the Big Ten and “make a statement,” especially coming out of a conference-only regular season.

Amonte Hiller added the victory is one way to show the country NU’s abilities.

“There’s still a lot of doubt about our team out there, and it’s up to us to go out there and do our best every game and show what our team is all about,” coach Kelly Amonte Hiller said. “Today was the first step. Next week will be the next step.”

Now, the Cats look to the NCAA Quarterfinals against No. 7 Duke in Evanston next weekend.

Amonte Hiller said NU has watched some of the Blue Devils’ 2021 games. Additionally, she has personally worked with junior attacker Maddie Jenner — who takes most of Duke’s draw controls — because she played on the 2019 U.S. Women’s Lacrosse U19 team that Amonte Hiller coached.

“We’ve been watching them and the other top teams in the country,” Amonte Hiller said. “We’ll be very excited to host them and play against a really strong opponent.”

— Lacrosse: How Izzy Scane went from the backyards of Michigan to front and center in the Big Ten