The Daily Northwestern • May 14, 2021 • https://dailynorthwestern.com/2021/05/14/sports/softball-northwestern-looks-to-end-regular-season-on-high-note-against-nebraska/ 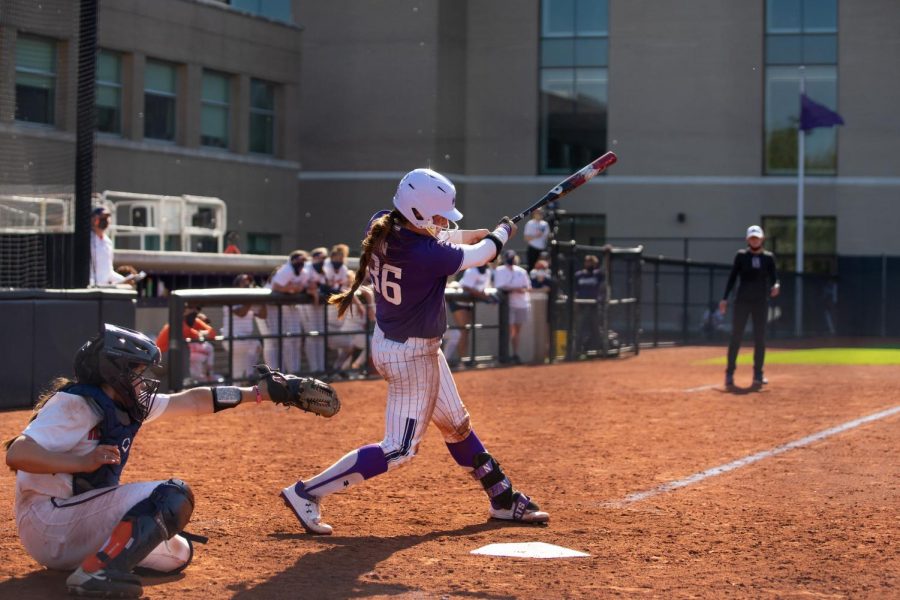 With three teams close behind in the standings, Northwestern will look to maintain its top-three position in the conference at home against Nebraska this weekend.

The Wildcats (26-14, 26-14) split last weekend’s closely contested series with Purdue, including three games that were decided by a single run. The 2-2 series was the Cats’ second in a row after alternating wins with Illinois two weeks ago.

Meanwhile, the Cornhuskers (21-19, 21-19 Big Ten) have been inconsistent recently, losing three out of four showdowns against Iowa in a low-scoring series. The four upcoming matches will be the final contests of the regular season.

“Playing four games, there’s a lot of momentum swings,” coach Kate Drohan said after the Illinois series. “You got to really understand how to manage your pitching staff.”

Drohan’s squad is known for its batting this season, but it was the team’s defense that rose to the occasion against the Boilermakers. NU allowed three combined runs in the final three games, including a shutout from junior pitcher Danielle Williams in the second game of Saturday’s doubleheader.

Now, NU hopes to reawaken its bats when it hosts Nebraska. The Cats lead the Big Ten in runs scored this season and are second in batting average, hits and total bases.

NU’s offensive production has come from all across the team in 2021. Junior center fielder Skyler Shellmyer and junior catcher Jordyn Rudd are third (.374) and sixth (.351), respectively, in batting average in the Big Ten. Additionally, graduate utility player and pitcher Morgan Newport has amassed 32 RBIs — the second-most in the Big Ten —  while junior shortstop Maeve Nelson’s 11 doubles are top five.

“We needed to just be aggressive on the pitch we wanted to hit, instead of being unsure,” Rudd told The Daily two weeks ago. “That really helped us learn more.”

No player in the conference, however, has scored more runs than senior second baseman Rachel Lewis. She also has Big Ten-leading totals in triples and stolen bases.

The Cornhuskers have their own weapons, too. As a defensive unit, Nebraska’s 21 double plays rank best in the conference and 13 more than the Cats. Behind the plate, center fielder Tristen Edwards tops the Big Ten with an 0.589 on-base percentage and shortstop Billie Andrews is among the top five in both runs and runs batted in.

The two hitters have combined for roughly one-third of the Cornhuskers’ RBIs on the season, and will likely pose a challenge to NU’s defense.

“I don’t strike people out,” Newport said on May 2. “So it’s really great to see my defense (succeed) and have them make plays for me. That’s how this team builds momentum.”

As the clashes with the Cornhuskers mark the Cats’ final matches of the season, NU will recognize players like Newport, graduate outfielder Emma Bartz and senior outfielder Maegan Hollins during Senior Week. Newport pitched all seven innings in the second game against Purdue, allowing just three hits, while Bartz and Hollins made pinch-running appearances.

“This team competes really hard, and loves the game and loves each other,” Newport said.

— Softball: Northwestern looks to bounce back against Illinois after losing series against No. 19 Michigan