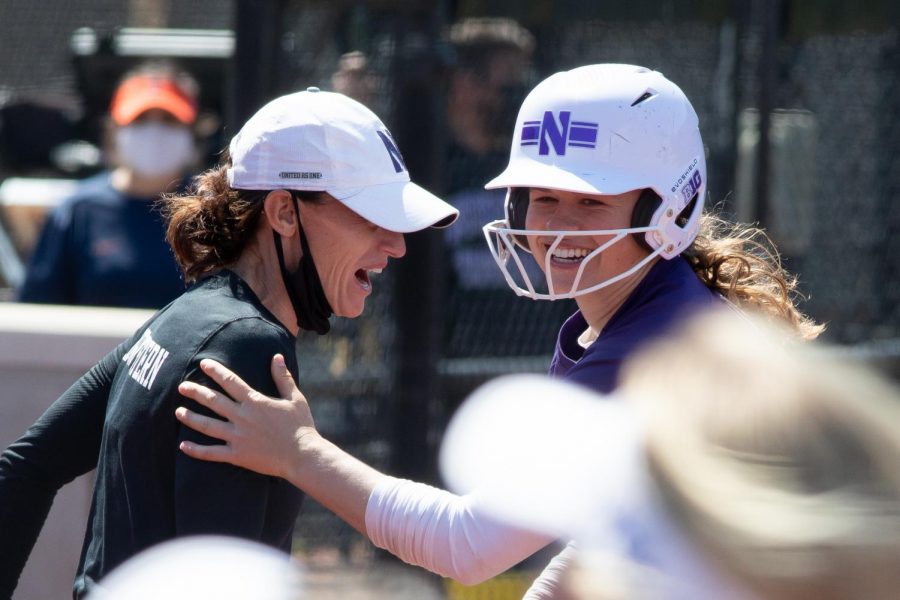 Morgan Newport celebrates with coach Kate Drohan after hitting a walk-off home run to beat Illinois on May 1. Newport has played a central role in the Cats’ success over the past five years. (Daily file photo by Joshua Hoffman)

Morgan Newport celebrates with coach Kate Drohan after hitting a walk-off home run to beat Illinois on May 1. Newport has played a central role in the Cats’ success over the past five years.

AND is in her DNA: Morgan Newport has filled every role Northwestern softball has asked of her

Northwestern’s second home game of the 2021 season had turned into a slugfest. The Wildcats led Wisconsin 13-7 in the top of the fourth inning, but after freshman starter Lauren Boyd reached 90 pitches before completing the fourth, coach Kate Drohan made a call to the bullpen.

So, in came the right fielder.

But Morgan Newport was no ordinary right fielder. The fifth-year senior played a key role on the Cats’ pitching staff as an underclassman before shifting to the outfield her junior year. Although her time in the circle was limited, she was always ready at a moment’s notice.

On that Saturday afternoon, Newport did a little of everything. She went 4-for-4, including a two-run home run, and allowed just one hit after entering the circle as NU won 15-7.

“When the game asks you to do multiple things, it’s kind of nice,” Newport said. “I love being able to pitch and play outfield and hit because doing the same thing over and over again — it’s not as fun.”

That day in late March epitomized Newport’s versatility and how she has put everything together during her final season. In each year of her career, she’s had a different primary role.

Newport starred on both sides of the ball in high school and with her club team in DeKalb, Illinois. But she was mainly a pitcher during her first two seasons in Evanston.

She pitched primarily in relief as a freshman, when the Cats got off to a 1-10 start and never fully recovered. But pitching coach Michelle Gascoigne said the experience Newport gained that year was critical for her future success.

“She’s always had a really good mentality, just doing whatever the team asked her for,” Gascoigne said. “As a freshman, she wasn’t afraid to speak up or ask questions and that has gone a long way for her.”

Newport logged 83.2 innings in 2017, compiling a 3.85 ERA and hit just .194 in limited at-bats. Former NU catcher Sammy Nettling was a calming force for Newport in her first two years, helping her quickly put mistakes behind her.

“Every out that you make, every error you make in the field, it just seems really big your first couple years,” Nettling said. “We’re all going to make mistakes and it’s a very long season. That was something I tried to instill with her.”

Newport was expected to play a similar role in the circle as a sophomore. After all, the Cats had five pitchers on their staff and wouldn’t need her much.

But then Kaley Winegarner tore her ACL, Kenzie Ellis left the program for personal reasons and Nicole Bond was ineffective. That left Newport and then-freshman Kenna Wilkey to carry the staff for the final three months of the season.

Newport ended up playing a huge part in NU’s resurgence — the Cats’ 38 wins that season were their most in a decade. She pitched a shutout in early March against No. 11 Alabama that kick-started a 10-game winning streak and threw a five-inning no-hitter in the Big Ten Tournament semifinal against Michigan State.

“We relied on her heavily,” Kate Drohan said. “Each year she gained more and more responsibility. Every time the game or our team asked something of her, she stepped up.”

NU returned to the NCAA Tournament in 2018, playing in the Athens, Georgia Regional. There, Newport faced a new kind of adversity: illegal pitches. Under the rule, pitchers cannot have both feet off the ground during delivery, and receive the penalty of a ball on the batter if called on it.

Newport and Wilkey were breaking the rule that weekend, but so were pitchers from their opponents, California and Georgia, as well as the majority of pitchers nationwide. However, the umpires focused exclusively on the Cats’ duo during the Regional, forcing Newport to sometimes get batters out two or three times.

She and NU fought through it all, though, to beat the Golden Bears twice and advance to the Regional final before losing to the No. 7 seed Bulldogs.

Regardless of whether the illegal pitch drama was a factor, Newport pitched less as a junior, instead becoming the Wildcats’ primary right fielder. Drohan said the motive was to get her more at-bats, and in 2019 she made her most progress offensively.

Just like 2021, Newport’s best game of the 2019 regular season was against Wisconsin. On April 13, she hit a two-run homer in the first inning to give the Cats the lead, then came in from the outfield to pitch in the fifth, holding the Badgers hitless for the last 2.1 innings to help NU to an 8-5 win.

“Being in the outfield has been really great for me because I’m kind of an adrenaline junkie,” Newport said. “(It) allows me to feel that adrenaline and the momentum of the game even when I’m not in the circle. So it actually really helps me to transition.”

Newport’s services weren’t needed much in the circle, thanks to then-freshman Danielle Williams, who threw more than half the Cats’ innings en route to NFCA National Freshman of the Year honors. But Newport rebounded from an offensive slump to help NU win an NCAA Regional on its home field and advance to its first Super Regional since 2008.

She went 8-for-16 that weekend, including a 4-for-4 performance in an elimination game against Southern Illinois. Newport then hit a key two-run double in the Regional final the next day as the Cats defeated Louisville to move on.

Newport was primarily an outfielder again in the shortened 2020 season, appearing just four times as a pitcher. But when COVID-19 ended the season abruptly, she knew she didn’t want to be finished. As a member of the Student-Athlete Advisory Committee, Newport advocated for spring-sport athletes to get an extra year of eligibility, which they were granted on March 30 of that year.

“The day after our season got canceled, Kate called me and said, ‘Will you come to my office?’” Newport said. “We’re both still dry-eyed from all the crying we’d done the day before. It was the easiest no-brainer for me. I just felt so unfinished with the game.”

NU is on the NCAA Tournament bubble entering the final weekend of the regular season, but had Newport not returned, the Cats might not be anywhere near the postseason. She has improved all facets of her game this year, particularly her power.

Newport’s eight home runs in 2021 are more than in her previous four seasons combined, and she is currently second in the Big Ten with 32 RBIs.

“I’ve always been really obsessed with mechanics and how it all works,” Newport said. “But this year, I feel like I’ve taken my game to a new level in understanding my swing. And that helps me with making adjustments quicker.”

She’s provided several clutch moments, from a go-ahead two-run triple with NU down to its last strike in mid-March against Ohio State to a two-out walk-off home run earlier in May against Illinois. In the circle, Newport went more than 24 innings before giving up an earned run.

This weekend’s series against Nebraska will be her last time playing at Sharon J. Drysdale Field, but Newport said she feels she’s leaving the game with a sense of peace. She is currently pursuing a master’s degree in sports administration and wants to stay involved with college athletics following her time with the Cats.

“I hope that what I’ve imparted on my young teammates is how big of an impact you can make when you really intentionally care for them,” Newport said. “That’s what I hope to impart on this program — the importance of that kind of compassion and how it can impact the team on the field.”

— Softball: Balance, versatility fuel Wildcats to sweep of No. 25 Wisconsin