The Daily Northwestern • May 14, 2021 • https://dailynorthwestern.com/2021/05/14/ae/nu-alumna-kathryn-hahn-talks-wandavision-and-future-projects-in-ao-event/ 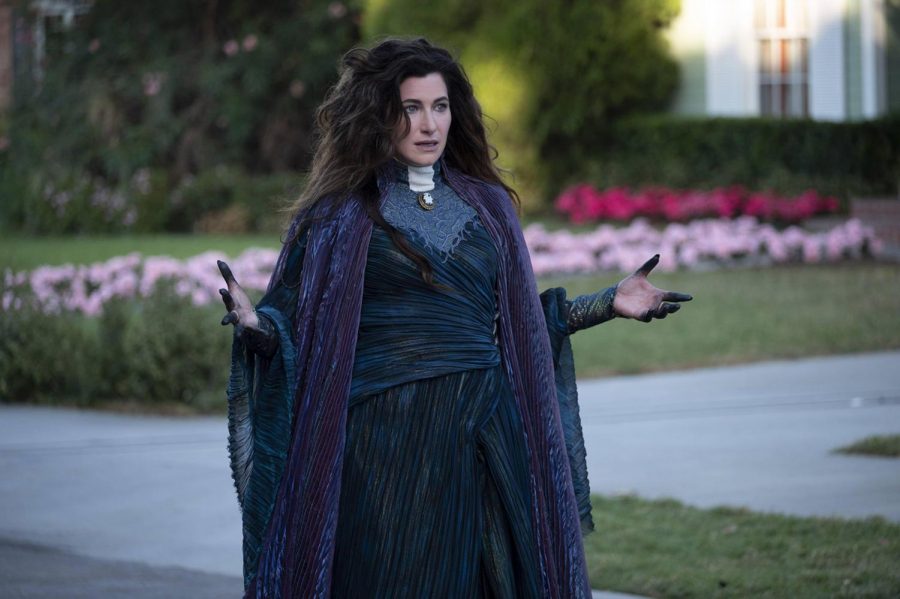 Kathryn Hahn (Communication ’95) as Agatha Harkness in Marvel Studios’ “WandaVision.” The Northwestern alumna spoke at an A&O Productions event where she discussed “WandaVision” and future projects, and reminisced about her time at NU.

The “Hahnaissance” is just beginning — and Kathryn Hahn (Communication ’95) told Northwestern students she never expected her career to take off in the way it has over the past few months.

At a Thursday event hosted by A&O Productions and moderated by Communication Prof. Jeffrey Sconce, Hahn spoke to attendees about her experience performing in hit productions such as “WandaVision” and “Parks and Recreation,” and reminisced about her time at NU.

Hahn’s recent rise in popularity, noted by publications like Variety, has been attributed to her performance as Agatha Harkness in “WandaVision.” She said she ascribes her meteoric rise, which shows no sign of stopping, to her artistic individuality.

“What makes you special, your superpower as an artist, is your individuality,” Hahn said. “That acknowledgement is like a fire that can clear the lens through which you see the world as it is, which is key to discovering your own artistic expression.”

Hahn took on the role of Harkness, which included a surprise reveal near the end of the miniseries, after spending a day at Marvel Studios’ office talking to executives and seeing storyboards. From there, she became invested in the role — the “nosy neighbor” turned all-powerful sorceress.

The project was unique, Hahn said, because instead of playing an archetype, the show allowed her to explore a morally ambiguous area with her performance.

“The main villain of the show, I would say, is grief, Hahn said.” “Scarlet Witch wasn’t certainly all hero, and I wasn’t all villain, so it occupied this really delicious gray area that I was really attracted to.”

Hahn said she always knew that there was “no other choice” for her career than becoming an actor. She said a well-rounded, liberal arts education was the best way for her to cultivate her multifaceted interests, setting her sights on NU from an early age.

Hahn reminisced about her times working at the Unicorn Cafe, complaining about the howling, cold, winter wind and standing mesmerized by the “sheer beauty of Deering Library.”

“I worked so hard to be there,” Hahn said. “I knew what a good school it was and a liberal arts education was very important to me as a performer.”

Hahn attributed her transition from the stage to the screen to her education at NU, a point brought up by Sconce.

Sconce said the climactic build up seen on stage is lost on-screen as scenes are shot out of order and reshot multiple times. As a result, actors can experience difficulties in maintaining momentum. But Hahn said her time at NU prepared her for that.

“At NU, I learned you have to be your own emotional dramaturg, you have to know the script from beginning to the end, inside and out,” Hahn said. “If you’re trained to know the beats, to know where you are headed, it’s impossible to lose that momentum.”

At the event’s question and answer section, attendees had the opportunity to interact with Hahn and ask questions. Hahn discussed working on NBC hit sitcom “Parks and Rec” and expressed her love for actor Amy Poehler and the show’s writing staff.

She said playing political strategist Jen Barkley in the show was an incredible opportunity, and loved seeing how positively fans reacted to her.

“‘Parks’ was so much fun,” Hahn said. “Before shooting, she would invite all the ladies to her trailer for an impromptu ‘dance party’ to get us all in the spirit.”

Harkness and Barkley are just two of Hahn’s most well-known roles in a career that spans genres and mediums. Communication sophomore Isabella Moran praised the actress’s tenacity and commitment, and said she’s excited to see what Hahn does next.

The “Hahnaissance” is just getting underway –– Hahn was recently casted in Rian Johnson’s “Knives Out 2” and will be starring alongside Paul Rudd and Will Ferrell in “The Shrink Next Door,” a dark comedy miniseries streaming exclusively on Apple TV+. Hahn said she couldn’t reveal much about these projects, but said fans will be “in for a treat.”

Leaving viewers with some words of wisdom, Hahn encouraged attendees to make the best of their time at NU.

“Enjoy your time at Northwestern,” Hahn said. “It’s such a privilege to get to attend, and I hope you take full advantage of all that wonderful place has to offer.”