The Daily Northwestern • May 13, 2021 • https://dailynorthwestern.com/2021/05/13/campus/following-mike-poliskys-resignation-northwestern-community-members-call-for-continued-investigation-scrutiny-in-the-search-for-new-ad/ 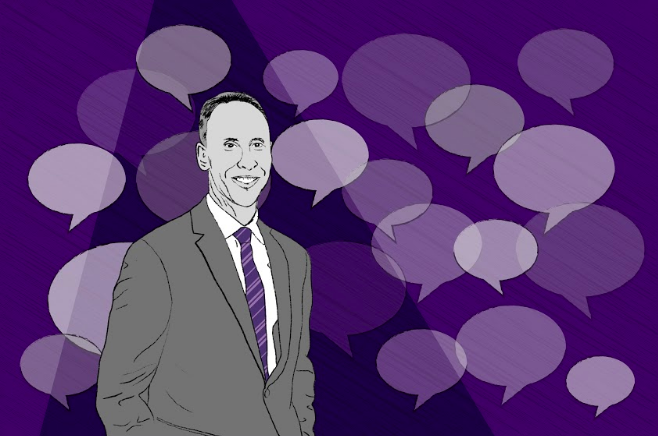 Mike Polisky stepped down after students and faculty called on the University to reconsider the hiring decision.

Ten days after Northwestern announced Mike Polisky’s appointment to athletic director, he resigned and will depart from the University.

Polisky stepped down after students and faculty called on the University to reconsider the hiring decision.

For former cheerleader Erika Carter (SESP ‘18), whose petition to reconsider the University’s decision to promote Polisky garnered over 1,300 signatures, the resignation was a relief.

“I feel like my efforts had been actually going toward something, but then at the same time, I know that the fight is not over,” Carter said.

Carter was among the over 200 faculty, staff, students, alumni and Evanston community members who marched Friday to protest the appointment. NU Community Not Cops also hosted a Saturday noise demonstration in solidarity with NU cheerleaders who had raised concerns about Polisky’s appointment.

In a federal lawsuit filed in January, a cheerleader alleged Polisky did not allow her to meet with then-Athletic Director Jim Phillips about her complaints of sexual exploitation within the cheerleading program. In an independent investigation by The Daily, sources also claimed Polisky failed to adequately address racial discrimination allegations.

Carter said she still believes Polisky violated NU policy. University President Morton Schapiro stated the University engaged an independent investigator who found no such violation in the initial portion of the inquiry. However, Carter told The Daily the University should still investigate Polisky and publicize the investigation’s findings.

In the Wednesday announcement, Polisky said the community response to his appointment prompted his departure from both the role and the University.

“Over the last 10 days, it has become clear to me that the current challenges will not allow me to effectively lead our department, especially during these unsettling times in college athletics,” Polisky wrote. “I do not want to be a distraction to our incredible men and women as they pursue a collective goal — to help our student-athletes become the best they can be.”

Just hours before Polisky resigned, a cohort of student athletes, former students, alumni and donors published a letter in support of his promotion. The letter, tweeted by sports business reporter Darren Rovell (Communication ‘00), stated Polisky’s character is “non-negotiable, and his integrity never wavers.” It called on the Board of Trustees to allow the legal proceedings to complete, and provided a form for supporters to sign their names.

An anonymous student on the cheer team said she was surprised by Polisky’s decision to step down. As hours passed following the announcement, however, she said she grew more frustrated.

“It’s just still made very clear that nobody above Polisky had any intentions of making that change,” the cheerleader said. “He only really stepped down because of the shame factor, because of the controversy.”

Until a new athletic director is appointed, Linguistics Prof. Robert Gundlach will lead the department in the interim. He previously served in the interim role in 2008, and has also represented the University as its faculty athletics representative for the National Collegiate Athletic Association and the Big Ten.

In the release, Schapiro said he plans to share information about the hiring process for the next athletic director in the coming months.

“The students still have some power,” West said. “They can make their voices heard in ways that get the University’s leadership to recognize. It also creates an opportunity for the University to try to do better this time.”

Schapiro’s statement about the resignation continued to praise Polisky, they said, and failed to address any of the systemic problems students have been bringing to the administration’s attention for an extended period of time.

“President Schapiro did not acknowledge why he’s resigning, did not acknowledge Polisky’s role in the harassment… he did not apologize for his mistake in appointing Polisky,” faculty organizer History Prof. Susan Pearson said. “That really shows me that there’s a lot of work left to do with Northwestern, no matter if Mike Polisky is here, no matter if Morty Schapiro is here. There’s institutional and cultural change that still needs to happen.”

Moving forward, the faculty members said in the statement that independent investigations into both the Athletic Department and NU’s Office of Equity will be essential, because both departments failed the students impacted by these complaints.

If Polisky had stayed, Min said circumstances would have remained difficult for his leadership due to community opposition. She said she wondered how long he would have lasted even if he did not resign.

However, Min said the question of how the University will address impact for cheerleaders and student athletes still remains.